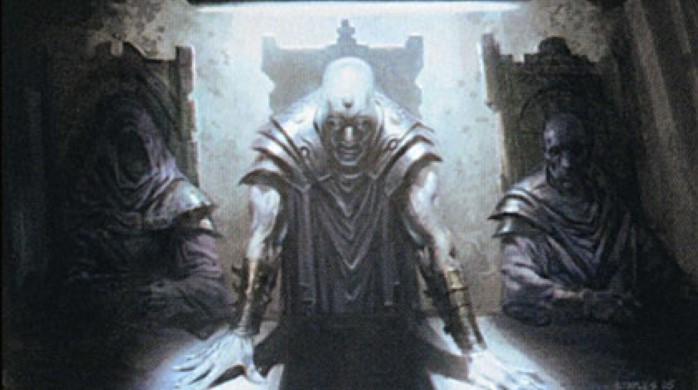 Welcome back to The Toolbox! Here, we take a look at underplayed cards and evaluate where they ought to see more play. Today, we’re taking a look at a disruptive creature that I think is very often overlooked: Vedalken Plotter!

This is a creature that I originally threw into an Adeliz, the Cinder Wind deck on a whim as a creature-based way to interact with lands, similar to Acidic Slime. I expected to be very underwhelmed, but was pleasantly surprised with the amount of work that this card put in. As a 1/1 creature, Vedalken Plotter is not exactly threatening, even in Adeliz. However, the ability to swap an extra Island with an opponent's Gaea's Cradle, Nykthos, Shrine to Nyx, Cabal Coffers, or heck, even a Reliquary Tower, can be extremely useful! There is also the aspect of mana color disruption against more color-intensive decks, such as stealing a Command Tower from a Horde of Notions player. While this can be a very meta-dependent inclusion, I think that the amount of utility and the number of valuable targets make Plotter a worthy inclusion in more decks than those it's currently in.

Zedruu the Greathearted is the most common commander for Vedalken Plotter, and for very good reason. This deck is quite literally dedicated to giving your permanents to your opponents, then benefiting through Zedruu or setting them back with cards like Aggressive Mining, so it's clear why Vedalken Plotter fits so well by disrupting and exchanging permanents.

Then there's Thada Adel, Acquisitor who's based around more of a Theft theme. While Vedalken Plotter is a little bit more of a balanced thief compared to Thada herself (not to mention Pirates like Hullbreacher), they do still fit the bill thematically. Finally, there is Atogatog, who I cannot make sense of, to be honest. I have looked at every card listed on the EDHREC page, and the only synergy that I can find is that Plotter is a good utility creature.

While the top two decks are great fits for Vedalken Plotter, I think that there are a lot of other unexplored commanders, so let's get into it!

Get it? Like, Izzet Wizards? Yeah, I'll see myself out. Seriously, though, Adeliz, the Cinder Wind is one of the more aggressive Wizard Tribal options as a flier that buffs each Wizard whenever you cast an instant or sorcery spell. So let's get into why I think that Vedalken Plotter is a good fit!

Empirically, Plotter has put in work for me when I've played Adeliz. In Commander, there are a lot of "Maze of Ith"-type lands running around that can easily negate the evasion of Adeliz and any damage from her triggers. Having a way that mitigates this issue, gives protection from big creatures, and can turn sideways on its own is huge for a deck like this. Every point of damage, and every Adeliz trigger, adds up to win games.

Vedalken Plotter can also be tutored for with Vedalken Aethermage when there is a problem such as Maze of Ith, and Plotter can also be discarded to Faithless Looting if they're not needed or replaced with Valakut Awakening // Valakut Stoneforge! Due to all the little synergies, and my personal experience, I think that Plotter is an invaluable inclusion for Adeliz. If you don't believe me, take a look at the decklist!

Anyone that has played against Brago, King Eternal knows how much of an eternal pain he can be. His ability to fly and to get extra enter-the-battlefield triggers every turn is what makes him such a powerful option to overtake opponents. Truthfully, this section could be focused on Aminatou, the Fateshifter, Roon of the Hidden Realm, or even Yorion, Sky Nomad. I chose to write about Brago because one of the first times I drafted was Conspiracy, so all the commanders from that set have a special place in my heart.

At a base level, utility lands are becoming more plentiful even within mono-colored decks, with War Room, Field of the Dead, Command Beacon, and all those I named above. This rise makes it even more important to me to have some way to interact with these lands and even benefit from doing so!

To me, this makes Vedalken Plotter the perfect fit as a creature that can be flickered by Brago, King Eternal himself, as well as one that can be tutored for with Recruiter of the Guard or doubled up with Panharmonicon. While this may seem pretty minor, the repeated ability to disrupt opponents' lands can be very major against some decks, such as stealing a Dakmor Salvage from the The Gitrog Monster player. You can call me paranoid, but I think that my paranoia is warranted for a deck that aims to grind games out by leveraging repeated enter-the-battlefield triggers.

Time for the hot contender: Prime Speaker Vannifar! She is an Elf Ooze Wizard, which is just awesome, but more importantly she is basically a Birthing Pod on a stick. This lends herself nicely to be an aggressive creature combo commander, as well as a very versatile toolbox commander. What this means is that she utilizes her tutoring ability to find specific answers, important creatures, and ways to end the game.

Obviously, the Prime Speaker, herself, can find Vedalken Plotter whenever they are needed, as well as other options, such as Woodland Bellower. The ability to borrow a Minamo, School at Water's Edge, Wirewood Lodge, or any of the mana-boosting lands like Gaea's Cradle, and find Plotter at any point is what makes me think they are such a good fit! They can also be copied by Bramble Sovereign if that's really needed.

They can also be used as a form of disruption by limiting the possible points of interaction from opponents through exchanging a tapped Forest for a blue mana source they held up to Counterspell another important piece. It is really impossible to go through all of the possible game states that you could leverage Plotter, but they are numerous! The best thing I can recommend is to take a look at the decklist and even jam some games to test them out.

Happy new year, and I hope that your 2021 is much better than your 2020! I hope that you enjoyed reading this installment and that you've found a new home for Vedalken Plotter. What other commanders do you think pair well with Vedalken Plotter? Do you think that I’m overestimating this card, or do you agree it’s highly underrated? What other cards are you hoping to see get their place in the spotlight? Let’s talk about it in the comments below. Thank you all once again, and please stay safe!