Welcome to Too-Specific Top 10, where if there isn’t a category to rank our pet card at the top of, we’ll just make one up! (Did you know that Clay Statue is the first non-Wall artifact creature with Regenerate?)

We return to a series that will never be finished, because Wizards is releasing sets at a faster clip than I'm releasing these lists: it's the Top 10 Worst! This time around, we take a look at Antiquities, the third set of totally new cards, the second expansion set, and the very first artifact set. Released in 1994, Antiquities pre-dates The Brothers' War novel by four years, but still features a good amount of lore (30 cards out of the 84 in the set, 35%, feature a mention of Urza or Mishra, and those that don't are just as likely to mention their apprentices, Tawnos and Ashnod, or their own teacher, Tocasia).

The set heavily features mainstays of The Brothers' War storyline, from the Mightstone to Mishra's Dragon Engine he tames with his own smaller half of the powerstone they found in a Thran digsite. Indeed, with the flavor text of Antiquities spelling out most of the setup of The Brothers' War, it seemed like a fine excuse to visit the set before we revisit the story later this year. Why bother with the good cards we already know, though? Let's look at the worst ones instead!

Like most sets from the antiquities of Magic design, Antiquities has more misses than hits. In fact, it could be argued that pretty much every "hit" from the set only has staying power because it was designed poorly in the first place. Even with only 84 total cards in the set, the majority of them see very little play. Still, there always have to be winners, so let's take a look at those before we move on to the bottom of the barrel.

Surprising no one, all of the top cards from the set are either blue or colorless, heavily featuring some of the most broken lands that have ever graced the game.

However, the real question is this: is that true of the worst cards in the set as well?

Criteria: Cards originally printed in Antiquities that are legal in the Commander format. As is tradition, all results are ordered by EDHREC score, only this time we'll be going by lowest scores!

Alright, let's not beat around the bush. Our most popular card out of our worst 10 is strictly outclassed by Filigree Familiar. Don't get me wrong, I love that little Fox, but that's not a great spot to be starting. Even in Pauper EDH, there are just better options than Onulet, even if you care about lifegain or death triggers. Still, you can see that it was the inspiration for Bottle Gnomes, both in the story and in design space, so we're still looking at a cool piece of history here!

Maybe the combination of nostalgia and history that Onulet brings to the table is increasing its numbers somewhat, then, because I take a look at Orcish Mechanics and see a card that definitely fits a niche. A free sacrifice outlet that can hit any target for two is nothing to scoff at, and could absolutely see play in a budget artifact deck.

As for Urza's Miter, it's probably not good for anything but the memes. But what memes!

There is no niche inside of a niche for either Argothian Pixies or Grapeshot Catapult, but they are notable for the fact that they can't destroy each other, despite totally seeming like they absolutely could. Not only would Argothian Pixies prevent the damage from the catapult, but apparently they also don't fly? That's a design choice, I guess.

One precursor (of many) to the Equipment subtype that appeared many years later, Ashnod's Battle Gear probably got the closest of any of them. It recognized that it would be too good of an offensive weapon if it was allowed to 'equip' opposing creatures, while also knowing that you would want to have the option to keep it on your own creature without having to pay more mana every turn.

Granted, none of those are reasons that you would want to play this card, so the low number of inclusions seems warranted.

As you might imagine, the cards only get worse as we go down the inclusion ladder. After all, why would you pay two mana to then have to pay two mana to probably kill your own creature, when you could instead pay four mana to then pay three mana to definitely not kill your opponents? Staff of Zegon is one of those time capsules that just shows exactly how bad things could be in a time period before Limited even existed to make an excuse for bad cards like this. Sure, maybe in set #1 they hadn't figured out yet that -X for power wasn't nearly as good as -X for toughness, but they still hadn't figured that out by set #3???

Another early attempt at Equipment, Tawnos's Weaponry isn't nearly as aggressive as Ashnod's Battle Gear, in either cost or effect. Four mana to give +1/+1 may seem about as bad as it can get, but we're barely scratching the surface here!

With that said, our #4 slot is actually fairly solid, all things considered! Golgothian Sylex is overcosted, to be sure, but a quick Scryfall search at the table will probably have you hitting something! More impressively, there is actual no-holds-barred potential with Reverse Polarity, as it doesn't have a rider saying that the damage must come from artifacts your opponents control. It has been heavily errataed to "you gain X life, where X is twice the damage dealt to you so far this turn by artifacts", but even with that wording there is potential to go a bit nuts with an artifact that deals a bunch of damage to you as part of its effect.

The only problem? There isn't an artifact as of yet that deals a bunch of damage to you all at once for a big effect. Maybe someday!

Unlike Reverse Polarity, however, Argivian Blacksmith has an honest-to-God actual niche that it fits in.

'Artifact creature tribal' is somewhat new as an established archetype, but is solidly becoming its own thing. While Argivian Blacksmith isn't blowing anyone away with its efficiency, it is above rate for prevention effects, and if you have some untap shenanigans in your Vehicle deck it could be a worthy inclusion to make combat a math headache for your opponents. Worth considering, at least enough to get it off of this list!

There's no saving Coral Helm. Even in obscure decks like Squee, Goblin Nabob looking to abuse rummage abilities, the effect is just not great enough to warrant losing cards. Short of something being printed that draws you a card every time you target a creature with an ability, there's probably no saving this one.

Which is why Coral Helm should be in our #1 slot, not Martyrs of Korlis! Sure, it's pricey at five mana, but it's a 1/6 that can prevent all sorts of damage to you from your own artifacts and your opponents! Heck, just imagining the look on an opponent's face as they read this card while trying to activate an Aetherflux Reservoir alone makes this worth the inclusion!

While there are plenty more lackluster Antiquities cards to go around, I think that our time would be better spent looking at a few of the relevant flavor texts in the lead-up to The Brothers' War: 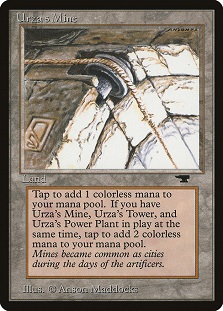 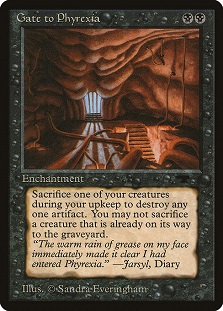 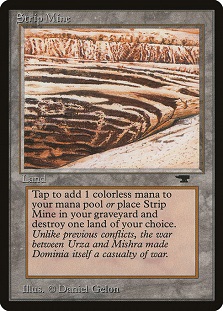 The flavor text on Urza's Mine does more for me to set the scene for The Brothers' War than any other card in the set. Listing off Urza, Mishra, Tawnos, Ashnod, Tocasia, Feldon, and the rest is one thing, but "mines becoming as common as cities" really spells out just the kind of industrial revolution that was taking place both in the lead up to and during The Brothers' War. Discovering Thran machines set off a powder keg of advancement and an immediate confluence of power for anyone that could gather even a modicum of understanding of how these machines worked. Add to that the discovery of a Gate to Phyrexia in the bowels of Koilos, and it's no wonder that the very landscape of Dominaria was affected.

I realize that I'm jumping a bit ahead in my excitement for The Brothers' War, but now more than ever I feel that you have to pick and choose which sets to pay attention to, lest we all be swept aside in a never-ending hype cycle. With that in mind:

Finally, what's your favorite old artifact from the days of yore? Is it allied with Mishra or Urza? What Thran secrets do you hope to still see brought up from the depths of a digsite?

Let us know in the comments, and we'll see you at the ancient altar pulled from the very bones of history we decided to use as a table because the robots were more interesting.