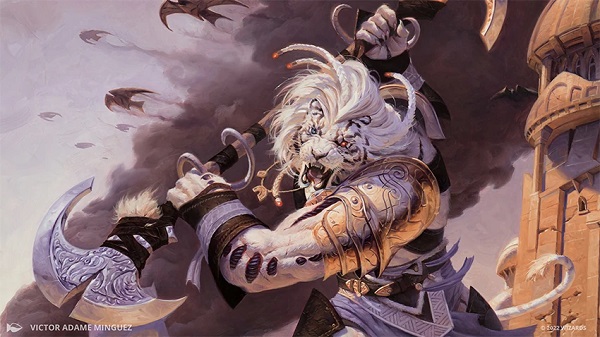 Welcome to Too-Specific Top 10, where if there isn’t a category to rank our pet card at the top of, we’ll just make one up! (Did you know that Tsabo Tavoc is the only card with protection from legends?)

In preparation for the Phyrexian invasion, Wizards did a massive errata earlier this year to update all canonically Phyrexian creatures with the creature type "Phyrexian". As such, it just became a lot easier to filter through and find out what creatures are Phyrexians and which ones aren't, so the first thing I did once stories started creeping out of Dominaria United was take a look at that list:

I was surprised to see that the list was extensive, coming in at 200 cards before Dominaria United even gets involved. Random unnamed monsters aside, we know that we're about to see the compleation of a ton of beloved legends we know on a first-name basis, and as such, I'd like to focus on the 31 legends we already know have seen the perfection of Phyrexia. Think of it as a means of checking our list as we search for Sleeper Agents.

Criteria: Phyrexian or compleated beings that are legendary. As is tradition, all results are ordered by EDHREC score, only in this case we are ranking by helmed decks (as none of the planeswalkers made the list anyhow).

The only legend ever printed to have natural first strike and deathtouch without having to work at it, Glissa, the Traitor is a force to be reckoned with in the red zone. Folks tend to build around her second ability, giving us a rare Golgari artifact deck! That's right, break out those Marionette Masters, Disciple of the Vaults, and Ravenous Squirrels!

When Volrath, the Shapestealer initially came out, it was heralded as the first non-Atraxa 'weird counter tribal' commander. In practice, most builds actually ended up being just more +1/+1 counter builds with more Infect and Proliferate thrown in to get maximum lopsided value. That's not to say that there aren't a ton of fun, unique builds of Volrath out there, but just be aware that if you're looking to stack up weird counters from throughout Magic's history, you might be better off with Perrie, the Pulverizer.

By contrast, a commander that did live up to their initial hype was definitely Greven, Predator Captain. If you haven't had the delight of playing against one of these brews yet, they're pure Rakdos delight. Paying life for cards, sacrificing creatures, smashing face with a huge guy with menace, what's not to like?

If you're looking to be a real-life menace, then Vorinclex, Monstrous Raider may be more up your lane. Guaranteed to illicit groans whenever it hits the table, Vorinclex can cozy up to planeswalkers, +1/+1 counters, or both, all while keeping a shocking number of your opponents' cards from working correctly.

To give you an idea, here's the Top 10 Cards Vorinclex Shuts Down (or at least hampers from your opponents):

It's not all fun and games, though. Beware of playing Vorinclex against cards with Cumulative Upkeep, like Mystic Remora, as it'll stop them from counting up (or make your own go up twice as fast)!

Speaking of cards that Vorinclex interacts well with, it's Ich-Tekik, Salvage Splicer! The only Phyrexian Partner on our list, Ich-Tekik is a monstrosity of Golem tribal value, no matter who you pair him up with. The most common variants tend to do a lot with artifacts.

For my money, though, the most fun variant of this card you can play is with Sakashima of a Thousand Faces to just get double the Golems and double the +1/+1 counters!

If you've never played against Belbe, Corrupted Observer, then you might not be aware of just how quickly this deck can stack up absolute loads of mana. One activation of any effect that makes each of your opponents lose 1 life, and you're sitting on six mana in your second main phase. Even better, with the amount of one-mana creatures that make each opponent lose one life on attack, you can often do this on the very turn that Belbe comes into play.

From there, it's all about finding expensive things to cast that will win you the game. Easy, peasy!

Experience counters are a hell of a drug, as evidenced not by just Ezuri, Claw of Progress, but also Meren of Clan Nel Toth and Mizzix of the Izmagnus. Having a static ability that continues to count upward even after your commander dies is a ton of value you accrue over a game. In the case of Ezuri, that value represents itself in a ton of +1/+1 counters every single combat step, making him the perfect commander for anything from small evasive creatures to Hydras. Throw in some rampant +1/+1 counter synergy in the Simic color identity, and it's not hard to see why this flexible commander is still popular, seven years on.

Brudiclad, Telchor Engineer was the initial rush of abusing creature copy effects in Commander, which is interesting, because based on my initial read of the card, that's not at all what I would assume a Brudiclad deck would be. It's not until you watch someone Twinflame an Academy Manufactor to then make their 15 Myr tokens into copies of it and create 4,000 Clues, Food, or Treasures that you realize just how ridiculous Brudiclad's effect truly is. People may think I'm operating in Magical Christmasland there, but any copy effect and token-generator in a Brudiclad deck is always on the cusp of going exponential. Don't believe me? Just take a look at the most-played token-generating creatures on Brudiclad's EDHREC page.

More than half of those are absolutely game-winning in multiples, even if you don't manage to keep Brudiclad on the board.

If you're looking for the truly busted stuff, then you're not here for tokens, you're looking to cast things for free or super-cheap so you can do all of those broken things much sooner. Enter K'rrik, Son of Yawgmoth. He may be a faker with a fake title, but he's more than willing to trade life for mana, and that's a bargain any black player will gladly make. Just don't count on his lifelink to get you far, because K'rrik has a habit of not staying in play very long.

Another day, another Top 10 list with Atraxa, Praetors' Voice at the top of it. The #1 top commander for years running now, Atraxa is still one of the most flexible and generically good commanders that has ever been printed. With a bevy of relevant keywords, a Proliferate trigger that synergizes with a quarter of the cards in the game, and access to four colors, there are always more reasons to play Atraxa than not.

First off, this list of mostly commanders did have two inclusions that didn't qualify under that heading:

If we'd done this list based solely off of inclusions in the 99, Kaldra Compleat would have come in at #10 on that list. Tamiyo, Compleated Sage would have been 19th, a poor showing for the first of what we initially assumed was going to be a long list of compleated planeswalkers. Alas, she remains one of the few examples we'll probably ever see of a compleated planeswalker, since it seems likely Teferi will go back in time to pull an X-Men: Days of Future Past, probably undoing all of the Praetors' hard work in the process (I hope to be wrong about this, and might be, given that there are at least three more Phyrexian sets after The Brothers' War).

Another distinct possibility of Teferi's upcoming time travel shenanigans is that we might also have some famous Phyrexians that will be retconned to never be compleated, which would be its own kind of interesting. With that in mind, I'll leave you off with the full list of current Phyrexian commanders, just to know who might become a real boy again in a hypothetically altered timeline:

I realize that I may be alone in being excited about beloved planeswalkers becoming oily horrific nightmares, especially if they do end up that way more permanently rather than being Death of Superman'd, as they almost surely will be. I just can't help it, though, the prospect excites me! What about you?

Finally, who is your favorite Phyrexian commander? Are you excited about possible new additions to the lineup, or more nervous about who's going to get hit next?

Let us know in the comments, and we'll see you at the table that somehow seems a lot spookier than the last time we played at it.