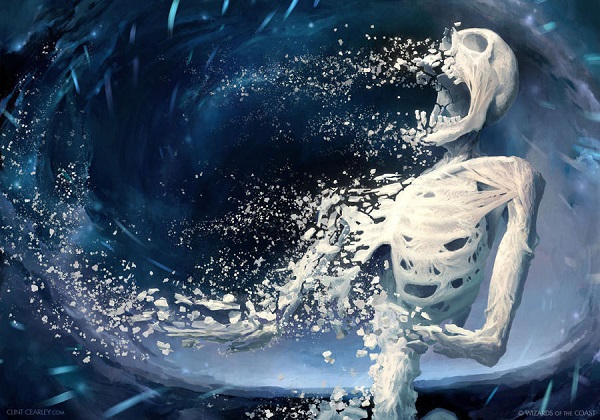 Welcome to Too-Specific Top 10, where if there isn’t a category to rank our pet card at the top of, we’ll just make one up! (Did you know that Archfiend of Depravity is the only card that makes each opponent sacrifice all but two of their creatures?)

Every day, more and more creatures are printed with the most dreaded and sought-after of keywords: indestructible. Making them nigh invincible, these creatures can wade into combat and Wrath of Gods alike with nary a scratch.

Only, is that such a big deal?

Top 10 Board Wipes That Get Around Indestructible

From bounce to sacrifice to shuffling to -X/-X, there are a multitude of ways to get rid of a whole board without having to worry about indestructible creatures being left behind.

Which got me wondering: what are the most popular board wipes that fit that bill?

Of all the board wipes that have been staples in the Commander format over the years, perhaps none have been more sought-after than the efficient examples that only cost four mana. Combine that with an opportunity to have it be a bit one-sided, and it's no surprise to see Whelming Wave make the list. Whether or not you're playing sea monsters, being able to tell the table to try again next turn at a reasonable cost is something that's always worth considering.

If you're looking for something a bit more permanent, however, then there's always Black Sun's Zenith. Even if you don't have enough mana on hand to wipe the entire board, it will make whatever's left smaller, which is nothing to scoff at. Neither is the possibility of being able to do it all again later after it gets shuffled into your library.

What's better than returning everyone's creatures to their hands? Returning everyone's creatures to their hands at instant speed! Evacuation has been a staple of the format since day one, and while it's not quite as popular these days as it used to be, I would urge everyone to take another look at it. If you've never cast a board wipe at instant speed, "useful" is an understatement.

Are you in a colorless deck? Want a way to deal with creatures in green, or enchantments in red or black? Look no further than All Is Dust. There's an absolute guarantee that it will break the bank, but when you need it, you need it.

Unlike most of the other options on this list, Winds of Abandon isn't actually primarily used as a board wipe, although it does have that functionality. You're far more likely to see it utilized as a bad Path to Exile simply because it has the option to be a one-sided board wipe. So why don't more people use that second option more often? Well, because when you do, you also put the entire opposing side of the table several turns ahead of you in mana. Heck of a price to pay.

5. Curse of the Swine

I've made no secret of my personal love for Curse of the Swine, attempting to squeeze an opportunity to misquote Willow into any play opportunity with it.

As far as benefits go, yelling "ALL OF YOU PIGS!" at the top of your lungs in an LGS is just the beginning. Curse of the Swine allows you to exile creatures in a color not usually able to do so, replacing them all with 2/2 Boars. While you'd gladly take that as a general board wipe, it also does so on a targeted basis, allowing you to just hit the most problematic creatures on the board with your limited mana.

Unless, of course, you don't have limited mana. Then you just get to cackle a little louder.

Speaking of one-sided benefits, Living Death! Okay, okay, it's not strictly one-sided, and lord knows we've all seen it go poorly for an overly excited black mage. However, if all does go according to plan, Living Death can return a cavalcade of problem creatures and enter-the-battlefield triggers, several of which will probably let you take out whatever everyone else got back in the deal anyhow. After all, if you're the black deck, and you don't have more creatures in your graveyard than everyone else, aren't you doing something wrong?

Aetherize is a bit more selective than your average board wipe, more closely resembling a Fog with a bit of Comeuppance. That said, as many have discovered this past year with Inkshield, there are few things more fun than taking someone's alpha strike and turning it into a complete disaster instead. While some might prefer Aetherspouts for that truly catastrophic feel, there're still lots of bad feelings to go around with Aetherize, and you'll be more likely to keep up four mana than five.

There was no way we were going to make it through this list without seeing the most popular exile board wipe in existence, Merciless Eviction. While several have been saying of late that it costs too much to keep on being at the top of all the Orzhov lists in existence, I'm not so sure. For the ultimate in flexibility and deadliness, six mana is a small price to pay.

If you were looking for the most efficient option out there when it comes to dealing with indestructible creatures, then you had to know where this list was going to end. Toxic Deluge can easily be one-sided, but even when it isn't, you're very rarely unhappy to only be paying three mana to wipe the board. That is, unless you're already so far gone that it wipes you out, too!

You'd have to go too far down the list to even do the math to find it, so as a result, with no shuffle cards making our Top 10, I have no choice but to sing the praises of one of my favorite cards, The Great Aurora. At first glance it looks like an overgrown Warp World, and well, that's kind of exactly what it is. It's anyone's guess what'll come out on the other side, but your problems will at least be different than before you cast it, and if you're in the token deck, then the likelihood that you'll be better off than the rest of the table is quite high.

As for the more run-of-the-mill runners-up, Flood of Tears would have been #11 on our list, even though it's #1 in my heart. I highly suggest it for any deck where you have a crucial engine or commander that's expensive, as wiping the whole board and then plopping down a Will Kenrith or Gyruda, Doom of Depths can be absolutely backbreaking. If you'd rather a board wipe that can leave you with a lone creature all on its own, however, then Massacre Girl more than fits the bill. I've only ever seen her not wipe an entire board once, despite everyone always wanting to count it up, and a 4/4 with menace will always be a threat on a mostly empty board.

Finally, if you're looking for a gift that keeps on giving, then look no further than Archfiend of Depravity. Not only is a 5/4 flier going to get through more often than not, the fact that it keeps on wiping the board with every rounding of the table makes it an absolute must-answer, even before you realize that it's also one-sided. Seriously, how did this card ever get printed?

A thing that went rather unexplored with our topic this week is whether indestructible is still the boogeyman that it used to be in the Commander format. Thus, I have a question for you.

Let us know in the comments, and we'll see you at the steel picnic table that someone somehow managed to bend!