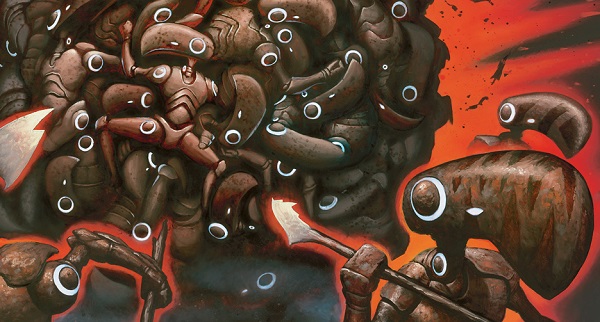 Welcome to Too-Specific Top 10, where if there isn’t a category to rank our pet card at the top of, we’ll just make one up! (Did you know that Hovermyr has the exact same power and toughness and casting cost of Omega Myr?)

I mentioned off-handedly last week that Myr Battlesphere was so good in Jetmir, Nexus of Revels that you could build a Myr tribal deck out of it.

Well, time to put my money where my mouth is, I guess.

Now, at first glance, this deck appears to be exactly what I intended: a bad Jetmir Myr Tribal build. But, as many of you are probably figuring out in your pods right now, there's no such thing as a bad Jetmir build. He is just too efficient a finisher, and any combination of creatures and Naya ramp will create a board that has to be answered immediately, at which point there are any number of expensive cards can just immediately recreate the problem with a horde of tokens, with Myr Battlesphere chief among them. 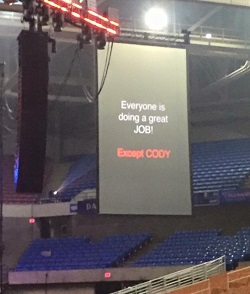 Why don't we just ignore that guy?

Criteria: Cards that either are Myr or create Myr tokens that are not named "Myr Battlesphere". As is tradition, all results are ordered by EDHREC score.

Is this an arbitrary way to take a pretty simple top ten criteria and make it "more complex" by specifically weeding out a card everyone knows would be at the top of said list? Absolutely. Does it make more room for us to talk about some much less loved Myr? Absolutely. So let's get to it.

There's no doubt that Infect is a controversial subject in the Commander world, but outside of Triumph of the Hordes and Blightsteel Colossus, I've never really understood that particular boogeyman. The vast majority of Infect creatures are exactly like Ichorclaw Myr: poorly costed, tiny, with mostly irrelevant gimmicks. An Infect player rarely kills more than one player, at any power level, at which point they're inevitably killed themselves for being scary.

It's just not good enough a strategy to even be controversial, much less be a boogeyman.

You know what is scary, in a non-controversial fashion? A Brudiclad, Telchor Engineer deck that's gotten online and is about to start making infinite copies of Combat Celebrant. When Brudiclad was first printed, there were a lot of hoops to jump through to make interesting tokens, as opposed to just 2/1 Myr or 3/3 Golems. Not so anymore. With the newfound prevalence of permanent copy tokens, it's now trivially easy to copy your two-mana Junk Winder so you can make all of your tokens 5/6 just in time for a new token that then taps down the whole board.

If you're looking to flood the board in a more traditional fashion, however, then look no further than Genesis Chamber. Oft maligned for being symmetrical, Genesis Chamber is anything but in a deck designed around it. Sure, that other player will get a 1/1 when they play their Eternal Witness. You're going to get one when you play your Elvish Visionary, your Wall of Blossoms, your Ice-Fang Coatl, your Coiling Oracle....

If instead you'd rather go tall than wide, then there's always Brass Squire. As a 1/3 for three, it's not exactly blowing anyone away with its base stats, but attach an Argentum Armor to it for free and you're certainly getting your money's worth. In fact, let's just take a look at some of the most used Equipment that Brass Squire gets you a discount on:

Top 10 Equipment That Equips for More Than Three

...and that's just looking at how much you're saving on the first activation, not to mention the ones that follow!

If you've got a hankering for Infect shenanigans, but also need some ramp in your life, then Plague Myr has you covered! It's not the most efficient in either arena, but when it can do both at once, who cares?

The thing I love about Mirrodin Besieged is that it can either be a bad Bitterblossom or an immediate win condition. Unlike other conditional win cons, like Revel in Riches or Helix Pinnacle, it's not sitting there scaring the entire table if you play it down early to get some bodies, but you can also play it down late and just win the game! While I've gone into some detail about the feel-bads that can result from that sort of thing, games do have to end, and it's not like people don't have a chance to remove it.

The original Myr that started it all, this cycle of mana Myr is about as simple as they come. For two colorless, you get a cute little robot that will make you mana of a given color. At the top of the list is Iron Myr, Silver Myr, and Gold Myr, all simultaneously in colors that like artifacts and don't have rampant ramp spells in their colors. At the bottom is Leaden Myr and Copper Myr, in colors where ramp is much more prevalent and artifact decks are much less prominent.

Shimmer Myr is, at its heart, a discount. By and large, if you're looking to cast things at instant speed, you're going to pay four mana for that effect. Whether it's Vedalken Orrery, Leyline of Anticipation, Raff Capashen, Ship's Mage, or Yeva, Nature's Herald, four just appears to be the going rate. Even against the exceptions like Vivien, Champion of the Wilds or Teferi, Time Raveler, Shimmer Myr still blows the competition out of the water by having flash itself!

In other words, as popular as Shimmer Myr is at 21,000 inclusions, I honestly think it should see even more play. Preferably at your opponent's end step.

Seeing Palladium Myr near the very top of this list was a huge surprise for me. Don't get me wrong, I'm as much of a fan of Worn Powerstone as the next player, but putting it on a creature makes it a lot more vulnerable, and while I'm sure there're some decks that focus specifically on creature ramp because they also want to swing with said creatures, and some decks that focus on untapping creatures specifically, even those strategies put together probably don't equal 23,000 decks. So is this more Precon bias from its inclusion in the Daretti, Scrap Savant deck in 2014, or am I missing something about this shiny Myr-guy?

The King is dead, long live the King. Even with Myr Battlesphere out of the picture, it wasn't too hard to figure out which Myr would reign supreme. A mere 3,000 inclusions behind the big bad sphere itself, Myr Retriever is the most efficiently costed of all the small Aristocrat artifacts. At two mana for a 1/1 that gets you an artifact back to your hand when it dies, it beats out Junk Diver, Workshop Assistant, and Scrap Trawler all. In other words, if you're looking to be moving your toys from one pile to another all game long, you'll need the master, and there's only one.

You'll notice that despite our criteria including cards that make Myr as opposed to just Myr themselves, there weren't many of them on our list. With that in mind, then, I'd be remiss if I didn't give a more all-inclusive look at the options for making Myr tokens:

A decent list, and yet I can't help feeling like it's not from a nearly big enough pool. At 38 Myr total, and 15 Myr token-creators, the tribe remains woefully underrepresented even after visiting Mirrodin six different times throughout Magic's history, so here's hoping we see some Myr on the front lines when the next Phyrexian invasion does finally come!

For once, I am without a hot take or controversy to throw at my readers as red meat for a poll. So instead...

Finally, what is your favorite Myr? What decks have you managed to squeeze them into? Are there any radical, out-there Myr tribal builds you've managed to concoct in the absence of a true Myr commander?

Let us know in the comments, and we'll see you at that table they do the robot soccer competitions on. In between rounds, of course.