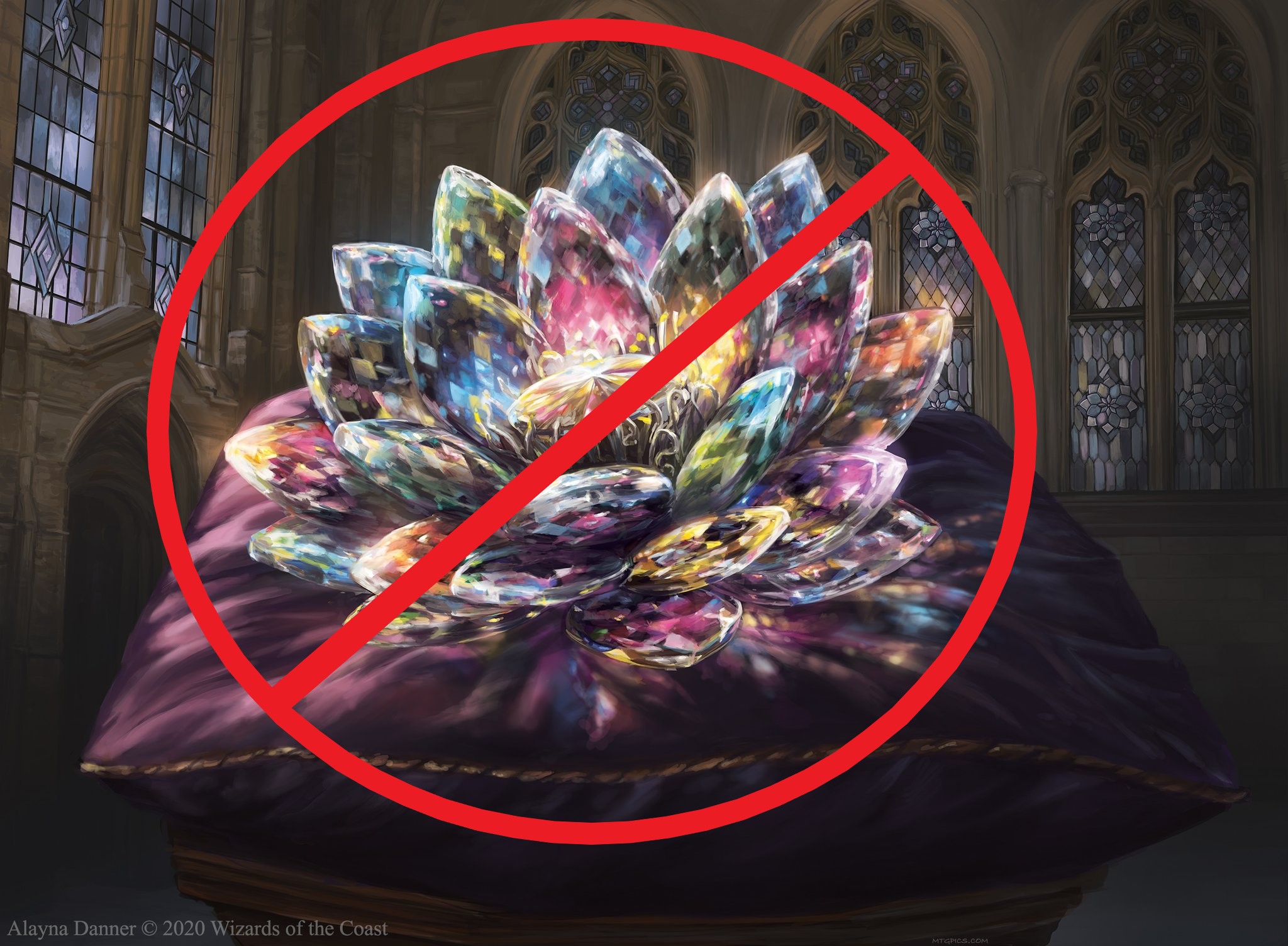 No, the One Before That

Welcome to Too-Specific Top 10, where if there isn’t a category to rank our pet card at the top of, we’ll just make one up! (Did you know that Brash Taunter was the only red indestructible creature printed in 2020 that wasn't a God?)

2021 is over and so it's time for our yearly look back. Long-time readers will know, however, that this yearly look back has to go a bit further back, as we still don't have good data on the latter half of the year:

Not a single Adventures in the Forgotten Realms, Midnight Hunt, or Crimson Vow card. To find one, you have to go down to number 41 in the search results to have Treasure Vault grace you with its presence.

So, with that preview for next year's 'Last Year's Top Ten', let's instead look further back and move on to 2020!

There they are! A depressing sight if I've ever seen it, worthy of 2020. Cards that never should have been printed, existing despite it all, in back-to-back-to-back sets. 2020 probably did more damage to the Commander format than any year prior when it comes to powerful, expensive, "must-play" staples that just cement themselves in a deck slot, never to be moved (until they're once again moved via a printing of another chase card). The end result? Decks all the same, and an average per-card cost of $24.98 pricing out more and more players every day. It's depressing, and I don't want to think about it.

So let's instead do what every non-optimizing-at-all-costs brewer has done since these cards were printed: ignore them and look at the stuff that doesn't cost an arm and a leg!

First, a refresher on the less depressing side of the sets of 2020:

Alright, with that out of the way, let's take a look at the best of the reasonably-priced cards for 2020!

Criteria: Cards physically printed in the calendar year 2020 for the first time that currently cost less than $5. As is tradition, all results are ordered by EDHREC score.

Wheel of Misfortune feels like exactly what the format needs: a "reprint" that takes an obnoxiously expensive staple and puts a different spin on it - one that's still plenty playable but also almost exclusively worse. Still, while I'm sure that there are folks lamenting the fact that this isn't Wheel of Fortune, overall the reviews on Wheel of Misfortune have been celebratory, both as a cheap alternative to the $300 Reserve List staple, and as a fun take on the often miserable mechanic of wheeling.

Thankfully, as a bit of a preview for next year's look-back, this design philosophy is massively expanded upon in 2021. While there is still a lot of strictly better, grossly powerful things going on, overall the idea of "niche playable, not must-play staple" has caught hold, and it's very possible that Wheel of Misfortune was the beginning of Wizards seeing why that might be a more healthy approach overall.

Despite knowing that Enchantress has always struggled to have real win conditions, I was still surprised to see Destiny Spinner here on the list. After all, it's not like we've ever seen a run on Eutropia the Twice-Favored or Hadana's Climb, both of which probably do a better job of finishing things out. Then again, it's hard to ignore that both of those cards are Simic, a color combination you're less likely to play than green on its own or in a different color combo. Not to mention the fact that Destiny Spinner costs just two mana, making it lower to the ground and easier to trigger Enchantresses. Combine all that with a moratorium on Counterspells, and I suppose it's not hard to see why this became an instant staple of the strategy.

Zendikar Rising's take on the Modal Dual Facing Cards (MDFCs) has proved to have real staying power, and it's not exactly a surprise. Being able to have both a land and a spell in the same slot in a deck is a game-changer, with some brewers being such a fan that they don't even really care what the "free" spell does. Malakir Rebirth doesn't struggle with being relevant in the Commander format; when everyone has a crucial creature in the command zone, a spell that can save you from having to recast it is something that just about everyone is interested in.

Blood Artist has been the primary Aristocrats finisher since the birth of the format. The only problem? It dies pretty easily. So why not slap the effect on an enchantment for an extra mana and throw in a token, too?

Lands Matter and tokens are two of the most popular strategies in EDH, and Scute Swarm does them both more efficiently than just about any other option out there. For three mana, you can get a token per turn in the early game at a minimum, and as soon as you start building up a serious land count, things go exponential. The only thing that's surprising about this one making the list is that it's still under $5.

In a moment of hope, I thought serious change in the hype around Boros had caused Spectator Seating to be the most popular of the new enemy colored bond lands, but that's just my naiveté speaking. In fact, Spectator Seating is the least popular, and therefore least expensive:

So, much as the hype from Lorehold college has helped the beleaguered color combination, at least for now, it would appear that it is still the least popular guild to play... or is it?

With a minor lead on Selesnya, a big lead on Gruul, and barely hanging behind Azorius, Boros continues to climb the ranks of popularity. How much of that is hipsters like me playing it because it's "the worst", I'll leave up to your imagination.

I went out of my way to avoid ranting too much on the subject of rare and mythic staples outdoing older cards to the point where only the new $30 hotness was an option, but it really does make me worry for the future of the format. Me liking Village Rites despite it being a strictly better version of Altar's Reap while also outpacing Deadly Dispute, Costly Plunder, Bankrupt in Blood, Blood Divination, Merciless Resolve, and Skulltap made me feel a tiny bit hypocritical at first. Why do we celebrate this effect getting power-creeped at common, while we gnash our teeth at the new 2/1 for one with upside printed at mythic?

For me, at least, the answer has everything to do with the price tag. More and more, Commander is becoming a format where the point of entry is, like, $400. Battlecruiser is dying, and the reign of $20 comes-into-play-untapped duals and $30 "must-play" staples seems to be just beginning. The days of being able to slap together a deck out of cards you had lying around or picking up a precon and sitting down at the table seem further and further away all the time... until I see Village Rites. Staples at common are a gift to the format as a whole, allowing budget decks to keep up while being easily obtainable for new players. While them being strictly better is still a bit worrying, their contribution is more than worth it.

While it's not the 2018 standout known as Beast Whisperer, Garruk's Uprising has several upsides over it: it's an enchantment, and therefore not as vulnerable; it's cheaper, at three mana; it triggers on creatures entering the battlefield instead of being cast; and if you have the big creature, it draws you a card immediately, replacing itself. Oh, and there's this extra little line in there that gives all your creatures trample, but I'm not sure who would ever have an interest in that!

In short, Garruk's Uprising is exactly what we saw some of in 2020, and a lot more of in 2021: a great card in its specific niche. Hopefully that trend continues forward and we'll see a lot more like it gracing Top 10s in the future!

If you're looking for an all-around, just generally great card, then you could do worse than using Bala Ged Recovery as the template. The poster child of the MDFCs, Bala Ged Recovery is a slightly more expensive Regrowth. For the extra mana you're paying, you get the option to instead just flip it around and use it as a land instead. It's a tiny thing, but it makes all the difference in the world, both in brewing and playing.

The #1 spot goes not to a flexible, cheap staple, but rather to a color pie shift. For the entire history of the game, black could do nothing about enchantments, in a similar fashion to red. Even the slightly more dubious "player sacrifices a permanent" abilities were tamped down a bit over time to ensure that this rule of the color pie wasn't broken. Now, with the printing of Mire in Misery, Pharika's Libation, and Feed the Swarm, Wizards has eased into the idea that black can dabble in enchantment removal, even if it's still going to be the fourth worst color at dealing with them. It doesn't look like the stretch is going away, either, as Baleful Beholder was also printed in 2021, specifically having creatures sacrifice enchantments with its flavorful Antimagic Cone ability.

No matter how you may personally feel about black's newfound ability to deal with enchantments, there's no question that Feed the Swarm is a great removal spell.

One of the most exciting things each year as we delve further and further into Commander being the premiere format of the game is the list of new commanders we're seeing more and more of. 2020 was no exception, more than doubling the number of new commanders from 2019, from 78 to 186 (194 if you're into the whole silver-bordered thing). Let's go ahead and more than double our Top 10 commanders list as well, shall we?

There are so many commanders on this list I had already forgotten, not to mention the more hipster options that didn't make the list. I was rather sad to push the #26 pairing off, however. We could all use a bit more silliness like Sakashima of a Thousand Faces and Krark, the Thumbless. Sure, it takes up a lot of time, but there's so much fun to be had while you're doing it!

2020 was widely marketed as the "Year of Commander", although that definitely feels like it has been more "the start of everything being Commander, all the time" with post-2021 eyes. With that said...

Let us know in the comments, and we'll see you at the table in the corner looking up surprised from their game of Commander when everyone starts counting down. Lost track of time there, didn't we?