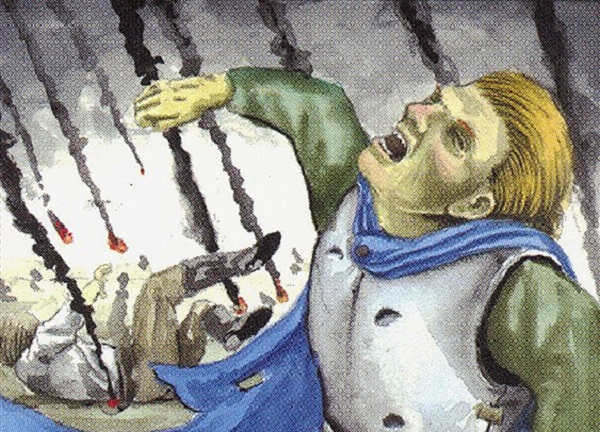 Welcome to Too-Specific Top 10, where if there isn’t a category to rank our pet card at the top of, we’ll just make one up! (Did you know that Volcanic Offering is the only spell that allows both you and an opponent to destroy a target nonbasic land?)

Keen-eyed readers that have looked at my bio will know that my very first EDH deck was Gruul land destruction because it reminded me of taking second in a Junior Super Series as a kid with more of the same, and because I had no idea what the Commander format was about. Fast forward more than ten years, however, and land destruction is coming back in popularity, though probably not at the levels that my Wort, the Raidmother build was going for, though:

If that looks like a random 101-card pile of land destruction cards mixed in with what a semi-competitive player who'd been out of the game for three or four years would think were green and red's best spells, that's because it is. That said, copying land destruction spells multiple times was almost enough to keep up with a multiplayer table until they inevitably ganged up on you for being an LD player, and Tangle Wire and Smokestack are completely unfair cards, so I did win a fair share of games before tearing the thing apart.

The point of showing this list, however, was not to illustrate how wrong I was about what EDH was when a friend excitedly explained to me about a fun new casual format that felt like kitchen table Magic all over again. Rather, the point was to say that some of the above land destruction spells are actually beginning to see play again, in much more limited amounts. The reason? Because lands are a problem.

Not your everyday basic lands, or even your duals, mind you. No, the lands that are a problem are the utility lands that can single-handedly turn a game in your favor, or the ultra-efficient mana lands that can double your mana with a single land drop. Which brings us to...

First off, I'd like to state that we're not talking about mass land destruction here. The old "Mass Land Destruction counters Ramp" argument came up again this week, and as much as I have strong feelings about that subject (MLD only helps ramp decks), I'd rather avoid rehashing the same old territory. With that in mind, we'll be doing our best to craft our criteria this week to talk about land destruction cards that go after individual lands.

Which brings us to the elephant in the room I can just hear people yelling at their monitors about:

The go-to when it comes to taking care of problem lands, for a long time now, has been Strip Mine variants. And while I'm not here to say that those options aren't still excellent, I will say that they're starting to not be enough. With how good utility lands are, space to throw in a few "free" lands that don't make your colors is getting sparse, and as a result more flexible options are creeping into decklists.

For those trying to avoid pricey and popular staples, however, the options can get a bit harder to come by. So, with that in mind, let's take a look at this week's list and see if we can't come up with some more hipster inclusions that might toe the line a bit when it comes to the social contract.

Criteria: Nonland cards which can destroy a specific number of target lands, specifically, without being more or less specific. In other words, no "destroy all lands" or "destroy target permanent" or "destroy target island". As is tradition, all results are ordered by EDHREC score.

Far from being a hipster alternative to Chaos Warp, Molten Rain is a pure land destruction spell with no flexibility whatsoever.

It shouldn't really come as a surprise, then, that almost half of its total inclusions come from obvious LD commanders like Zo-Zu the Punisher and Numot, the Devastator. Also, can we talk about how there's a Jeskai LD commander? That seems weird on just about every level.

Step aside, Aftershock, there's a Rakdos option in town that actually cares about the color pie! Only, it's... less flexible?

Assuming that the three life isn't the deal-breaker here, the greater popularity of Wrecking Ball despite it being two-color and unable to destroy artifacts, can probably be chocked up to general knowledge and availability. Aftershock never received a paper reprint after its initial appearance in Tempest, whereas Wrecking Ball has appeared in Dissension, Commander 2011, and Modern Masters 2015. Or maybe it being an instant is just that worth it to people, despite the four-mana cost.

Speaking of flexible sorceries, Rain of Thorns. While it still lags behind the old staple Desert Twister by under a hundred copies, there is something to be said for destroying three targets, even at six mana. While we're still not seeing impressive numbers out of our number eight contender, I wouldn't actually be surprised to see this show up in a few more casual builds as it continues to be reprinted in Commander sets. After all, folks love Harmonize, so there's got to be something to this three-for-one idea, right?

The original flexible LD spell, Pillage has been the plague of just about every Standard environment it's ever been part of. The option to race out a few threats and then disrupt your opponents' mana in the early game has been a favorite of aggro decks for a decade now, and the extra option to destroy a problem artifact in the mid- or late-game was just gravy. The same is true in EDH despite aggro not being a huge archetype, and the three-mana pricetag is still extremely efficient, provided you can afford the slot for a Shatter-Stone Rain hybrid.

Here's a question for you: why would you just destroy lands when you can destroy someone else's lands and go get more of your own? Frenzied Tilling might have done it first, but Reap and Sow is less color-intensive and allows for a cheaper casting cost if you only need one half of the card at the moment. All in all, it's no surprise that this option is creeping up the ranks of Lands Matter decks. Also, in case you skimmed the card... yes, it does go get any land. That might be pricey at four mana compared to Crop Rotation, but that in no way means that it's not a great option... with another great option stapled to it.

Is @EDHRECast or @jevin_mtg accepting submissions for Challenge the Stats? Because do I have a submission right here! Volcanic Offering only seeing play in 1% of red decks is absolutely criminal. Sure, it's five mana, but it's an instant that will destroy four permanents on the board. I personally play it in three different decks, and am absolutely never unhappy to see it in any of them. I think people are just frightened of giving choices to another player, but I've honestly never encountered a situation where I couldn't find a player who had some allied interests. Aside from hypothetical salty people saltily deciding to kill a Solemn Simulacrum and a Forest, though, there's really no downside here. Try this card out, you won't regret it.

Alternatively, I've never liked Incendiary Command much. I'll be the first to tell folks that hate Massacre Wurm that that's why they should be playing Pyroclasm, but the other options on here aren't great for anything outside of a Wheel deck. Which, to be fair, does account for about half of Incendiary Command's inclusions. The other half, however, seems to be still operating under the illusion that Incendiary Command is a red staple, and I'm just not sure that that's at all accurate anymore.

Whether it's a good option or not, however, I will never not love Star of Extinction. This card screams out to my inner Timmy in every way possible, while also dripping with flavor. I even broke my "only board wipes that also hurt players" rule to include it in my Group Slug Tajic, Legion's Edge build, on the off chance that I get to dome someone for twenty with a Mogg Maniac.

If you're looking to actually use this for a good strategic reason, however, then you might look into Firesong and Sunspeaker. Or at least be expecting it when they get to eight mana.

If you were wondering if we were going to see a non-red option again, it has arrived! Casualties of War gathered a fair amount of hype upon its printing in War of the Spark, despite being on the heels of the kind of disappointing Windgrace's Judgment. It has now surpassed the five-mana version that only lets you target a permanent a player by more than a thousand inclusions, however. Which is a surprise, given its sorcery speed and unwieldy mana cost. That said, destroying the biggest problem of each card type on the table with absolutely no restrictions is pretty huge!

That "no restrictions" bit I said about Casualties of War may not apply to Decimate, but you can usually scrape enough targets together to make Decimate... well, decimating! Combine that with the much more manageable mana cost, and it's no surprise to see this Gruul staple coming out on top. From the earliest days of EDH, Decimate has been turning tables in your favor with a single card, and will most likely continue to do so for a long time coming.

I'm sure that there are those among you who didn't like the removal of other Land Destruction options from contention, and to be honest I didn't think it was the most streamlined decision, either. So with that in mind...

There always seems to be a bit of interest in how these lists are made (this seems like a good time to stress once again that they are based on EDHREC score, NOT my personal opinion...), and people are often surprised that I'm not using any special data or .json from EDHREC, but rather just muddling my way through with some Scryfall knowledge! For your enjoyment/research, here is this week's Scryfall search.

And finally, do you play any single target land destruction spells? If so, what are they? If not, why not?

Let us know in the comments, and we'll see you at the table with the broken leg we haven't managed to fix since Steve kicked it. Pfft. Steve.