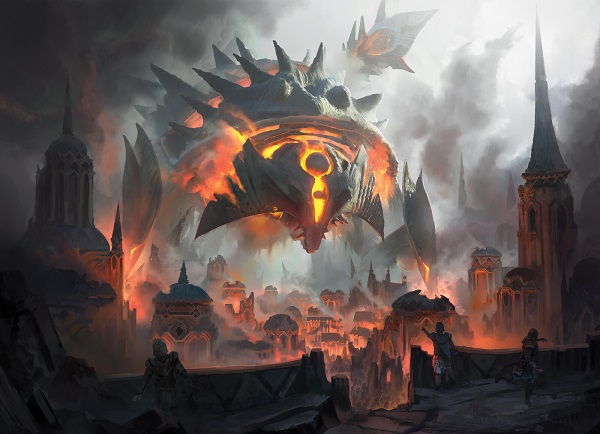 Welcome to Too-Specific Top 10, where if there isn’t a category to rank our pet card at the top of, we’ll just make one up! (Did you know that Bladegriff Prototype is the only colorless creature to destroy a nonland permanent when it deals combat damage?)

Another set, another Meteor Golem variant. The recent printing of Cityscape Leveler got me wondering: just how many of those do we have now?

For years, it's been well-known that red and black could not remove enchantments.

However, the color pie is a fickle thing. Red still can't get rid of enchantments, except for that one card that can, but it can extort others into sacrificing them with effects like Enchanter's Bane. Black now can destroy enchantments, and has been getting more effects with each set to do just that.

That said, thile both colors have struggled with enchantment removal and sometimes with artifact removal, there's ironically been an option available to both of them all along: removal effects found on colorless permanent.

Make it more expensive, and colorless cards are happy to take care of anything you need, color pie be damned. Thing is, we're getting further and further from the days where Meteor Golem is the only option for impartial removal, which of course means there's room for a Top Ten!

Criteria: Colorless cards that have the ability to destroy, exile, shuffle, or otherwise eliminate a target permanent or nonland permanent. As is tradition, all results are ordered by EDHREC score.

Lessons feel like one of the grand misses of Magic design. They don't work in Commander, they were by and large priced too high for any other format, and they felt too clunky and rare to build around in Strixhaven Limited. In short, it's a type line that no one really cares about.

Introduction to Annihilation, however, manages to be the cheapest colorless permanent removal out there. Sure, your opponent gets to draw a card as a consolation prize, but that's a somewhat similar deal to Chaos Warp, and you don't see people shying away from playing that card. Of course, five mana and sorcery speed is a lot worse than three mana and instant speed, so this will never be a Chaos Warp. There are quite a few people treating it as Chaos Warp number two, though, and I don't feel like that's the craziest idea out there.

Seven mana is much more common as the going rate for removal on colorless permanents, and Karn Liberated fits that Meteor Golem mold. As a planeswalker, he's able to repeatedly exile, even if two straight activations would decrease his loyalty to zero. With that +4 ability, though, Karn can easily stay alive even through minor attacks to keep on exiling things over the long term, which is really the reason for his 10,000 inclusions in EDH decks.

Why pay five mana for sorcery-speed removal when you can pay seven for an instant? Well, okay, that question does seem to answer itself, but still, there are quite a few folks who haven't caught on to the new options yet and are sticking with Scour from Existence. I personally think that's more momentum than proper card evaluation, given that Scour has been around since Battle for Zendikar, but I'm happy to field people's reasons for caring this much about instant speed when it forces you to leave seven mana untapped.

Another seven-mana removal option that can be used at instant speed, Unstable Obelisk also moonlights as a mana rock while you get up to that insane amount of mana. It's no Worn Powerstone if your colorless deck is trying to ramp out as soon as possible, but it does get you an extra mana early and some removal late, which is nothing to sneer at. Throw in a little artifact recursion and you could annihilate a lot of stuff, even if it costs you Eldrazi levels of mana to do it.

Part Meteor Golem, part Phoenix, I've always thought Spine of Ish Sah should be the premiere colorless removal option over Meteor Golem if your deck doesn't care about blinking creatures or Reanimate effects. If your artifact deck has any version of a sacrifice outlet, this one comes right back! Sure, that's still asking you to pay seven mana per turn to remove something, and there are tons of other effects out there that don't require such a heavy mana investment, but it's not the worst gameplan I've ever heard, and that self-recursion is pretty unique to this form of colorless removal.

If you're willing to pay six mana twice, then Argentum Armor can remove the biggest problem on the board every turn! Of course, that means you're paying twelve mana before you get to remove anything, but +6/+6 is a nice consolation prize for that effect, not to mention you can get around the equip costs in just about any Equipment deck.

It may not be the boogeyman of the format that it once was, but Argentum Armor is still a solid option to create the scariest threat on the board, whether it be because your deck has more mana than it knows what to do with or because you're paying zero to equip things at instant speed.

If you're drowning in mana and want a threat that terrifies the table before it even enters the battlefield, then Ulamog, the Ceaseless Hunger is right for you. Ten mana to exile two permanents is a heck of a bulk discount, especially as a cast trigger that can't be countered by normal means. Throw in a 10/10 body that exiles twenty cards from a player's library on each attack, and you'll wonder why anyone still plays Argentum Armor.

Of course, even in the early days of EDH when Argentum Armor was a big mana staple, there was a scarier Eldrazi-type threat out there: Ulamog, the Infinite Gyre. Indestructible, destroying a permanent on cast, and forcing another poor player to sacrifice four more things, Ulamog has always felt like the most bang for your buck for an Eldrazi. Throw in the fact that even if you never cast it, OG Ulamog will more or less make you immune to mill, and it's not hard to see why this has always been the premiere titan.

Except, I'm surprised to report, it isn't anymore! Kozilek, Butcher of Truth has actually usurped Ulamog, with more players preferring to draw four than destroy a permanent. Which is hard to argue with, I suppose. After all, removal is removal, but four cards could be anything! It could even be removal!

Not strictly able to remove any permanent, but in most cases, Ugin, the Ineffable will remove any nonland, nonartifact card, which is still nothing to scoff at for six mana. Combine that with the Spirit Dragon planeswalker's two-mana discount on all your colorless cards, and it's quite the package.

All of the prior candidates still don't hold a candle to the almost 50,000 inclusions of the OG, Meteor Golem. While I'm not sure that Meteor Golem should still be at the top of the pile, I do still like it as an inclusion in the following:

Unfortunately, outside of those very specific (and not that popular) decks, I don't really feel like Meteor Golem is still warranted as the top dog. Anything in green or white has better options for getting rid of pretty much every permanent type, and artifact decks have the rest of this list to choose from, almost all of which are better options that lean into a niche deck's strengths. That more or less leaves decks that care about repeatedly utilizing creatures with enter-the-battlefield abilities that don't have access to green or white, which is not a long list. Otherwise, you're probably better served with colored options or grabbing something like Introduction to Annihilation or Ugin, the Ineffable.

There are a few options that didn't come up that would've technically met our criteria, which are an interesting corner case:

All three of these "get rid of your own permanent" artifacts were lurking just outside of our Top Ten, with Tel-Jilad Stylus leading the way on the back of Grenzo, Dungeon Warden. Despotic Scepter has a much less straightforward use case, but it does see some play in Gift decks that may occasionally need to remove their own problem permanents. Strangely, the card with the most straightforward use case, Synod Sanctum, is by far the least used, with only 1,072 inclusions.

As for the rest, there are a couple other cards that didn't make our Top Ten that deserve a mention (and probably a slot in the actual Top Ten, if it weren't for other cards being more well-known).

While Bladegriff Prototype and Clay Golem currently see more play, I think the best of these extra options is Canoptek Tomb Sentinel. Four mana for a 4/3 with vigilance isn't anything to write home about, but a lot of folks miss that this card doesn't care whether it enters the battlefield via its expensive Unearth ability or not. In other words, you're a Goblin Welder away from repeatedly abusing this enters-the-battlefield trigger. It's easier to cast than most of the other options and it has backup Unearth if necessary. All of that put together gives you a much more versatile option that I think warrants inclusion in the burgeoning archetype of artifact creature decks.

As for Bladegriff Prototype and Clay Golem, they have niches of their own. Clay Golem is great for dice-rolling decks, for instance. I don't think Bladegriff Prototype's combat damage trigger is better than the multitudinous enter-the-battlefield effects we already have, but in flying theme decks, this can keep you ahead of your enemies. I've always liked Soltari Visionary effects, and Bladegriff Prototype fits that same mold. I highly suggest it for red, blue, and black builds trying to fly over the top for the win, though that's probably not a large niche.

As longtime readers will know, I'm a budget brew fiend, so I totally get why people will want to keep Meteor Golem in their lives over more expensive options. With that said, we're getting more and more options all the time that also cost a quarter, and which can do a reasonable (or even better!) version of that effect, too. So...

Finally, what's your favorite colorless form of removal? Is it still Meteor Golem, or have newer options pushed it out of your decks? Let us know in the comments, and we'll see you at the bare wooden table that's been eyeing those standard white folding tables rather aggressively.