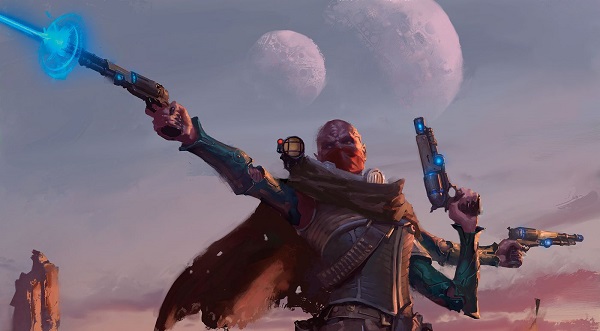 Welcome to Too-Specific Top 10, where if there isn’t a category to rank our pet card at the top of, we’ll just make one up! (Did you know that Death Spark is the only burn spell that checks what's above it in the graveyard?)

As long-time readers will know, I've always loved pingers. One of my oldest Commander decks is Samut, Voice of Dissent pingers, my favorite combo is Goblin Sharpshooter and Splinter Twin, and I've been trying to break Seismic Assault and Arc-Slogger since both cards were first printed.

Which is why, as I perused through the Tyranid Warhammer: 40,000 precon, I jumped for joy, just a little bit.

Not one, but two pinger commanders? Both of which don't care if the source is even a creature? Let's go!

I know, I know, what about blue? Well, let's answer that question real quick:

Now, I love Psionic Blast as much as the next person - quite possibly more - but when it's competing for space with Pirate Ship, it's fairly safe to say we're not dealing with the cream of the crop.

Besides, we've opened the door beyond Tims, so why not make some room? Speaking of which, what exactly do we mean by "Ping Effects"?

Criteria: Red cards that directly deal exactly 1 damage. As is tradition, all results are ordered by EDHREC score.

Hang on, I'm seeing a bit of a theme here: a ton of triggered abilities that ping for one when something happens, most often when a spell is cast.

Which gets me thinking, how great would it be if we could double up on our The Red Terror and Ghyrson Starn, Kelermorph triggers? Get an Electrostatic Field in play, and then cast a spell that deals exactly one damage?

All right, so now we're a spell-slinging burn deck, apparently. What exactly are we filling the chamber with, though?

Criteria: Non-"X" red instants or sorceries that cost three mana or less that either directly deal exactly one damage to one or more players or permanents you don't control, or divides damage among multiple targets. As is tradition, all results are ordered by EDHREC score.

Why the "you don't control" rider? Well, essentially because Rile exists. Let's get to the list!

What's better than dealing one damage to all of your opponents' creatures? Dealing three damage to all of your opponents' creatures! Electrickery sees some play at higher levels as a means to take out hordes of mana dorks and Hatebears, but overall is just not anything that anyone's been writing home about. Unfortunately, as we'll see further down this list, that's probably not going to change just because Ghyrson was printed.

Mana Clash, on the other hand, looks like the most fun you could possibly have with Ghyrson. If you're wondering, yes, it does work, with Mana Clash dealing hordes of instances of one damage all at once and getting a trigger from Ghyrson for each of them.

Only, if you read both cards closely, you will notice both that Mana Clash deals damage to you in addition to your opponent, and that Ghyrson deals a guaranteed additional two no matter the target. That's all well and good in a two-person match where you're just going to bring down your and an opponent's life total, but in a four-person pod, you've now lowered you and a single opponent's life total while the other two members of the pod are completely unaffected.

In other words, outside of some heavy Krark's Thumb impact, I wouldn't suggest rolling these particular dice.

The root of the Electrickery versus Blazing Volley discussion is a speed versus speed discussion that is not new in Magic. In short, you can play Blazing Volley for a single mana, but you may lose out on opportunities that happen during another player's turn. On the other hand, for an extra mana you can do the same thing with Electrickery at the end of turn, after the table has played down a whole bunch of new creatures.

To me, the wrong card is winning here for the majority of decks. Two mana is still cheap as can be, and the instant speed is more than worth that extra mana.

On the other hand, for a Stormy version of Ghyrson, I do think that Blazing Volley is the better option, as you're going to be more concerned with just getting as many burn spells down as possible.

There are a lot of cards on this list that honestly don't see that much play - and deservedly so - so when I say that I think Impact Resonance is and always has been overplayed, that should more than tell you how much I'm down on this card. A two-mana instant that does nothing on its own and can only target creatures is not a burn spell that should be taking up a much-needed slot. Sure, you can easily imagine a scenario where someone's Gigantosaurus gets involved in combat, and then you wipe half the board. More often, what's going to happen with this stuck in your hand is you're going to tap out because all you see out there is three-power creatures, or you're going to hold mana open for it while your opponents make smart combat decisions and decide not to swing in.

Your plans shouldn't rely on your opponents, which means that unless you're the one with the 10-power creatures all over the place, Impact Resonance should stay solidly in the side of the deckbox.

I've personally got huge nostalgia for Breath of Darigaaz. I also think it's a great four-mana Wrath, especially if you have a bunch of cost reductions where you can get it down to a single red pip. The only issue? There's already a red board wipe that usually costs a single red pip, and it deals 13 as opposed to four.

The only real benefit to Breath of Darigaaz, then? It can deal a single damage to act as a Blazing Volley for decks that don't have many or any small creatures, and it deals damage to players in addition to creatures. It's that second part that has me still playing this card despite it not being as good as Blasphemous Act, but there's a problem: Ghyrson's toughness of two, and his lack of a "may" on his ability.

Innistrad: Crimson Vow brings us the answer to the Blazing Volley versus Electrickery debate: End the Festivities.

I rest my case.

In Ghyrson, specifically, Avacyn's Judgment feels a bit underwhelming. In its two-mana form, it costs double what Forked Bolt does for the same effect, and if you do discard it, you can pay three mana to do the same thing at instant speed (provided you can discard at instant speed). That's not bad, flexibility-wise, especially when you also consider that you can go full Fireball on two targets if you've got a ton of mana sitting around, but it's not really worth it when it comes to Ghyrson, in my opinion.

There are tons of one-mana-for-one-damage burn spells out there, and most of them have upside. What puts Spikefield Hazard above Searing Touch and Spark Jolt is that it's the only one that can also just be a land drop.

With that said, for Ghyrson specifically, Death Spark and Flame Jab might just be even better.

The grand-daddy of them all remains on top! Grapeshot has long been one of the most lethal Storm spells out there, providing one-sided board wipes and outright taking out players on stacks that just seem to keep going and going. Usually, it's a lot to ask to stack up the Storm count of 120 it takes to take out a whole table with it, but with Ghyrson taking that number down to 40.

Our main list is all well and good, but you're going to be running out of gas a lot. With that in mind, why not take a look at the cards that deal one damage and draw you a card?

Top 10 One Damage Spells That Cantrip

And with that, we should have more than enough to get a decklist put together, right?

I'm not gonna lie, this deck is an absolute blast. I still want to do another with The Red Terror at the helm, but having a deck essentially made of Lightning Bolts and draw spells is about as cool as it gets.

If I'm being honest, I more or less chose to do the deck with Ghyrson because I knew there would be a small riot if I didn't, but I honestly think that if I had been thinking more of myself than my readers, I would have gone with The Red Terror. I even found a combo with it and my favorite card, Arcbond (along with Pariah's Shield, just make sure you have the most life at the table)!

My personal biases aside, though...

Finally, what is your favorite spell that pings for one? Are you building either Ghyrson or The Red Terror? Are there other Warhammer 40,000 commanders or cards that you're excited about, even though the world has already moved on to Unfinity and The Brother's War spoilers?

Let us know in the comments, and we'll see you at the kids table we propped up with a couple milk crates.