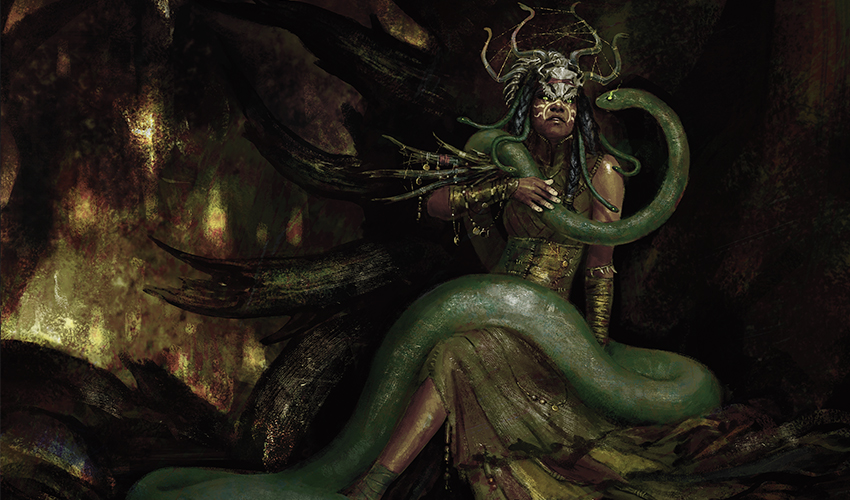 Welcome to Too-Specific Top 10, where if there isn’t a category to rank our pet card at the top of, we’ll just make one up! (Did you know that Molten-Tail Masticore is the only artifact creature that can exile a creature from your graveyard to deal damage?)

Innistrad: Midnight Hunt has brought us all sorts of fun new toys to brew with, but I still haven't gotten over a brewing challenge from one of the first cards previewed:

As the proud owner of a Samut, Voice of Dissent pingers deck (which I've written about on occasion), Saryth, the Viper's Fang feels like it was custom-made for me. Protecting my creatures, giving me an extra untap to reuse their abilities, and transforming each of their pings into an insta-kill? I'm going to have loads of fun performing one-sided board wipes with Saryth and Goblin Sharpshooter, and I revel in the opportunity.

That said, I'm more than aware that not everyone is packing green in their pingers deck. In fact, neither green nor Naya show up at all on the Pingers theme page on EDHREC, but it can now be argued that the pingers strategy has a commander in that color combo. The question is, are there enough green pingers to make a go of it?

Having already done an article on pingers before, I actually have a criteria handy for them:

Criteria: Creatures that tap to deal 1 damage to a creature, planeswalker, or player that isn’t you, either directly or indirectly through an ability that triggers off of said tap effect. As is tradition, all results are ordered by how many decks they are included in on EDHREC.

Oh, we have our work cut out for us here, don't we? Half of these cards don't even deal damage to creatures to take advantage of their newly-gained deathtouch from Saryth, and the ones that do almost exclusively do it only to flying creatures. I mean, don't get me wrong, if you make a Saryth deck, you're absolutely going to include Endbringer and Scattershot Archer, but I think that's where the usefulness of this list ends.

Alright then, let's make things a bit more specific to our commander then, shall we?

Given the evergreen status of both the fight and bite mechanic, there are actually quite a few green creatures that can deal damage directly. The issue is, since they're green, most of them don't feel much like pingers. Sure, you can give Apex Altisaur deathtouch, but that seems a bit redundant, doesn't it? So instead of just looking at all the eight-mana monstrosities that are going to kill everything in their path anyway, let's instead only look at creatures that are likely or able to directly deal three or less damage, so it feels more like a 'ping'. As for the rest of the pinger criteria about tapping and dealing damage to players, it's not particularly relevant in this case, so let's scrap them and see what we get!

Criteria: Green or colorless creatures that can deal 3 or less direct damage to other creatures. As is tradition, all results are ordered by EDHREC score.

"Bite" isn't exactly a household name, but it turns out it does have a commander! It's just too bad you can't Partner her with Saryth. Still, in the 99 she's going to put in work if you have a couple extra mana, and I for one would be happy to pay a Smothering Tithe tax to kill a creature every time I play something!

Now we just need to find a way to tap the creatures as they enter the battlefield.

9. Master of the Wild Hunt

If we're being honest, under most circumstances Master of the Wild Hunt probably falls under the category of "large fight creature" in every way but the technical one. That said, it's also very likely that your little 2/2 Wolf friend he gives you every upkeep will subsequently die fighting a commander to the death(touch), so maybe the technical definition is good enough in this case! The fact that both the Master and the Wolves can be tapped at instant speed to give deathtouch is also incredibly relevant while blocking, so keep that in mind while you're destroying boards.

For those wondering, creatures do look at their last known state on death, so Perilous Myr will indeed reach out and deathtouch something if it was tapped before entering the graveyard. While this isn't the best deal I've ever laid eyes on, there's a lack of direct damage in green, so it probably still makes the deck!

Similarly, four mana to deal one damage is an awful rate. Four mana to kill a creature is better, but still not anything to write home about. Combine all that with having to discard a card on initial cast, and I've never been too impressed with Lesser Masticore. That said, it does fit the theme, it will repeatedly kill creatures, and it is itself hard to kill. I just think overall, while the average Saryth deck will play both, they'll be much happier to see the original Masticore.

Three mana to kill every flying creature on the board is a pretty darn good deal. Combine that with a large rear end that's going to be relevant on the ground, and Silklash Spider seems like a slam dunk.

I'm not sure I could say the same of Jagged-Scar Archers, despite it being our first true pinger. While I do think the average Saryth deck leaning into the pinger strategy should still play these Archers, I don't think Saryth'll be happy about it. It might be a different story if you have a large Elf contingent, which is possible, since the other thing Saryth plays well with is mana dorks that make more than one mana, many of which are Elves. Still, don't expect to go full Elfball here, as the Elves we're discussing are usually three to four mana, as opposed to one.

I don't know why Polukranos still sees as much play as it does. Green is no longer hurting for board wipes, and while it's nice that it's one-sided and can be done at instant speed, the amount of mana required to make it happen is so unwieldy that it's unlikely to happen at all. For my money, if you're going to use 13 net mana to possibly destroy four creatures, you'd be better off rolling the dice with The Great Aurora to see if you come out on top. That math is with Saryth in play, mind you! If you're going to let Polukranos stand on its own feet, then that 13 mana is only going to kill a single medium-sized creature or four mana dorks. In neither case does that kind of math make sense.

It took me a long time to come around on Endbringer in my Samut pingers build. Six mana with a colorless pip is unwieldy at the best of times, and the feel-bads are insane when it just gets immediately removed, even if you get to use it once with haste. However, when it does stick around, it rapidly becomes a problem even without deathtouch, pressuring life totals and killing utility creatures while also giving you the option of drawing a card or keeping a problem creature at bay. While I sometimes curse its presence in my hand in my full Naya deck, I think in a mono-green deck - especially one with a commander that can untap lands and mana dorks - Endbringer will be an all-star that needs to be answered the second it hits the table.

This is why it's important to remember to include your backup commander in your Saryth deck, Thousand-Year Elixir!

At six mana for three damage, it's rare to see Triskelion outside of a combo package, and I think even as hard-up for damage dealers as Saryth will be, this is probably still the case.

That said, good news! There's no shortage of mono-green Triskelion combos, either!

The all-star of the Saryth deck was never in doubt. Walking Ballista will make for a fine mana sink when you're untapping your Gaea's Cradle or Scorched Ruins three times a turn, and will easily destroy entire boards on a whim when you manage to tap it with Saryth in play. If you're looking to go the high-powered route, it also has no shortage of combo potential, most of which overlap with Triskelion and synergize with other Construct damage-dealers, like Clockwork Hydra. In short, break out your wallet, because if you're going to build this meme of a deck, you're going to want this $20 card.

Speaking of Clockwork Hydra, after reviewing our list, it's probably become clear that if you're going to build a Saryth Pingers deck, you're going to be leaning rather heavily on artifact creatures. With that in mind:

What we've entirely ignored with this list, however, is the powerful meme of creatures with first strike and deathtouch. Well, no more!

Will you need to find ways to tap all of these creatures at instant speed when it comes to blocking? Yes, yes you will. Does that make the meme any less great? Absolutely not.

Finally, of course I've been brewing this deck since the moment I saw Saryth previewed, so here's a list for you all!

Finally, what do you think of Saryth? Are you brewing it? If so, are you leaning more into the deathtouch, the untapping, or just using it to protect all your creatures?

Let us know in the comments, and we'll see you at the tappy table that you can tap at will by touching it.