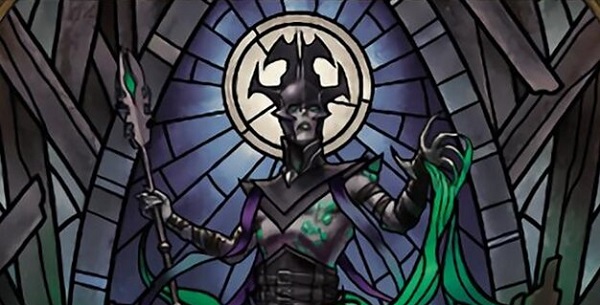 Welcome to Too-Specific Top 10, where if there isn’t a category to rank our pet card at the top of, we’ll just make one up! (Did you know that Aphemia, the Cacophony is the only legendary enchantment Zombie?)

Vigilance has always been an underrated keyword, in my opinion, despite the early days of Magic featuring Serra Angel as a control finisher. In the case of Ratadrabik of Urborg, however, all your Zombies gaining vigilance is an interesting wrinkle, as there are a ton of Zombies that come into play tapped in the first place, or can't block at all.

More importantly is Ratadrabik's second ability, allowing you to kill off legendary creatures to have them simply come back as 2/2 Zombies. But why settle for only using half a card?

There are only 45 legendary Zombies in the history of Magic, four of which aren't legal in the Commander format. Of those, more than half surprisingly don't fall within the Orzhov color identity, what with Innistrad's emphasis on Dimir zombies and Nicol Bolas crafting a cycle of zombified Gods. As such, the pickings for a Ratadrabik deck to double dip are actually a little slim... which happens to be exactly how we like it here at Too-Specific Top 10!

Criteria: Legendary Zombie creatures. As is tradition, all results are ordered by EDHREC score.

Finding enough room for Ratadrabik and Enchantress in the same build would be tough, but more importantly, it isn't really the premise we started from. Even worse, Daxos' experience counter trigger is on cast, rather than enter-the-battlefield, so we don't get credit for recurring enchantment Zombies over and over, as a token or otherwise.

In other words, there's not much synergy here to build off of, so instead, let's use this space to talk about the legendary Zombies that Daxos pushed out of our top ten:

11. Balthor the Defiled: Balthor's exile ability may not seem all that synergistic with Ratadrabik at first glance until you realize that you can exile the token and recur the original copy, letting you have a recurring recur in exactly the way the designers of the card didn't want you to.
12. Gorex, the Tombshell: Gorex unfortunately doesn't mark its exiled cards with a counter, and as such the exiled cards can only be returned to your hand by the original copy. Still, it is a reasonable recursion effect, and a 2/2 deathtouch Zombie doesn't really hurt.
13. Haakon, Stromgald Scourge: Not only does Haakon let you abuse Knights in addition to Zombies (where there's a fair amount of overlap), you're likely to already be playing mill or discard effects that will allow you to cast it from the graveyard. Combine that with the ability to sacrifice and recast Haakon from the graveyard, netting another copy each time, and Haakon is actually a fairly strong choice despite the possibility of it getting stuck in your hand.
14. Korlash, Heir to Blackblade: Korlash may have been the most boring choice of a legendary Zombie available, except for one thing: if you can return him to your hand after the original copy has died, you actually get to use his Grandeur ability from the token!

Josu Vess, Lich Knight's Kicker ability doesn't synergize well with Ratadrabik, but that's pretty easy to overlook thanks to the dream of plopping down nine Zombies with menace and vigilance. Sure, it takes 10 mana to live that dream, so as a result old Josu might not make the 99, unless you're willing to dream big enough.

Ebondeath, Dracolich entering the battlefield tapped is a bit of a bummer, but otherwise this card is complete gas in Ratadrabik. While their toughness doesn't quite equal up to a full-fledged Serra Angel, you're more than happy to swing in for five and then block someone else's attack to get a 2/2 token, then recast Ebondeath from your graveyard during the next player's turn to have them both untap and swing in for seven. Rinse, repeat.

A second option for big mana black decks outside of the infamous Big Mana Drana, Geth, Lord of the Vault is actually much more popular in the 99. This makes some sense, since most players aren't too keen on planning around their opponent, no matter how low the bar is for having random creatures or artifacts in their graveyard. The bigger deal is probably actually how difficult it is in mono-black to get opponents' artifacts into the graveyard, but between the Orzhov color combination and Geth's mill clause, we have no such issue when it comes to Ratadrabik. With the Orzhov color combination available, there's all sorts of spot removal for artifacts and creatures at hand, although unfortunately none of the artifact portion of it is available stapled to a legendary creature. Still, throw in an Austere Command, a Cleansing Nova, and a Heliod's Intervention alongside a Cathar Commando, and you'll have more than a few mana rocks to steal from your opponents to provide you with more mana to mill and steal more mana rocks from your opponents!

If you'd rather spend all of your hard-earned mana instead disproving Einstein's theory of insanity, then there's always Acererak the Archlich. On the surface, he's a dungeon commander that incentivizes you to race through the Tomb of Annihilation. More often in reality, however, what he is is a Storm enabler.

Of course, this is an issue in your average mono-black deck, as there's really only Tendrils of Agony and Reaping the Graves to Storm off with. So instead, people often opt for cast triggers like Bontu's Monument and Diregraf Colossus or enter-the-battlefield triggers like Ayara, First of Locthwain.

For all this to be worthwhile, you'll probably want some cost reduction. Luckily, Urza's Incubator gets Acererak down to a single black pip in one go!

As for Ratadrabik, though, there's not a lot to love as far as synergy here. Acererak is meant to be more in a constant state of entering and leaving the battlefield than ending up in play to take advantage of vigilance or in the graveyard to then be recurred as a token that then immediately disappears if you haven't finished a dungeon. In other words, Acererak only builds around himself.

God-Eternal Bontu is more than happy to be recurred in token form, and will gladly transform all those Zombies you've been horde-ing into new cards in your hand each time she does so. My favorite part, though? Once you sacrifice the original Bontu and a token copy is made, you can use the token's ability to then draw the original Bontu again and start the whole process all over!

Token copies don't count as leaving your graveyard, but as we've explored during our list, if you're doing Ratadrabik right, you're double-dipping with more normal recursion anyhow. In other words, you're more than happy to accept more vigilant 2/2 Zombies into your army, whether they come with extra abilities or not.

Why settle for 2/2s when you could have 4/4s that aren't even reliant on Ratadrabik for their vigilance? Combine that with once again being able to pull the trick of sacrificing God-Eternal Oketra to draw into them once more in a few turns, and what you've got is a slam dunk.

Maybe the most unfair Zombie in all of Magic with Ratadrabik is Mikaeus, the Unhallowed. Being able to sacrifice a legendary creature to get a token of it and then bring back the original immediately is just unfair! It doesn't take much imagination to think about what doing that with a Gray Merchant of Asphodel or a Stitcher's Supplier would do to a game.

If you're really looking to win quickly with two instances of a single creature, then you'd be hard-pressed to find a better option than Sidisi, Undead Vizier. After all, why search for half a combo with a Demonic Tutor when you can just get it all at once? Combine that with an attached sacrifice effect to synergize with your other legendary creatures, and it's fairly easy to say that our number one slot is also one of our number one options.

Having already gone over all of our Orzhov Zombie options while in the process of panning Daxos the Returned, let us instead focus on our non-white, non-black, and Zombie token creators that we missed in our search for unlimited synergy with Ratadrabik.

While Zombies like Neheb, the Eternal and God-Eternal Rhonas won't be available in the color identity of a dedicated Ratadrabik deck, if you did happen to have a larger color scheme in your Zombie deck there's no doubt that they would be a huge benefit in multiples.

As for the not strictly Zombies that will still get you some vigilant biters, Ghoulcaller Gisa will fill the roll of Zombie horde generator and sacrifice outlet all at once, as will Kalitas, Traitor of Ghet. Finally, perhaps the best interaction out there with Ratadrabik in the larger Zombie world is Gisa and Geralf, who allow you to immediately recast your sacrificed Zombies in addition to getting an extra token of the legendary ones, so you can simply sacrifice them again for another token!

552 Zombies in Magic, and only 8% of them are legendary. Break that down to just what's available in Ratadrabik decks, and you only have a pool of 16 to choose from, about half of which are only okay. You may be thinking, "But what about the legendary creatures that create Zombie tokens? You've barely scratched the surface with those." Unfortunately, there are actually only 11 of them available in Orzhov, five of which are already Zombies. In other words, you're eventually going to have to choose in your Ratadrabik deck whether you're a Zombie deck, or a Legends deck.

With that in mind...

Finally, what is your favorite Zombie legend you'd like to recur with Ratadrabik? Are there any great non-Zombie legends we missed?

Let us know in the comments, and we'll see you at the hand-painted, hand-carved table that got left out in the elements for a decade before being found and refurbished for our use.