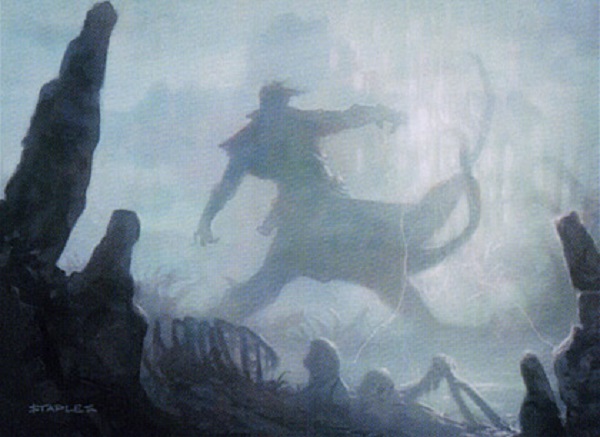 Welcome to Too-Specific Top 10, where if there isn’t a category to rank our pet card at the top of, we’ll just make one up! (Did you know that Squee, Goblin Nabob is the only creature that can return itself from your graveyard to your hand at the beginning of your upkeep without paying any mana?)

The upkeep step is one of the most interesting parts of Magic. From the first moment you learn the game, the mantra you're generally taught to start each turn is "Untap, Upkeep, Draw". It's not immediately apparent in your average Sealed environment why the person teaching you has harped on this strange upkeep step so much, because it doesn't seem to do anything. It's only when you play more and more of the game that you eventually run into a few cards with the words "at the beginning of your upkeep". However, for those of us that play Commander, those six little words aren't a rarity at all - they appear in just about every deck.

From the Cumulative Upkeep of Mystic Remora and Glacial Chasm, to the fast mana nonsense of Mana Crypt and Mana Vault, to the fast-paced "each upkeep" triggers of Tendershoot Dryad and Midnight Clock, upkeep triggers are everywhere in our format, at every power level.

But what if we strayed back into that mantra, "Untap, Upkeep, Draw", and changed it a little? What about those times when you can have two upkeeps?

Paradox Haze was only ever printed in the original Time Spiral set, and it allows you to enchant yourself to double your upkeep steps. This can lead to all sorts of shenanigans, though the place you'll most commonly see Paradox Haze are the decks whose commanders have very impactful upkeep triggers, such as Jhoira of the Ghitu, Zedruu the Greathearted, and Braids, Conjurer Adept.

Those might be the most popular places for Paradox Haze, but what other cards can be abused with multiple upkeep steps?

While there are a few spells that create single upkeep triggers (mostly in the form of Ice Age's cantrip mechanic, a la Arcane Denial), these don't really benefit from an extra upkeep step, as they only matter in a single instance. In the same vein, Ice Age also brought us Cumulative Upkeep, which, with the exception of Braid of Fire and Psychic Vortex, isn't going to do anything positive for you when doubled. Still, at least one of those is a very popular card, so I don't know that I want to take the whole mechanic out of the running for this Top 10. Instead, let's look at what Cumulative Upkeep - and upkeeps in general - usually make you pay.

There we go. If we take away paying mana, paying life, sacrificing creatures, or discarding cards, then we should have a fairly good idea of which upkeep triggers are actually beneficial when they get doubled.

Criteria: Permanents with an upkeep trigger that doesn't require you to only pay mana or life, deal damage to only yourself, or make you sacrifice a permanent or discard a card, and that is also relevant in multiples. As is tradition, all results are ordered by EDHREC score.

All right then, let's take a look!

Sigh. Longtime readers will know that Outpost Siege and I have not always gotten along, but I must admit that if you were going to double your upkeeps, it would be a beneficial tool. Even in that case, I'd still be more tempted to go Vance's Blasting Cannons, but I'm more than willing to admit that this is just my personal bias/vendetta. Maybe the bigger deal is that if you're already in blue for Paradox Haze, then you can do better than impulse draw anyway. For the same amount of mana, you can play the aforementioned Psychic Vortex to really get out of control, or the more reserved Kumena's Awakening to just draw a card that isn't stuck to a timeline. For less mana, you can stack some counters on Midnight Clock to wheel just yourself, and for more mana, you can draw uncontrollably with Mind Unbound.

If you're going to double things up, however, then it's hard to go wrong with an extra token. Bitterblossom will even do you one better, and give you an extra flying token! Sure, it's not as impactful as a Progenitor Mimic, but at two mana, it's a lot more efficient. Just make sure you keep an eye on that life total, because the life loss gets doubled too!

If you're dead set on drawing some cards, then Colossal Majesty has your back, and at a lower rate than the other options we've discussed so far. However, the drawback can be serious; you need to have a big creature already on the board, or this doesn't do anything, so make sure you aren't throwing this in just any deck.

Similarly, Bob doesn't fit in just any build, because you could lose a lot of life as you double up his upkeep trigger. Still, it does draw you an extra card every turn for a measly two mana, and comes with a body for swinging or sacrificing as well. There's a reason it's been a staple of the 60-card formats ever since it was printed. For us EDH folks, I'd say if your average mana value isn't down in the 2.5 range at least, you probably want to confide in someone a little less sinister.

Our criteria was fairly specific that we won't include any upkeep that doubles up on sacrifice triggers... of your own stuff. Sheoldred, Whispering One sidesteps that nicely by only including your opponents in the sacrifice party, while you can double up on returning creatures from your graveyard to play. Now there's some card advantage that also affects the board!

Two scry triggers is easily the least impactful upkeep effect we've seen so far. Honestly, I've never been in love with Lifecrafter's Bestiary. The "draw a card when you cast a creature" effect is available in all sorts of different ways these days, many of which you can cater to a specific deck style, so paying an extra mana every time just seems unnecessary. I'd much rather pay mana one time and get a Beast Whisperer or a Guardian Project, which doesn't even get into the other three-mana options in the form of Elemental Bond, Garruk's Uprising, Selvala, Heart of the Wilds, or the aforementioned Colossal Majesty.

Speaking of card draw that you can cater to specific decks, Herald's Horn! This all-time tribal staple both cuts down on the cost of your chosen creature type and also lets you potentially pull one off of the top of your deck during your upkeep. As for how it stacks up with Paradox Haze, however, the results aren't always great. Unlike a lot of the "draw a card" options, if you swing and miss on your Herald's Horn trigger, the same card will just be waiting for you to sadly peek at again on your second trigger.

You know what's better than drawing two cards at the beginning of your upkeep? Drawing six, and all at the low, low cost of a single mana! Land Tax is one of those quintessential "this never would have been printed in modern Magic" cards from the early days. Originally printed in Legends, it immediately impacted the tournament scene at the time, and has been banned in several formats. Just make sure you leave some basics in the deck! Pulling three at once, it's easy to run out quickly, discard them all because you can't play them, and then Rampant Growth into nothing later on in the game!

If you thought Lifecrafter's Bestiary was less than impactful, then you ain't seen nothin' yet! Doubling this trigger isn't big, but you know what, I don't have it in me to speak ill of Inventor's Fair. For the low opportunity cost of a land slot, it can gain you some life and tutor an artifact in your artifact deck, which is obviously a huge deal. And you know what, while it may not be blowing anyone away with Paradox Haze, two life a turn does add up!

Why gain life in multiples when you can lose it instead? Wth Paradox Haze, you can tell the smarty pants across from you who's explaining to you why you should be playing Sign in Blood instead that you're just fine drawing two cards a turn off your Phyrexian Arena, thanks.

As previously mentioned, there are a lot of cards to avoid if you're living that Paradox Haze lifestyle, so as usual, I decided we should have another list! Let's briefly go over those cards the Haze wants to avoid.

Did I make a top 11 just to chuckle at the idea of a Stasis player paying double? Yes, yes I did.

As for the rest, I'd be remiss if I didn't mention some of the biggest effects from the actual Paradox Haze EDHREC page:

Looking through the EDHREC page, you'd think that Paradox Haze was almost exclusively here for the Shrine strategy. That's not quite true, but it is the majority, with 70% of all decks that include Paradox Haze also playing Sanctum of All.

Some of you have probably been yelling at your screen for most of this list that there's another option for multiple upkeeps besides Paradox Haze, and yes, I am aware of the existence of Sphinx of the Second Sun. It's also just eight mana. Still, it's nice to untap and draw again!

You'll have to be a bit heavier on artifacts for Mechanized Production to shine (although there's plenty of upkeep stuff in the artifact world as well), but getting an additional copy of a crucial artifact every turn can be absolutely game-winning.

If you want to see a whole bunch of your deck and end up with a lot of cards in your graveyard, there are few more efficient ways to do that than with a Paradox Haze and a Forgotten Creation.

Writing up all of the cards that could revolve around a single, nonlegendary enchantment really begs the question: who cares? For me, I was thinking about putting together a Paradox Haze deck that's designed to find it as soon as possible and then reap all the value from doubled upkeeps.

So, I'm curious to hear what you all think about these types of decks!

Finally, what's your opinion on Paradox Haze? Do we need more design in this space? Would you like to see a commander that plays around with additional upkeep steps?

Let us know in the comments, and we'll see you at the unbalanced table we've all been meaning to fix for a year or two now.