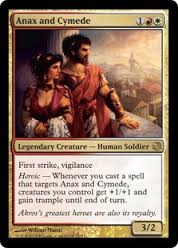 Welcome to the 5th edition of Ultra Budget Brews, the series that builds entire EDH decks where nothing costs more than $1! (I totally should have named this series Dollar General. To you, the reader, I apologize.) Recently, I discussed how the rules of EDH tend to lead to a few different archetypes of decks being underpowered and underplayed. If you want an explanation about this, I’d encourage you to read my previous article. The Cliff Notes version is that burn and aggro are typically underpowered, because EDH games are multiplayer and everyone starts at 40 life. Last time, I tried to make burn work, and this week I plan to try and make Aggro work. Aggro decks want to win the game as quickly and efficiently as possible. This probably sounds quite a bit like burn, but the main difference is how they typically do the damage. Burn likes to throw one-shot instants and sorceries at the face while aggro likes to get there with creatures. There are pros and cons to both strategies. Burn is harder to interact with in a meaningful way, but more easily runs out of gas while aggro gets more damage out of each of their cards, but is also much easier for opponents to interact with (EDH players often have a bit of a love affair with board wipes and removal).

Typically, the most effective answer to this dilemma is a Voltron strategy. Attach a bunch of swords of value and stuff onto a hexproof monstrosity, hit someone for 21 damage, rinse and repeat. Problem is, most of the best commanders and best equipment are pretty expensive, faaaaaar more than our $1 limit. So, what’s a budget conscious player to do?

Welcome to the A and C dance factory

Our commander today is a little loved legendary from Theros. Theros is probably my favorite block of all-time (ok, tied with RtR), though I know many people really disliked it. I grew up loving Greek mythology, so I’m certainly a bit biased, but even excluding the flavor, I actually really enjoyed many of the block’s mechanics, heroic in particular. Our commander(s?) today features this mechanic. (All of the prices on EDHREC now reflect prices at CardKingdom.com, so I’ll be using their prices from now on.)

This deck plans to attack early and often. Often, games of EDH can devolve into people doing nothing but playing ramp and mana rocks for the first five or so turns. Our deck is built to prey on these sorts of decks. I’ve played this deck a fair number of times online and you’d be surprised how many decks simply fold under the weight of your draft chafe.

Our non-lands our divided in to two basic groups: Heroic Creatures and Heroic enablers. Our Heroic creatures are often kind of wimpy looking (stats, not art. Have you seen the abs on Phalanx Leader? Dude clearly lifts), partially because they all cost very little mana, but if you are willing to put in the work to trigger them, they can do a surprising amount of work.

Heroic encourages you to have a lot of spells that target your own creatures, typically instant speed combat tricks. Combat tricks are normally fairly poor in EDH, but Heroic helps us get enough value out of them to be worth it. Also, there are few better things than pumping your commander with Brute Force, Titan’s Strength, and a Temur Battle Rage on turn 4. That tingly sensation you just felt when thinking about that? That means we are on to something. The biggest trick to playing the deck is figuring out when to go for the kill with a bunch of pump spells, how many threats to deploy, and how to navigate the table politically. You are very effective at shotgunning down one poor soul, but that gets significantly more difficult once your opponents have seen it happen. Also, people don’t like getting booted from a game that quickly, so it can definitely draw some player’s ire if you aren’t careful. Don’t do it to the same person every game, and you’ll probably be ok.

Another problem that Aggro decks face is removal. You are Boros colors, so you don’t have a ton of traditional card draw or card advantage, which means removal is more impactful when played against you. I suggest sandbagging a creature or two in your hand. If casting the creature won’t help you win the game significantly quicker, all it does is make your board look scarier than it actually is, often drawing out a wrath. Save a threat back for when the wrath inevitably happens so you aren’t just sitting there twiddling your thumbs, top decking, and scrolling through Facebook. Typically, the additional cost on strive made the cards fairly uninspiring, but this one is the exception. One of my favorite cards with strive, this cheaply triggers heroic on your creatures and gives lots of fodder for A and C to pump. Bonus points for art that is reminiscent of Homer’s Iliad. Firebreathing is an ability that always strikes me as a trap. It’s kind of like playing with a hand full of pump spells and combat tricks, but your opponents can see all of them. Sure, sometimes the firebreathing effect will be fine, but really, the ability to bounce this for a single mana is what we’re after. This can allow copious amounts of heroic triggers, be returned to your hand in case of removal, and in Magical Christmasland, draws all of the cards with Mesa Enchantress. Magic the Gathering printed an homage to Oprah. It’s a goblin, so maybe someone at WotC isn’t a fan of her show, her network, or Book of the Month clubs. Celebrity homages aside, allowing your pump spells to target all of your creatures can get pretty absurd. Pair with things like Expedite and Defiant Strike for actual card draw in Boros colors. Who knew such a thing was possible? Targeting two creatures with one spell is the bee’s knees, especially for a single mana. The stat boost is marginal, but that barely matters as this allows you to get double the expected triggers, at instant speed. Radiance is a terrible mechanic. Truly. Seriously, do a Gatherer search (fine. I’ll do it for you http://gatherer.wizards.com/Pages/Search/Default.aspx?action=advanced&text=+[radiance]) Hot. Garbage. Then again, so is McDonalds, and yet, here I am, craving a McDouble. If you see any of these cards in your group on the regular, we should party sometime. This is Magic’s version of movies that are so bad they somehow loop around and become good again (Trolls 2, The Room, etc). Should you play Bathe in Light? Probably not, but it’ll get a laugh when you use it to alpha strike that guy who is hiding behind gobs of critters. Keyword Soup. A and C give first strike and vigilance already, and you have lots of ways to add a variety of other keywords. It creates a fun subgame in which you try to give your team as many keywords as possible, a bit like having a team full of Baneslayer Angel. While admittedly a bit boring, if you have a white deck, Sun Titan has a place in it. It’s kind of like telling someone to put Sol Ring in your deck. They should, it’s not interesting, and yet, here we are. It’s simply too good not to and you need a reason to not add it as opposed to a reason to add it.

Sword of the Animist Boros sucks a hard at ramp. While Sword of the Animist doesn’t totally solve this problem, it certainly helps. It gives a stat boost and rewards you with ramp for doing the thing you were planning on doing already, attacking. This card easily slots into a large variety of non-green decks. Boros gets a bad rap in EDH (with good reason), but goodness there are some sweet commanders. Aurelia is definitely one of them. Extra combat steps are good, particularly in decks that want to do little more than go completely balls to the wall. Also, in this deck, you are essentially getting double the value out of any combat tricks you decide to use, since you are attacking twice.

Hopefully, this will inspire you to give aggro a shot at your next EDH night. Few things will get your group to add in a bit more of an early game than an EDH deck with an actual mana curve. Did I miss anything glaring? What have your experiences been with aggro in EDH? Will WotC ever print a legendary creature that does anything besides turn sideways? Let me know below!