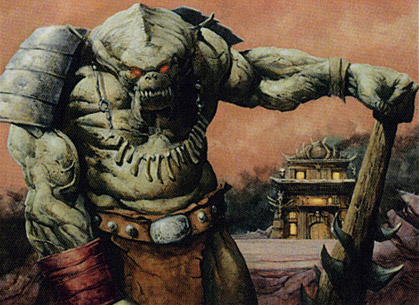 Welcome to the 3rd edition of Ultra Budget Brews, the series in which we build entire EDH decks in which every card costs under $1. EDH as a format lends itself to certain kinds of decks. Much of this can be attributed to three rules that are a part of the format's foundation: 100 card singleton, 40 starting life, and (usually) multiplayer games. There are two specific deck types that typically are underpowered as a result of these aforementioned rules. These two deck types are Aggro and Burn. If you have played much magic in any other format, you likely know that the best budget decks typically fall into one of these two categories.

The problem is (assuming a 4 player game) instead of having to blow through 20 life, you have to get through 120 life. Obviously, your opponents will somewhat help with this goal, but certainly not enough to split the difference. As a result, aggro and burn decks are generally not seen much in games of EDH. Do your playgroup's games typically turn in to 2+ hour durdle-fests? Do you want to get it in multiple games, but never seem to have the time? Do you just like to watch the world burn? If you answered yes to any of the above, then a burn deck may just be the very thing you are looking for.

A burn deck, for the uninitiated, seeks to get your opponent's life total to zero as quickly and efficiently as possible. Your life total is nothing more than a resource used to buy you more time to find the necessary cards to finish off your opponent. In a normal burn deck, you have a bunch of low casting cost cards that all do 3 damage, which gives you a ton of consistency and inevitability. This simply doesn't work in a game of EDH. Life totals are too large and everyone else is likely going to be doing incredibly powerful things that cards like Lava Spike and Lightning Bolt couldn't do in their dizziest daydreams.

Lava Spike is Anakin. His power should *definitely* be underestimated.

So how does a burn deck keep pace? I believe that Heartless Hidetsugu is the answer to that question. It halves all life totals, which is very powerful. The fact that this can be done repeatedly, for the slight cost of tapping a creature, is bug nutty.

Notice that the cards above fall in to a couple of broad categories:

I am a firm believer that EDH decks need a way to win out of nowhere. This one does so in a pretty novel manner: by having an odd life total while everyone else has an even life total. I'll explain. Hidetsugu's ability reads that it does damage to all player's equal to half their life totals rounded down. Example: You have 30 life, tap Heartless Hidetsugu, you lose 15. If you have 29, you lose 14 since half of 29 is 14.5, which you then round down to 14. So, what you do is put a damage doubler down (Dictate of the Twin Gods, Gratuitous Violence, etc.) and tap while Heartless Hidetsugu while you have an odd total of life. The damage will be doubled, leaving you at 1 and leaving any of your opponents with and even life total dead. If they were at an odd life total, they will be at 1 life as well, and you likely be able to finish them off with one of the many burn spells in your deck. Another cute trick you can pull of with this is to simply end the game in a draw. If you are getting crushed (it happens), instead of losing the game, you can simply use the above, or Grafted Exoskeleton, to cause the game to end in a draw, turning Heartless Hidetsugu into an aggressive version of Divine Intervention. This card is highly underrated. Being able to trade life for mana is pretty powerful, not to mention you can do so at instant speed. Also, the fact that you are paying an odd amount of life can be super important as it allows you to change your life total from even to odd, letting you avoid one-shotting yourself with your general. All of that while also helping power out giant ‘X' spells. Sold. If your group doesn't play targeted land destruction, a game or two of facing this land will teach them the error of their way. The restriction of not being able to attack doesn't effect this deck in any appreciable way, while preventing all incoming damage for a number of turns is incredibly helpful and generally gives you the time you need to win the game. The sorcery gets better the more players are playing. EDH players are known for their love of casting huge, durdly spells. To cast these, they need lots of mana, which typically means lots of lands. When you find the right time to fire this off, you are often netting 20+ mana. If you manage to copy this spell, well, I've heard Comet Storm for 40 is pretty good. This is, admittedly, a pet card of mine. It was one of the first cards that I ever actually brewed with (quite unsuccessfully). It can seem pretty innocuous at first, but the damage adds up in a hurry. Once your opponents clue in to what's happening, you'll have a target on your back, but hopefully, the damage will already be done at that point. This is easily one of my favorite cards printed in the last couple of years. It may look like a slow mana rock (it is), but it is so much more than that. Need to destroy multiple artifacts? Double Vandalblast. Make roughly a zillion mana? Double Mana Geyser. Need all of the damage? Double Fall of the Titans. Want to do lots of math? Double Reverberate. Seriously. This card not only wins games, but it wins them in an entertaining fashion. A highly entertaining card that also encourages your opponents to attack elsewhere. Also, this works beautifully with damage doublers. If you cast a Fireball for 5 damage targeting Stuffy Doll, the damage done to Stuffy Doll will double to 10. When Stuffy Doll redirects this damage to an opponent, it gets doubled again, becoming 20. Seems good. Your opponent casts Blasphemous Act? Someone is taking 52 damage. This gets silly in a hurry. If you are lucky enough to live in a place where fireworks are not illegal, then you likely grew up messing around with a variety of small explosives. As kids are not known for dexterity, or their ability to make smart decisions, you likely got burned at some point as a result. Fortune Thief is essentially the pair of gloves you should have used as a kid. When you decide to light the world aflame in a spectacular way, it makes sure you don't get burned too badly. Just, you know, regular bad. Giving haste to Hidetsugu is super important. Giving the ability to untap him leads to some incredibly explosive turns. This is a card that is pretty niche (creatures that likes tapping), but like most niche cards, is astonishingly powerful within that niche. This card, admittedly, goes in pretty much every red deck. It's simply that good. Red's removal is typically damage based, which means it can be more difficult to deal with threats with big butts. Blasphemous Act gets around this issue by doing so much damage that most everything is going to die to it. The fact that its mana cost shrinks for each creature you are hoping to knock off, is great.

What do you think about this attempt at making burn relevant in Commander? Do you have any experience with, or against, this kind of deck? Any suggestions or requests for commanders you would like to see in this column in the future? Let me know below!