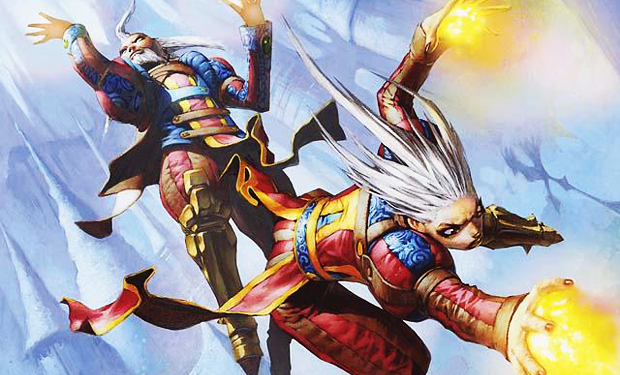 Welcome back to Ultra Budget Brews, the article series that builds EDH decks where every card costs less than $1. Up to this point, the decks I brewed for this column are ones that I personally owned and played. Writing about these decks was fairly easy, because I had a decent amount of real world experience and could get to know the ins and outs of each one. Even though each deck brewed here were complete card-for-card copies of the decks I ran; prices fluctuate and I'm continuously tinkering with my decks.

Sadly, I finally reached the end of my personal decks with commanders that cost less than $1. Knowing this, I decided to reach out and discover what you, my faithful readers, would like to see. I gave five options and your votes decided this article's commander. I had a feeling going in about which one was going to get the most votes. Lo and behold, I was right. EDH players seem to enjoy seeing cards that are less known, less popular, and less played. Sure, playing Animar, Soul of Elements or Atraxa, Praetors' Voice is fun, but playing against Lady Evangela? Gwafa Hazid, Profiteer? Sasaya, Orochi Ascendant? Those are the kinds of decks that are often memorable. Today's commander definitely fits in among the latter group.

I agree, Christoph Waltz. I agree. First off, I was pretty excited that you all chose Tibor and Lumia. I'm an Izzet mage through and through, and this was definitely well within my comfort zone. It also gave me an excuse to brew with a commander I've never played with, but have always wanted to make work.

I don't want to belabor the last Con, but have you seen the other Izzet generals? It's a who's-who list of very powerful, easy to build around, commanders. With the possible exceptions of Kraum, Ludevic's Opus and Ludevic, Necro-Alchemist (who get a pass because they have the Partner mechanic), Tibor and Lumia are definitely the most difficult to build around.

You may be thinking that I should just build an Izzet 'good stuff' deck. I could, but if I wanted to do that, I could do the same thing with Melek, Izzet Paragon or Jori En, Ruin Diver and still have my budget restriction intact and arguably a more powerful deck. So the question becomes, how do we build a Tibor and Lumia deck that fits what they are trying to do and isn't just a worse version of every other Izzet general?

Have You Seen my Wizard, Tibor?

The creatures almost all interact in some way with instants and sorceries. There are a few exceptions, but I'll get to those in a minute. Cards like Nivix Cyclops and Kiln Fiend are some of your main win conditions. They can hit for all sorts of damage out of nowhere, especially if you manage to give them evasion and/or double strike. You have a variety of utility creatures, like Goblin Electromancer, Niblis of Frost, and Guttersnipe that make your instants and sorceries easier to cast, or give you extra value when you do.

The creatures that don't directly interact with instants and sorceries are there to give your team flying. Cards like Archetype of Imagination and Wonder give your team evasion and make it so your team is not damaged by Tibor and Lumia's ability, which is often important.

Our instants and sorceries fall into one of two basic camps. First, we have the combat tricks. These are the cards that allow us to do lots of damage. Examples of these are Psychotic Fury, Leap of Flame, and Dynacharge. The second group I consider utility: card draw, card selection, and removal/counters. Every deck needs these elements and the Izzet colors happen to do it reasonably well. Also, we have a lot of multicolored cards. Being able to trigger both of T and L's abilities is helpful and gives more value to each of our cards.

Our artifacts either help us ramp, which is a notable Izzet weakness, or get cards that further aid our game plan. Perhaps my favorite of these is Scroll of the Masters. It's not a card you often see, but happens to be perfect in a combat-based, spell-slinging deck. Runechanter's Pike fulfills a similar role.

The most difficult thing to do when building on a budget is crafting a consistent land base. Good lands are often very expensive, and, as such, are typically the first thing to be sacrificed for budget restrictions. Thankfully, basic lands cast our cards as well as any dual. Really, unless you are building a very color intensive 4 or 5 color deck, you should probably play more basics than you are. Admittedly, there will be times where a tapped dual land costs you, or when you are struggling to cast cards with more color-intensive costs, but these situations come up less than you would think, especially with two-color decks.

Our land base plays basically every UR dual we can find for under a dollar, and a bunch of basics. As mentioned previously, we are running quite a few multicolored cards, so having all of your colors is pretty important. In fact, almost 1/3 of our non-land cards are multicolored, so getting both of your colors going should be a priority. This may be my favorite card in the deck and I am surprised its not in more Tibor and Lumia decks. In fact, it doesn't even crack Tibor and Lumia's page. If you have Tibor and Lumia on the battlefield, every time you cast a blue spell, which you have a lot of, you give a target creature that your opponent controls flying, and they sacrifice it. The visual I get in my head is of someone who tries to juggle eggs, realizes about a half second too late that they've made a horrible mistake, and lets all of the eggs come crashing back to earth, covering themselves in yolk and shame. Obviously, I've never done anything like this. Basically, you do the same trick as with Dismiss into Dream, except instead of the creature being sacrificed, you get to steal it. Opponents playing a bunch of creatures that you could never afford? Not anymore. Why buy it when you can just steal it? If this seems really fun, it's because it is. The caveat (why does there always have to be a caveat?) is that if you lose your Willbreaker, you lose all the creatures you stole. Then again, that's what you have counterspells in your deck for. This one was actually suggested to me by Sylvan Hancock in the comments of my Horobi article. I had completely forgotten that this card existed. As your team should have flying a fair amount of the time, making them more powerful while in the air seems like a solid game plan. Shrinking anything without flying can be a nice effect, as it will help buy you more turns. The dream is to pair this with Archetype of Imagination. This card is, admittedly, a pet card of mine. Is it expensive? Yep. Is it restrictive? A bit. Does it win the game for you absurdly quick? In the right deck, definitely. Thankfully, this is that deck. In a spell-slinger deck, this is an awesome win con. It aids what you are already planning on doing, casting lots of instants and sorceries, and gives you additional value for doing so. At first, your opponents will be able to ignore it, as one or two extra damage isn't exactly scary, but this card snowballs in a hurry.

The below section is a list of cards that I would have added in if they had met the budget restriction. If you don't care about budget restrictions, want to ramp up the power level of the deck, or just have an extra copy of one of these cards sitting in your binder, these would all be solid additions. This is likely the first card I would add in to the deck if I had the money. It's basically a cheaper, more difficult to remove Willbreaker, that steals every creature without flying your opponents control. Stealing all of your opponents creatures is never bad, at least for you. This card just barely misses the cut. The effect it can have on a game relative to its mana cost is nutty. Cast a few instants or sorceries and you have yourself an army in a can. Make sure you either have some way to give them all flying or avoid casting red spells with Tibor and Lumia out as your elemental army is pretty fragile. This is basically the older, jaded, pissed off version of Young Pyromancer. While Young Pyromancer can make a nice small army, this card can create huge monsters. As an added bonus, if you ever are done with the enchantment and desperately need all of spells back from your graveyard, you can do that. This card is phenomenal. Kamigawa block has a ton of hidden gems if you know where to look. This definitely qualifies. Attach this to Tibor and Lumia, cast a red spell, tap down all of your opponents' flightless creatures. They don't get to untap until Neko-Te is dealt with. Seems solid to me. Take everything I just said above, but instead of tapping the creatures, exile them. Also, the sword can help get you there with commander damage in a pinch. Be warned that this does exile your own creatures as well.

How would you build Tibor and Lumia? Is it pretty close to what I did, or would you go an entirely different direction? Let me know below!

No poll this week as I will be looking at some budget goodies from Hour of Devastation. Not to worry, you'll have a chance to vote next time!