Hello, everyone and welcome to a special edition of the Underdog's Corner! If you noticed the title, we are focusing on one of the silver-bordered legends from the newest set, Unstable! While silver-bordered cards are only legal until the banned and restricted announcement for Commander in January, I thought it would be fun to take a break and take a look at one of the newest legends from the set. While EDHREC currently does not support the Un-commanders, we can still use EDHREC's data to help us make informed deck-building choices.

Speaking of data, how do we even know that our newest commander is even an Underdog? Are we about to bring in a ringer? Worry not dear reader! Using the deck stats from MTGGoldfish, I searched for each legal commander from Unstable, and our newest entrant had the fewest listed decks with only 2 entries. Without further ado, I would like to introduce you to our commander of choice, Dr. Julius Jumblemorph! 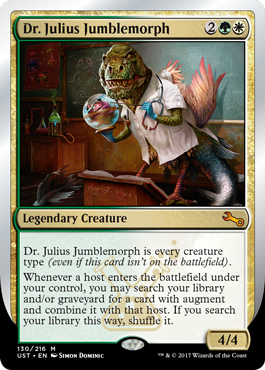 Among all of Unstable's legendary creatures, Dr. Julius Jumblemorph (hereby referred to as Dr. J) is probably the closest to being viable in black-bordered Magic. Honestly, it seems like the only reason he isn't black-border is because he enables a silver-bordered mechanic. We'll get to that in a minute though. Notably, he has no creature type line. Mechanically, there is no difference between Dr. J and any other changeling; they are all creature types in all zones at all times. However, a user on reddit said it best: Changelings can become any creature type they want while Dr. J is every creature type at once. Now for the silver-bordered shenanigans:

"Wait, what is a host? And what on Bablovia is a card with augment?" If you are out of the loop, let me catch you up to speed. "Host" is pretty unremarkable; it's an additional super-type that serves only to mark cards that are target-able by the "Augment" activated ability. Otherwise, all host creatures do exactly what normal creatures do. One thing to note is that every host creature has an enter-the-battlefield (ETB) effect. Cards like Conjurer's Closet and Panharmonicon put in a lot of work with our silver-bordered cards. 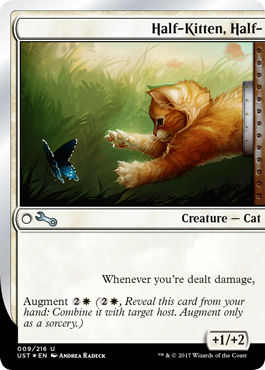 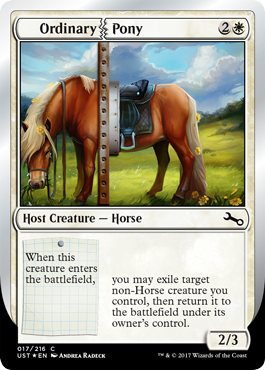 Next up is augment! While augment cards look strange, they are still considered creature cards. This means that tutors like Fauna Shaman and Eladamri's Call can find whatever host or augment card we would want. With the various combinations, we can mix and match our hosts and augment cards on the fly to match any situation. Mechanically, an augment card replaced the ETB effect on the host and replaces it with another repeatable trigger. Another notable thing about augment cards is that they have no mana cost, i.e. they have a mana cost of zero. While this only matters while not on the battlefield, this means that cards like Ranger of Eos can tutor for any two augment cards as well as any other utility creature with converted mana cost one or less.

That was a bit of a detour, but now we're back on track. Now that we've covered what a host creature and an augment card is, we can appreciate the power of Dr. J a little bit more. Any time that a host creature enters the battlefield, we can search our library or graveyard for a card with augment and combine them. This ability would be good even if we only tutored the card to our hand, but by being able to tutor straight onto the battlefield, we have the advantage of adjusting on the fly and gaining immediate benefit. Looking through the list of augment cards, all but two of them require three or more mana to augment. Not only do we have the flexibility of tutoring, but we are also getting to be mana efficient on the way there.

The Ugly, the Bad, and the Good

Now for the downsides... and maybe some upsides as well. Augments are effectively like auras. They can't exist by themselves on the battlefield, and worse if they end up on the battlefield without using their activated ability, they move to the graveyard. This means tutoring a Half-Squirrel, Half- onto the battlefield does nothing. Additionally, just like auras this mechanic opens us up to being 2-for-1'd quite often. All of our effort and mana can disappear in the blink of an eye if we get hit by a well-timed removal spell.

Change in the Blink of an Eye

Speaking of blink, there is actually one notable advantage to having an augmented creature over an enchanted creature. Once combined, an augmented creature (both cards that make it up) are treated as one card; they move through zones together. This means that we can blink our hybrid monstrosities with cards like Restoration Angel or Eerie Interlude and not lose any of value.

So let's use EDHREC to help us find some more cards to support our strategy. We've already talked about the strength of Panharmonicon in the deck as well, so we can be confidant of making this a sub-theme going forward. These commanders are the top three hits for commanders that include Restoration Angel. While we won't be able to use any blue cards, we can still gain valuable information from these legends. We won't spend too long on this, so we'll only look through one legend's page. Since Roon of the Hidden Realm is a well-known and long-time leader of blink decks (along with being green and white), let's choose him.

Roon of the Hidden Realm

A quick glance gives us an idea of what we can include. We need to remember that blinking is only a subtheme for the deck, and that we don't need to stray too far or else we might just become a green/white Roon deck. For our purposes, we're looking for cards that can enable a blink sub-theme or at least benefit from it. We should keep in mind that all of these cards should be able to stand on their own.

If we're going to talk about Restoration Angel, we'd be remiss to not talk about Thragtusk in the same breath. While these two may not be as dominating in Commander as they were in Standard, we can still benefit from this iconic combination. One thing to consider with this sub-theme is that it started with the idea of protecting our augmented creatures. This means we're going to want to have instant speed answers to removal. Sorry Flickerwisp, but you've been benched for the new-ish kid on the block. Eldrazi Displacer was hailed as a white Deadeye Navigator upon release, and since we're only running two colors we can afford to run a manabase that can easily take advantage of its abilities.

Sometimes the best kind of support cards are ones we already want to run. Acidic Slime, Wood Elves, and Reclamation Sage are green staples that are useful and powerful even if we don't have ways to re-use their abilities. For a less obvious answer, we have Angel of Serenity. Removal and recursion in one solid package. We can remove threats from the field, put reanimation targets in time-out, or set up an insurance policy for our own cards. This angel can do it all. Notably, Angel of Serenity has the old Oblivion Ring templating. This means we can bounce her in response to her first trigger to permanently remove threats. If you have questions about how and why this works, you won't find them in this specific article, but the answers are out there!

Turns out a Leopard CAN Change Its Spots

With all of this discussion over augmented cards, half-squirrel, half-horses, and blinking things in and our of existence, there's still an important part of Dr. J's toolbox we haven't explored. Dr. J is now our second legendary creature that is a "changeling" in function. No longer will Mistform Ultimus be the only punchline for those who might say, "But horse-tribal DOES have a legendary creature!" However, Dr. Julius Jumblemorph can now take the throne as the king of all tribes (until January). The best thing going for our illustrious Dr. J is that he is in much better creature colors than Mistform Ultimus as having access to green alone makes up a lot of ground.

For this article, we're not going to focus on our dinosaurs-chicken-shark-professor heading up an oddball tribal deck or even a tribal changeling deck. Rather, we're going to look for utility cards that fit into the deck regardless of what else we choose to include.

The Tribe has Spoken

Thanks to Commander 2017, we have one of the sweetest new lands at our disposal. With Dr. J at the helm, Path of Ancestry let's us scry 1 every time we cast a creature. There are no sacrifices or concessions we have to make during the deck-building process to gain maximum advantage from Path. Over the course of the game, this type of card-filtering adds up. We even have some tribal support that benefits from this effect. Descendants' Path is a card that lets us generate free creatures with Dr. J out. Angel? Elf? Dragon? Hound? You name it, and Descendants' Path can cast it.

One of Dr. Julius Jumblemorph's overlooked features is that he is a four-mana 4/4. Usually commanders have small bodies despite their mana costs, but our every-creature-man has the stats of the entire animal kingdom behind him. This can really pay off once we add in a few buffs. Konda's Banner is a symmetrical buff, and I would have to test it to advocate for it with confidence. While equipped to our commander, every creature gets +1/+1. This means those poor creatureless decks would get beaten down even quicker. Luckily for us, since we're likely to be a deck with a high creature count, we get maximum benefit from the banner as almost all of our creatures will share a color with Dr. J.

Coat of Arms is another symmetrical effect for the table. While each creature on the battlefield will get a buff from Dr. Julius being on the field, Dr. J will be the biggest winner as he'll get +1/+1 for each creature of the battlefield. Our already large commander becomes super-sized. If that sounds appealing, check out Alpha Status from Scourge. Even if our opponents only have one creature each, our commander still gains double-digit power in a four-player game.

One thing I would avoid though is the more "pure" tribal support cards. Herald's Horn and Heirloom Blade are great when you're deck is full of wizards, dragons, cats, or vampires... but it's not as great when only your commander is a vampire-cat-dragon-wizard plus some.

The Creatures, They are a Changin'

Before we pull the trigger on including these tribal-neutral cards, we need to ask ourselves if it's worth it to include them based solely on our commander. The answer is mostly no, but with the inclusion of other "changelings" we can consistently benefit from these effects.

These three are our primary options going forward. Chameleon Colossus can be buffed to the stars as a singular threat, or Mirror Entity can buff the team to great heights. One notable thing about Mirror Entity is that combined with Coat of Arms each of our creatures gets +1/+1 for each creature of the board. Not much is likely to survive that kind of power. Runed Stalactite is less than ideal, but it does give us another slot and a small buff. With how few options we have, beggars can't be choosers.

End of the Evolutionary Line