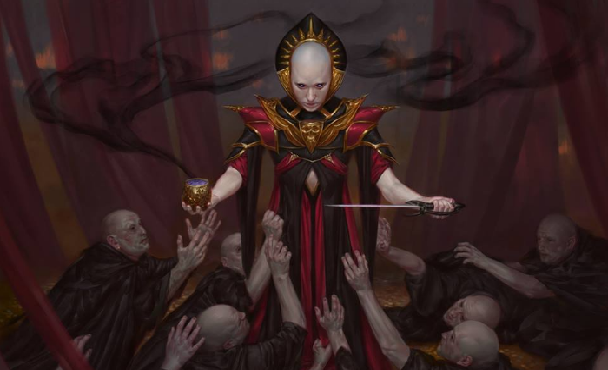 Hello, wonderful readers! I want to start off this article with a confession. I have this secret, something that may shock some of you, as it is not something I think most people would expect from me. If you cannot tell, I am stalling, because this is huge for me to finally say this out loud. But no more secrets, just the truth. Here we go:

I think black is the best color in all of Magic: the Gathering.

I know! No one would have suspected the resident Golgari (black and green) Reanimator/Graveyard Shenanigans player to be biased toward black, but the truth must ring out! I must prepare every one of you because, for today’s article, it matters. Thus far, we've gone through some great Uncommonders (legendary creatures printed at the uncommon rarity as opposed to rare or mythic rare). The series was inspired by the 20 uncommon legendary creatures printed in Dominaria, and we also decided to pay homage to the past by picking 20 previously rare commanders who have since been downshifted to uncommon. We've looked at so many amazing, strong and fun commanders like Tatyova, Benthic Druid and Zada, Hedron Grinder. This time, though, the folks on my Discord server gave four options for a Twitter poll, like I ask them to do every couple of weeks. They nominated the following:

The winner this week (by the popular vote of YOU, the people!) is one of the Dominaria legends I was the most excited to see when spoiled: Another confession I should make is that Victimize is one of my favorite black cards in all of Magic. We get to put something into the graveyard while getting something back out! While there is a downside (the revived creatures enter the battlefield tapped) we are normally getting so much value out of death and enter-the-battlefield (ETB) effects that the creatures entering tapped does not really matter. Another similar card that earns a huge amount of my love is Daretti, Scrap Savant. While this is red instead of black, the diversity of swapping living and dead artifacts - as well as artifact creatures - is just great. Plus, if we protect Daretti, he can keep swapping, unlike the one-time sorcery that is Victimize.

From Victimize to Daretti, Scrap Savant, I clearly love exchanging living and dead things. Now we have Whisper, Blood Liturgist. Wizards of the Coast (WotC) took something that I love, stuck it on a legendary creature and made it mono-black?!

I drooled over the EDHREC.com page for Whisper and built a list that I think would make a very strong “Whisper Precon” deck. Give it a look:

Before we get any further, I do want to highlight the three important differences between Whisper and Victimize. The first is that Whisper does not dictate “sacrifice two OTHER creatures” to pay for her effect. This means we can sacrifice Whisper herself, which can be useful if someone tries to target her with Darksteel Mutation or Imprisoned in the Moon. Where Victimize brings back two creatures for sacrificing one, Whisper brings back one creature by sacrificing two. The payoff for this steeper cost is twofold; first, Whisper is repeatable, and second, the revived creature comes back untapped. The reason I highlight these details after looking at the above list instead of discussing them beforehand is to shine a spotlight on cards like Abhorrent Overlord and Myr Battlesphere. These cards generate more than two tokens, meaning we can use those tokens as fodder for Whisper to bring something back. We can even sacrifice the actual creatures to get them into the graveyard, so we can bring them back for even more tokens! Either way, it is great to have options (and tons of tokens) to work with.

Speaking of Myr Battlesphere, I was shocked not to find Wurmcoil Engine on the page for Whisper! Seems to me that you could make a ton of Wurm tokens with very little effort. This got me thinking about cards like Junk Diver and Myr Retriever as well. Artifact recursion is a very strong archetype, perhaps almost as strong as Mono-Black Reanimator with the right builds, and I think we can make this one of those builds. Thus, Trading Post is a must-have for redundancy. Marionette Master can become a wincon in a deck like this, using the Fabricate trigger to put +1/+1 counters on Master instead of just making the tokens, which will ramp up the damage we deal every time Whisper sacrifices our artifact creatures. Marionette Master also complements the usual package of Zulaport Cutthroat, Blood Artist and Falkenrath Noble when we are sacrificing artifact creatures.

Since we are talking about mono-black, we should note that black does have some issues getting rid of enemy artifacts and enchantments. Luckily, cards like Spine of Ish Sah and Meteor Golem are easily recurrable in this deck, so we can systematically shut down the enemy’s support cards. Scrap Trawler is another staple of artifact decks, sitting in the “Top Cards” portion of the Artifact Theme Page on EDHREC.com. Noxious Gearhulk settles in at 1% synergy on Whisper’s recommendation page, but 9% for Artifact Theme decks. When combining Whisper’s ability with an artifact theme, we can certainly boost that synergy percentage even higher. While we are putting as many colorless cards onto the battlefield as we can manage, Blinkmoth Urn will be a great mana generator. Shout-out also to Dean, who reminded me via Twitter about the card Krark-Clan Ironworks, which basically works like Ashnod’s Altar for artifacts instead of creatures. Just think - if we want to toss Pitiless Plunderer into the mix, each creature that dies basically generates two mana, since we can use the Treasure tokens with Ironworks to make 2 colorless mana! Sounds like… value!

Using all this help from the Artifacts Theme page, here is what a new list would look like for Whisper:

Why Hit Blackjack (21) When You Can Proliferate to 10?

As a mainly Golgari-based player, I have dabbled in some pretty sketchy archetypes. One such archetype that my playgroup almost instantly regretted letting me try was the infamous strategy known as Infect. For those of you who do not know, Infect is a mechanic where damage from creatures is dealt in the form of -1/-1 counters to creatures and poison counters to players. It sounds like a good deal to get counters instead of losing life, but if a player obtains ten poison counters, they lose the game. It does not matter if their lifegain deck gave them infinite life; ten poison counters = death.

The reason I bring this archetype up is that black is one of the best colors for Infect, especially since we have access to the only legendary creature that comes with Infect printed on him: Skithiryx, the Blight Dragon. Another important mechanic to keep in mind for horrible Infect players like us is Proliferate, because once someone has been tainted by the Infect-ion, we can just keep piling poison counters onto them, even if we cannot connect with any more Infect creatures. Contagion Clasp and Contagion Engine are the main go-to cards for Proliferate in all colors, while Grim Affliction and Spread the Sickness are the only two mono-black spells with this ability. Core Prowler will wind up going to the graveyard more than once in a deck led by Whisper, and if we keep some of the artifact token makers in the deck for sacrifice fodder, Throne of Geth can get us to the promised land, too!

Of course, we need to get the poison counters rolling, so Grafted Exoskeleton and Phyresis can make any creature an Infect creature. Ichor Rats is a personal favorite of mine because it gives everyone a poison counter just for entering the battlefield. Hand of the Praetors can also help us cheat counters onto the rest of the table, just for casting our Infect creatures. We should not forget a recent new addition to the scores of Infect strategies with the release of Dominaria, the infamous Yargle, Glutton of Urborg. Casting Tainted Strike when Yargle goes unblocked is just golden.

Before Ixalan, we traveled to Amonkhet where Hapatra, Vizier of Poisons made -1/-1 counters very potent. Since Infect creatures deal damage to other creatures in the form of -1/-1 counters, we can use this as a subtheme for some good benefits. Necroskitter can steal infected creatures from our opponents, while Liliana’s Influence can lower opposing battlefields' stats and fetch out our Liliana, Death Wielder, who can snipe anything with a -1/-1 counter on it. With all these counters getting thrown out, we can use Nest of Scarabs to swarm our opponents with Insect tokens (get it? Insects… Swarm?! Ha!)

All these ideas combine into a mono-black control deck with an Infect ender. This is what the deck might look like:

Few things in Magic (see also: life) make me as happy as a good deck with a strong recursion theme to it. I enjoy thinking of our graveyard as an extension of our hand, just holding onto things until we need them. The fact that Whisper is an uncommon is insane to me. Sure, we need to sacrifice two creatures to get back one, but that just means we have more options the next turn. Building to the greatest strengths of a commander, even in unexpected ways (see also: infect) can make a deck shine and even become one of our favorite decks to pilot. I have not personally built a Whisper deck for my meta, but after writing this article, I am teeming with ideas to terrorize the table! Hopefully, this got your brewing juices flowing and you are ready to surprise your friends too. Just remember, if you want to help decide the next Uncommonder we'll discuss, join me on Discord and follow me on Twitter!
Until then, don't just drop those bomb cards, reanimate them!