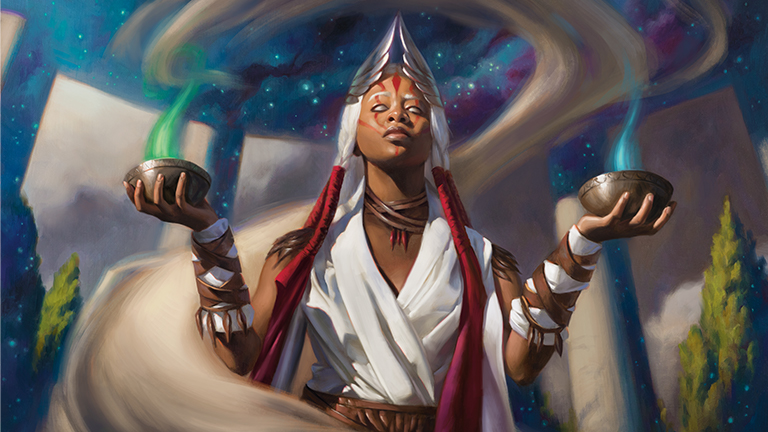 Hello, again, Commander faithful! I must get this out of the way early: it is GOOD to be back to writing about some of the coolest commanders in the format, those unique silver-rarity-stamped cards that we call Uncommonders!

That’s right, the series inspired by the twenty uncommon legendary creatures printed all the way back in Dominaria is back, with a vengeance, thanks to Replacement Commanders coming to an end for the Commander 2019 product. I should mention, however, that we may only get a few Uncommonders articles out as there is another Commander product coming out in parallel with Ikoria: Lair of Behemoths, but it seems that Wizards of the Coast has enjoyed releasing new uncommon commander-capable cards in sets more regularly, so the series will go on! Having said that, Wizards gave us plenty to work with since we put Uncommonders on hiatus, with fourteen new Uncommonders in the past couple of sets!

Throne of Eldraine gave us the five mono-colored Knights and Grumgully, the Generous, while Theros Beyond Death featured the five mono-colored Demigods with three other Uncommonders tossed in. With so many new possibilities, I had no idea which one to start with, so I asked you, the readers, via my Twitter account. I got almost thirty responses in a single day, and while it was a close running, the one card that was requested the most is our star (no pun intended) today…

I love Eutropia! I’ve come to terms with the fact that Enchantress decks fall within my wheelhouse, despite normally being my wife’s thing. Eutropia fits the bill in every way, combining a plethora of benefits into a single package. Obviously, she cares about enchantments due to her Constellation trigger, which is already well-supported by green. She hands out +1/+1 counters, which falls within the Simic identity, as precedented with commanders like Kumena, Tyrant of Orazca, Ezuri, Claw of Progress, the duo of Pir, Imaginative Rascal and Toothy, Imaginary Friend, and many others. Finally, she even grants evasion in the form of flying, something that has worked well in blue decks in the past to get that crucial game-ending damage onto our opponents!

Since we’re mentioning her color identity, Eutropia does all these different things while getting the benefit from green's ramp potential and semi-decent suite of removal and the card advantage and control characteristics of blue.

Thinking about everything, I struggled to nail down what I wanted to do with an Eutropia deck outside of “have Enchantresses, cast enchantments, hit people hard in the air” until I realized that two of the deadliest enchantments could fit into this deck. Of course, I’m referencing Eldrazi Conscription and Corrupted Conscience! With bringing together two of the most hated mechanics, Annihilator and Infect, call me Dr. Frankenstein because we are going to…

I’m sure that some people are groaning and/or rolling their eyes at seeing both Infect and Annihilator in the same deck, but, in my defense, losing out on white in the color identity means that there are fewer tutors for enchantments. This makes the deck feel “fairer”, though I do acknowledge that the amount of draw power in a deck like this will make it feel like we can basically tutor anything up by drawing into it. For the most part, I don’t think we need to cover our methods of obtaining card advantage since you’ll see all the normal Enchantress effects in the list below. I do want to highlight some of the cards that I feel are more important supportive cards for this deck since both of our key enchantments are going to be high-value targets. This is one of the major reasons I have Destiny Spinner featured, above, as it protects us against control players who may be looking to counter our more important enchantments.

Unfortunately, without white, we miss out on some of the more prominent cards that help protect our enchantments, specifically, so the next best thing is to have ways to get them back when they are removed. Eternal Witness and Regrowth are good single-target recursion effects, while Creeping Renaissance will bring back all of our favorite permanent type.

When it comes to wrath effects, decks that like Auras struggle after losing them when the creatures die. Luckily, blue has effects that bounce both creatures and the permanents attached to them! Flood of Tears, Displacement Wave and Devastation Tide are all the kinds of wraths we’re looking for, letting us replay our Auras over and over again!

Monsters From the Stars

When it comes to Enchantress decks, something I’ve become fond of doing during deck construction since the original Theros block is trying to include as many sensible enchantment creatures as I can. We get the benefits of our creatures now triggering our Enchantress effects: any protection that we play that protects enchantments will also protect our creatures, and nowadays there are some very powerful creatures printed with the starry border. The inclusion of two of the cards shown above should be obvious, but I do want to touch on the inclusion of Arasta of the Endless Web. For one, I love Arasta and think she's a fantastic new card. She brings tons of incidental value to the board, even if she only spits out a couple of Spider tokens.

There are many other great cards to talk about, though. The new Thassa, Deep-Dwelling can target other enchantment creatures to trigger our Constellation effects, while Riptide Chimera can continually bounce enchantments back to our hand to be replayed and get those same triggers back on the stack. Courser of Kruphix creates incremental ramp and life gain, while Renata, Called to the Hunt helps Eutropia’s counter game snowball even faster. Nylea’s Forerunner and Nylea, God of the Hunt both grant our field trample, which will be important when we want to get damage through to land those 10 poison counters.

I’m going to preface this part of the article with a slight disclaimer/warning: this is going to seem a little weird.

I've noticed something while looking at the EDHREC page for Eutropia, and it made me think of something that I commonly see people doing when building a deck like this. I’ve even been guilty of it myself, and it’s called tunnel vision: looking at the numbers for the cards displayed above, and even for things like Sol Ring, and comparing them to cards like Seal of Primordium, Wild Growth and Bred for the Hunt, it seems strange to see what cards are more popularly included over some well-known, tried-and-true staples. Don’t get me wrong, unique card choices are not automatically worse than staples, and I’ll never hold it against anyone for not jamming every staple card into their deck. But I have personally focused so hard on building around “the thing” that I have forgotten that not everything has to tie directly into “the thing” with my card selections.

For instance, Reality Shift is only in 12% of Eutropia decks at the time of writing this article. It’s a great removal spell in decks that aren’t running the best color for removal (white), but people seem to be running so many variations of Imprisoned in the Moon, which appears in 35% of decks. Nearly three times as many! Again, finding unique ways to get Constellation triggers is just fine, but hopefully we aren’t doing it at the cost of efficiency in our deck. (Of course, if your deck is a thematic/flavorful build, ignore this section completely and enjoy your referencing-making throughout the game!)

Having said all of that, I do mix in my fair share of support cards that I feel do the best job, and the list pops out looking something like this:

Quick disclaimer: I know that someone taking a quick glance at the numbers for each section is going to make them say, “Wait, why are there only 15 enchantments in this enchantment-based deck?!” but a closer look will show that 12 of the creatures are also enchantments! This means that over a quarter of the deck is enchantments, which I still think is a touch low for this kind of deck, but definitely better than only 15!

Let me tell all of you fantastic readers: this one was hard to write. Not because of the Uncommonder, or even because I had been writing Replacement Commanders for so long. Truth be told, things got a little crazy in “The Real World”™, the week I was writing this. Everything going on with the world, kids getting sick, me getting sick, work stuff… But we pulled through! And we made it! However, it did make me think about some things, so I wanted to take this time to just truly say thank you to everyone who continues to read these articles, reply in the comments and motivate myself and the other writers here on EDHREC to keep doing what we’re doing. I hope everyone out there is staying clean and safe and that we see the light at the end of this tunnel soon. I’m looking forward to a few more Uncommonder articles before jumping right back into 2020’s early Commander product, but until then…