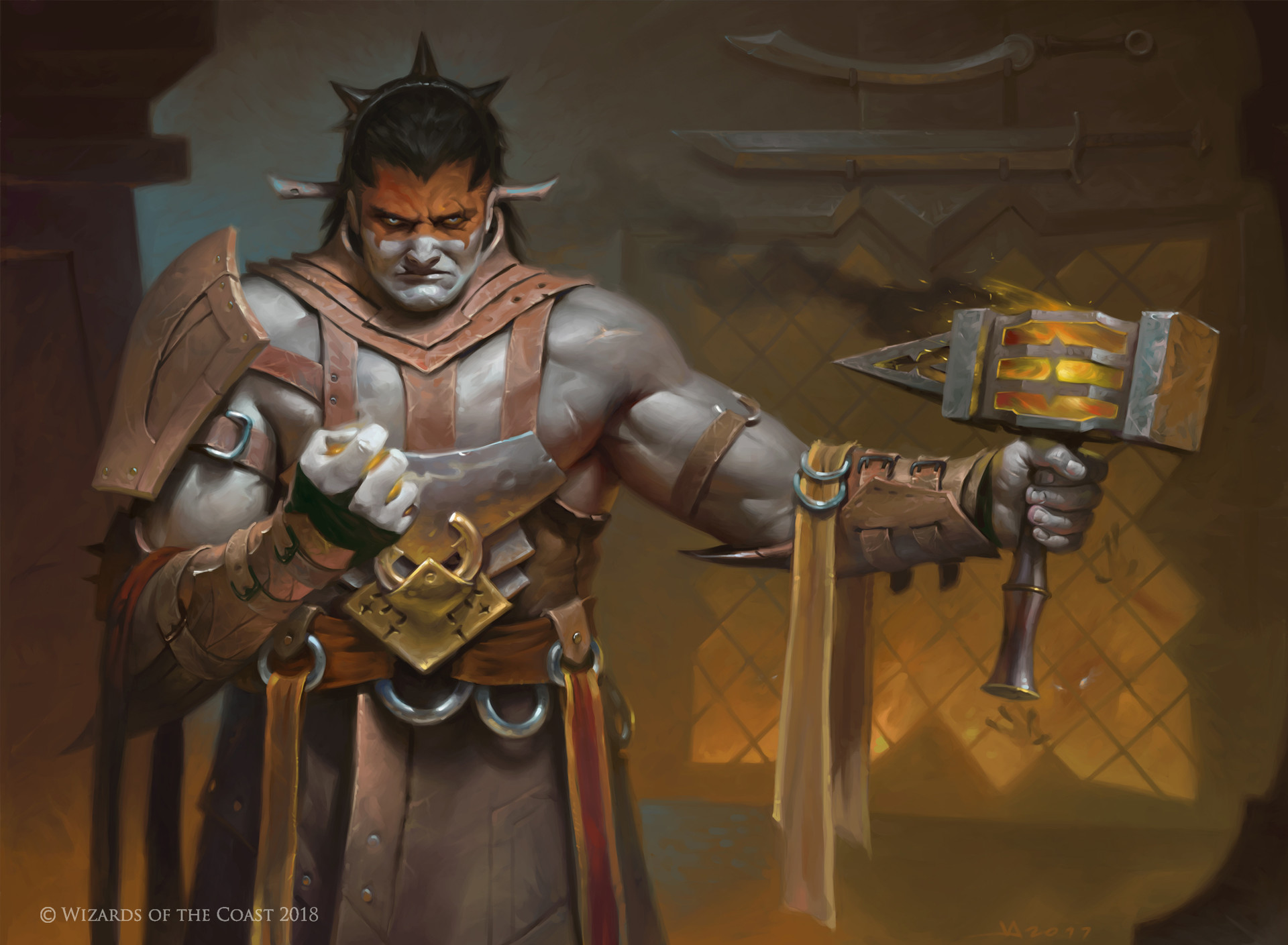 Hmm? Article? What do you mean arti- Oh, THOSE articles! Hello again, beloved readers! My name is Seth “DM” Cross and you guessed it; this is another installment of Uncommonder. This series was originally inspired by the fact that Dominaria came fully equipped twenty legendary creatures (also commonly referred to as commanders or generals in this great format of ours) printed with a silver rarity stamp. The series also touches on previously printed uncommon commanders or previously rare commanders that were shifted down to uncommon at some point in their history, such as the star of the last installment, Zada, Hedron Grinder. However, since last time we talked about an older commander, it is time to revert to covering that new hotness, the Dominaria (Dominarian? Dominarias?) uncommon legendary creatures. Like normal, I put up a Twitter poll to see what everyone wanted me to talk about, after getting the poll options by asking the folks on my Discord server. The results were close, but winning over everyone's favorite Value Fish is the star for today, the one and only…

Valduk, Keeper of the Flame Wow. I may need a second because this guy… he gets me. You may remember me mentioning that I have an “infinite goblin combo” deck lead by my favorite Goblin in the game, Krenko, Mob Boss and some of the more fun ways to win is going wide with infinite goblin tokens and swarming my enemies with hundreds of fanatical, dagger-wielding, adorable little monsters. While Valduk lacks the capability to go off and making infinite tokens, he still speaks to me in the same way that Krenko does. Right when I first saw him during Dominaria preseason, I could already guess what kinds of cards would show up in his EDHREC “signature” and “top” card fields. Purphoros, God of the Forge (or God of making tokens hurt people just for existing), Impact Tremors, Ogre Battledriver, Goblin Bombardment, Warstorm Surge, and since the Elemental tokens have just one toughness, maybe a Skullclamp? Unlike the first article of this series, we have data to look at and pool into a precon list, so let us see how close I got:

Well, then. Like I said, I know my token strategies! Still, looking at the list, Valduk suffers from a few of the same issues that Zada, Hedron Grinder did, which I pointed out last time. Both are very linear in what they want to do and that makes them both easy to predict and then easy to disrupt. One big way to disrupt both commanders is to simply keep them off the battlefield, which means there needs to be redundancy or alternative win conditions built into the deck to keep from getting easily beat out of the game just because we are building out our engine and army. So let us switch things up a bit and surprise our friends at the table with… MILL?!

Okay, wait...hold on. I know, most of us would not look at a mono-red token making commander and think “Oh yeah, we are going to deck some folks out!” That is exactly the reason we can build it and get away with it. For starters, we are going to want to keep in a few key pieces from our EDHREC list. Impact Tremors, Warstorm Surge and Purphoros, God of the Forge will deal damage and we can turn that damage into cards in our opponents' graveyards with the helps of Mindcrank and then the tokens coming onto the battlefield will do it themselves thanks to Altar of the Brood and even Altar of Dementia before they exile out. Mesmeric Orb seems to work in our favor, since even if we cannot sacrifice the Elementals, they get exiled at the end of our turn and we only need to untap with our one creature, our commander. Of course, we cannot get tokens without equipment, so we can find room for Sword of Body and Mind and Trepanation Blade. Fireshrieker makes the cut to stay in, since the double damage can mill via the Mindcrank effect. Most of the other equipment can also stay in, either because they have a very beneficial, supportive effect (like Sword of the Animist getting us some ramp in mono-red) or because they are just a great way to make more tokens (like how we can make more and more Bloodforged Battle-Axes to keep equipping to Valduk) to fuel the mill machine. Line it all up, stick it in a list and this is what we would get:

With the list above, the strategy still seems to hang on Valduk being on the field and being equipped. The second we reveal our commander, people are going to be expecting that because, well, that is what Valduk wants to do as a single card. We should not be surprised when Valduk eats a removal spell or two the first few times we try to untap with anything attached to him. How do we work around this? Well… We stop worrying about Valduk to play the game.

Way back in my Replacement Commanders series, right after Commander 2017 was revealed and released, I talked about the concept of “hidden commanders”, cards that sit in the 99 but are the real engine while we mislead the table with whatever card we have in the command zone. One of the fun parts about doing a hidden commander (aside from the look of shock people give you when they realize they have been worried about the wrong thing the entire time) is that sometimes you can hide a legendary creature that only has access to certain colors on their own in a deck with a little bit more. I brewed a deck like this once upon a time when Omnath, Locus of Rage was the bomb card in my Kynaios and Tiro of Meletis four-color Elemental deck. Sure, the deck worked great with K&T at the helm, giving me card advantage and land ramp combined with a few landfall cards, but when Omnath hit the field, the deck truly kicked it up a notch. The most fun way I ever closed out a game was kicking Rite of Replication, targeting Omnath and having to sacrifice the clones and getting multiplicative triggers of an Elemental dying, shooting the table for tons of damage!

Valduk, Herald of the Silver Golem? Valduk is a deck that wants as many equipments as possible and everyone is going to think we need to attach them to Valduk. But what if… they just grew legs and smacked our opponents around? How do we manage that? Well, Karn, Silver Golem has been turning noncreature artifacts into artifact creatures for years, so just imagine what kind of craziness we could accomplish! In general, the deck would be built very differently. Since we are not as worried about Valduk making tokens, we can scrap the “ETB damage” effects for some more supportive cards for an artifact deck. Since we have access to red, Bosh, Iron Golem can let us throw rocks at our enemies, while Pia's Revolution is almost like an Athreos, God of the Dead effect for artifacts, while vehicles like Conqueror's Galleon are even stronger since they do not need to be crewed if Karn turns them into creatures. We need mana to fuel Karn's ability activation cost, so Blinkmoth Urn and the Basalt Monolith + Rings of Brighthearth infinite colorless mana combo will put in work for the deck. Even though Commander has not changed to allow Planeswalkers as commanders, we can still put them in the deck, so why not Ugin, Spirit Dragon and Karn, Scion of Urza? This is what I think the list would look like:

If you have read any of my other articles, you know I thoroughly enjoy thinking of ways to make people look at a commander and think “Wait… What are you doing?” Something I enjoy even more than that, though, is brewing fun decks with friends. One of my favorite decks I have ever played (almost as much as I enjoy piloting Krenko) was my Marchesa, the Black Rose Grixis Vampire deck that I built with my best friend John. Because of how linear Valduk appears at first glance, I struggled to find those fun little alternatives with him until the folks on my Discord helped me out and, like how Zada's article turned out, this is easily one of the most fun builds I have thought up in a long time. Have you ever been stuck on a build or feel like you do not know how to build something new? If so, let me know in the comments below! I would love to hear of similar stories to mine.

Until I see you next time, you know what to do! Top-deck all the bombs!