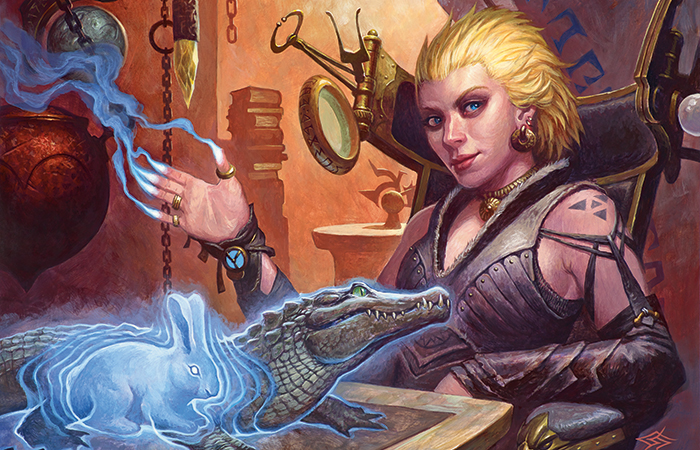 We are back again, faithful readers! My name is still Seth Cross (but my friends call me “DM”) and this is still Uncommonder, the series inspired by Dominaria’s plethora of legendary creatures printed at the uncommon rarity. There were twenty of the silver-stamped Commander options that Wizards of the Coast gave us to brew around, and they join the ranks of fifty-eight other Uncommonders from previous sets.

To celebrate how awesome Dominaria was for giving us these silver generals, we stated at the beginning of this series that we would look at all twenty Dominaria Uncommonders and even twenty of the previous Uncommonders, including legendary creatures that were initially at rare or mythic and have been downshifted over time to uncommon. So far, we have covered Zada, Hedron Grinder and Iwamori of the Open Fist. Since we looked at Tatyova, Benthic Druid last week, this week we are going old-school once again! I asked the fine members of my Discord server to give me four options from the list and then put up a Twitter poll to see what you, the people, wanted me to try to bend and break! This week, the poll was between Sosuke, Son of Seshiro, Radiant, Archangel, Nagao, Bound by Honor, and this week’s winner… There are a few important factors I want to point out about Jalira, just so that we fully understand how the commander works. First, her ability requires her to tap, so untap shenanigans (such as Master Puppeteer) are a definite possibility. Second, her ability requires her to sacrifice another creature, so she cannot sacrifice herself to her own ability. This is not anything extremely detrimental to Jalira’s power level, but it is important to note. If anyone tries to target Jalira with a spell, we cannot use her ability to save her from being stolen or in response to a removal spell. Third, her ability states that the “found” card must be nonlegendary. This means we cannot turn a token into an Emrakul, the Promised End like the infamous Baral, Chief of Compliance “Polymorph Emrakul” deck that dominated 1v1 Commander when Wizards created that variant of the format.

Fourth, the sacrificed creature does not have to be nontoken, so that gives us a bit of room to play with certain powerful cards like Talrand, Sky Summoner. Creating tokens gives us fodder to dig the other cool creatures out of our deck. The fifth and final detail we want to take notice of is that Jalira’s ability does not state we cast the creature spell, we merely put it into play. While that sounds great (because it means we do not have to pay costs) it does create a 'nonbo' synergy with some cards that measure on-cast triggers, such as the new Sai, Master Thopterist.

I think that's everything we need to remember about Jalira. Let us turn to her EDHREC page and look for the highest-percentage synergy cards so we can start with a “Precon” Average Decklist for her. From there, we'll look at some possible niche strategies and think about making Jalira in some fun and unexpected ways. This is what the EDHREC Precon list might look like:

One thing I noticed when looking through the list was the distinct lack of legendary creatures. It makes sense, since Jalira’s ability cannot find legendary creatures, but it also made me appreciate the few that we are running, as their abilities had to synergize even more than normal to warrant the spot in the deck. For instance, the powerful Baral, Chief of Compliance is left out of the deck because his ability does not sync well with Jalira, but Meloku the Clouded Mirror and Talrand, Sky Summoner give us tokens that we can use as Jalira fuel. Speaking of tokens, I also think it could be clever to target our own creatures with something like Pongify or Rapid Hybridization if an opponent tries to exile one of our minions. We still lose our creature, but it goes to our graveyard instead of the exile zone and we replace it with a token that Jalira can later turn into something else! Clever!

One of the first things I notice when I look at the EDHREC Precon-style list is that there are quite a few artifact creatures. This makes sense, as some of them tend to have interesting death triggers (looking at you, Wurmcoil Engine, not to mention everyone’s favorite, Solemn Simulacrum). These give us added value to sacrificing our creatures to find other creatures. Even better, artifact strategies tend to come with some recursion thanks to cards like Junk Diver, Myr Retriever, and another all-star that even makes tokens, Trading Post.

One of my favorite things about this kind of deck is that I can easily justify putting Sai, Master Thopterist into the list for many of the same reasons as Talrand: tokens! Because this list wants a critical mass of artifacts, I think the synergy percentages of certain cards increase. Support cards like Caged Sun work even better, while another new card from M19, Tezzeret, Artifice Master, fits nicely into the list. Sharding Sphinx can make an army seemingly out of nowhere, and with enough artifact recursion, Myr Battlesphere can churn out tokens constantly.

Card advantage is a staple of the blue portion of the color pie, so it should come as no surprise that the deck will most likely draw quite a few cards. The new One with the Machine seems like fun for an artifact-based deck, especially since we will want to run high-cost cards like Darksteel Colossus and Blightsteel Colossus (if we truly enjoy making our friends hate us, anyway). If we cast that spell with our Colossi in play, that will be quite a large draw spell. I also enjoy the trick of activating Jalira tosacrifice Mulldrifter in response to the Evoke trigger. This turns the Mulldrifter you were going to lose anyway into another brand new creature. The value!

This is how I would build Jalira with an artifact focus. I used the Artifact Theme page from EDHREC to find things that did not appear on Jalira’s page, which helped me create the following:

Under the Sea with Jalira's Fishy Friends!

Most of the highest-synergy cards for Jalira make tokens. One of them catches my eye because I used to love running it in my old Grimgrin, Corpse-Born Tribal Zombie deck: Reef Worm. This card is interesting because we get more and more value every time we sacrifice it and its tokens, until we wind up with a huge 9/9 Kraken. I have played against decks with some very fun themes, and one of them was a friend’s Thassa, God of the Sea 'Sea Creature Tribal' deck, filled with Crabs, Octopi, Krakens, and more. Another Uncommonder that this series will eventually cover from Dominaria is Slinn Voda, the Rising Deep, which seems like a match made in heaven for this kind of “tribal” synergy.

I also noticed Chasm Skulker had a high synergy percentage on Jalira’s recommendations, and I knew we could make quite a splash (haha!) with the creatures of the deep! I wanted to start with some of the biggest and baddest creatures in the deep blue (I did not originally mean to make that joke, but there we go) so naturally, Krakens are priority number one. There are eleven mono-blue Krakens in the game if we count Awoken Horror, the flip side of Thing in the Ice. Since Awoken Horror has a mass bounce effect, I think it can keep the honorary include. I included seven of these Krakens; three just did not seem great, even in a fun deck like this, and Tromokratis is a legendary creature and therefore a nonbo with Jalira’s ability.

With a focus on sea creatures, Whelming Wave seems like a great control card, since we'll keep our biggest creatures while bouncing the rest. I once locked a game up for several turns with Wave and Archaeomancer, so we can definitely include that synergy to keep our big fish dominant. We run a bit of a risk adding a card like Breaching Leviathan because we might accidentally pull it onto the field with Jalira and miss out on the mass tap effect, but I think there is enough value to try it out. Toss in some card draw and mana rocks and we get a list that looks like this:

The more I write about these uncommon Commanders, the more I fall in love with them. This article flowed easily (like water? Ha!) and I think that speaks to how well-designed Jalira is as a legendary creature. As the game continues to evolve with new sets, mechanics, and overall new power levels, I do understand Jalira's shift from rare to uncommon. With that said, I do not think Jalira or her fellow downshifted-to-uncommon colleague Zada, Hedron Grinder are unplayable, and I look forward to bringing you more fun ways to bend and break these kinds of Silver Saviors. I would like to offer a quick shout out to the folks on my Discord server for helping with the options for the polls and the folks who follow me on Twitter for making the decision (so I do not have to!) Feel free to follow me there or join the Discord if you want to help, too!

Until next time, drop those big (fishy) bombs!