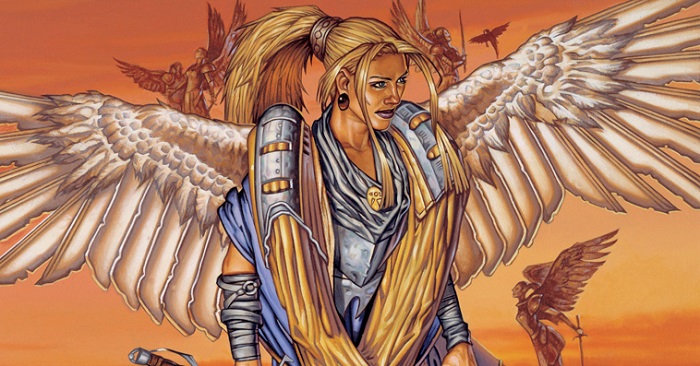 Radiant as the Sun

Hello again, friends and readers! My name is Seth Cross, but you can call me DM, and I am very excited to bring you another installment of Uncommonders! This series was inspired by the 20 legendary creatures from Dominaria printed at the uncommon rarity, as opposed to the usual rare or mythic rare. With a quick Scryfall search, we can see that there are a total of 78 uncommon legends with a silver stamp. Some of these Uncommonders did not start out at uncommon, but were downshifted over the years, most likely due to the rising power level of legendary creatures as more sets are released. So far we've looked at Jalira, Master Polymorphist, Zada, Hedron Grinder, and Bladewing the Risen as our rarity-shifted Uncommonders, and this week we're going to look at another one!

Before we get to the center of our attention today, I just want to remind you that you can help shape what Uncommonder we talk about each week. How, you ask? The people on my Praetor Magic Discord server give me four different ideas for the week, which I then make into a Twitter poll for the Monday to Wednesday following the release of these articles. By joining the server and following me on Twitter, you can double up on your chances to influence what I write about next! So, I hope to see you in chat and on the Blue Bird™!

Shameless plugs aside, let us get down to why we are here today. What is this article's Uncommonder, you ask? This one is extra special because it was suggested both in last article's Disqus and Reddit comments! Someone on Discord put it up for the poll and it WON! We are going mono-white in the air with... Like I mentioned, Radiant was originally printed as a rare back in Urza's Legacy, all the way back when legendary creatures were classified as “summon legends.” At first glance, it can be easy to see why Radiant was shifted down to uncommon. Five mana for a 3/3 flying and vigilant Angel does not seem like the best exchange rate. One of my first thoughts was that Radiant would sit in the command zone of tribal Angel decks, and looking at her EDHREC.com page for ideas, I think I might be right. However, I did notice something on the page that struck me as odd. EDHREC.com typically puts the “New Cards” portion of each commander as the first section, most likely to draw attention to the fact that there are new synergies and strategies to play with legendary creatures that have been around for a while. With Radiant, there is no “New Cards” section, meaning people probably have not been updating their lists on the sites that EDHREC.com gathers data from. We saw this once in the series when we looked at Bladewing the Risen and we dedicated the article to brewing decks that would best utilize new cards that have been printed in the past few sets. Since the two situations are similar, we are going to do the same thing and give Radiant, Archangel an upgrade!

The Archangel of Now…

To fully understand how to upgrade Radiant, we need to understand how people are building her now. Sure, we know that the deck looks like tribal Angels, but it is surprising how little that narrows the deck down due to how many Angel creatures have been printed over the years: We also should realize that most Angel creatures tend to be expensive in terms of converted mana cost, and mono-white is notorious for having trouble ramping up and drawing cards to keep the pressure on opponents. For the sake of this list, I am going to conform very closely to the EDHREC.com page’s distribution of card types as well, to really get a good picture of how people are currently building the deck.

Looking at creatures, we want to set the curve in a good position, so I looked for creatures that spread out across different converted mana costs. Emeria Angel is a “Signature Card” for a reason. It has decent statistics for the mana cost, and it grows our commander by playing lands to get flying Bird tokens. Herald of War will help us cast our more expensive Angels, while Archangel of Tithes should deter some attacks from coming in our direction. Creature-based strategies can easily be disrupted by Grave Pact effects that cause us to sacrifice our expensive creatures (which are normally taken advantage of with sacrifice outlets like Ashnod’s Altar), so Angel of Jubilation can slow these kinds of decks down. Mono-white has several powerful keywords associated with it, such as flying, but vigiliance is another such effect. This means Angelic Field Marshal can pump our field while also giving us more freedom to attack and keep up blockers when Radiant is on the battlefield. Our commander should naturally be boosted due to the “+1/+1 per flying creature on our field” static ability she has, so alpha-striking someone with commander damage should not be difficult. We can facilitate it with Sublime Archangel, since Exalted abilities stack when they are spread out across different creatures.

With so few instants and sorcery slots (five and six, respectively) I think we need to focus on removal, since there are not many ramp or draw spells in our single color. I will mention Tithe, though, since it is a way to ramp in mono-white if we are behind in land drops, which may not be uncommon. Outside of that, Condemn, Return to Dust, Path to Exile, and Swords to Plowshares will permanently get rid of key parts of our opponents' fields.

For sorcery spells, we want to be able to wipe the field whenever we are not in control. Mass Calcify and Austere Command give us the options to maybe keep some of our field around, while Rout can be cast at instant speed. Terminus and Descend upon the Sinful are answers for indestructible creatures and we cannot go wrong with a good ol' fashioned Wrath of God to round out the Wrath effects.

Artifacts for this deck seemed to be focused on ramp effects via Caged Sun, Extraplanar Lens, Gauntlet of Power, and even Urza's Incubator naming Angels. Enchantments were originally focused more on anthem effects like Crusade, but I looked through the page and focused on more diverse effects, including taxing our opponents with Ghostly Prison and Aura of Silence. I also took Land Tax to try to get as much mana consistency as possible into the list. In the end, this is what I think a current list would look like:

Vs. the Archangel of the Future!

I reviewed the page a few times and it looks like the most recent cards there were from Amonkhet and Hour of Devastation. That seems understandable since Ixalan did not have a plethora of high-value flying white creatures outside of Zetalpa, Primal Dawn and a few other forgettable flying Dinosaurs. Battlebond gave us almost nothing exciting for Radiant, but Dominaria was great for the Archangel! As I foreshadowed earlier in the article, Lyra Dawnbringer makes our Angels even better and I really like the feel of Teshar, Ancestor’s Apostle if we look at more value flying legendary creatures and three-drop creatures. This is also going to cause us to lean more on artifacts and artifact creatures, since they are "historic" cards as well as legendary cards.

I also noted that Anointed Procession from the EDHREC.com page and decided that 1/1 Bird and Spirit tokens were just as good as any Angel, and investigated other generators for those tokens. This gave me the idea to run cards like Custodi Soulbinders, Twilight Drover, and Spirit Bonds. Field of Souls seemed like it could synergize well with Teshar, recurring our creatures and the three-cost-based effect from Teshar gives me an excuse to run a favorite of mine, Bygone Bishop. Clue tokens count as card advantage, and they work with Anointed Procession as well!

Since I mentioned Teshar for bringing back creatures and Procession for making multiple tokens, I think Desecrated Tomb might work out really well, despite the fact that it makes black Bat tokens. Remember, because the black mana symbol does not appear on the card, its color identity is still colorless, so it still fits in the deck. I also added a "guilty pleasure" card in the form of Ancestor Dragon, which is not amazingly powerful, but the art is beautiful and it does help us gain life to stay alive in the game. Oketra's Monument will discount our white creatures' mana cost while also giving us some defenses on the ground, and also synergizing with Procession and even Ancestor Dragon's lifegain if we attack with them. Finally, after tossing in Sun Titan for less limited recursion (since it can hit more than just creatures) and Odric, Lunarch Marshal to give everything on our field flying, this is the list I came up with:

When I wrote about upgrading Bladewing, the overall theme of the deck stayed the same. We still wanted to play and recur Dragons, because that is what Bladewing does. Radiant is a little more open because she does not name a specific creature type, just a keyword. I remember the first time I saw Odric, Lunarch Marshal and thought that 'keyword tribal' would be an awesome idea. Kwende, Pride of Femeref was another iteration of keyword-reliant strategies and I was sad that I could not justify adding him into the deck just to build onto the idea. Still, I have good memories of sitting down at the table with one of my earlier decks led by Stonebrow, Krosan Hero, which had nothing but creatures with trample or trample enabling spells, and having a great game. It makes you think about deckbuilding in another way, which I think is healthy for the meta and the format.

Have you ever built a deck based on a keyword? Did it work out for you or did you find it to be lackluster? Tell me about it in the comments below and do not forget to join the Praetor Magic Discord server and follow me on Twitter so that you can help me decide the next Uncommonder!

Until then, keep droppin' bombs on the battlefield!