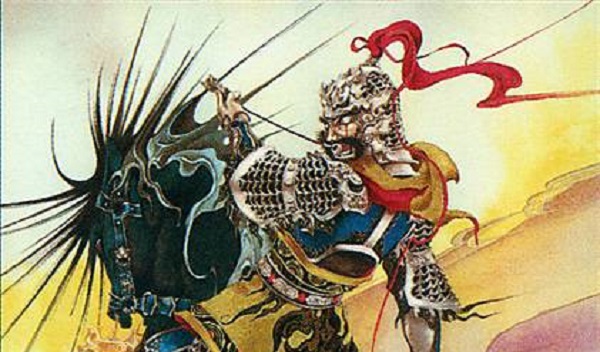 Hello again, friends! My name is Seth Cross, and welcome back to Uncommonders, the series that explores underappreciated commanders printed at the uncommon level. Though this series started with Dominaria's twenty uncommon legends, I also wanted to include older Uncommonders, as well as rares that were downshifted in rarity, to see how brand new cards affect those uncommon legends and make them more powerful.

As a Golgari and generally mono-black player, one of the most exciting new cards from War of the Spark is Bolas’s Citadel, with all its delicious combo potential. Looking through all the pre-Dominaria Uncommonders, I noticed an Uncommonder that can run Citadel with ease. Of course, I'm talking about...

Xiahou is a unique commander due to the wording of the printed ability and the fact that Horsemanship is a fairly rare mechanic. Since the card does not have reminder text, Horsemanship means “this creature can’t be blocked except by creatures with Horsemanship.” Basically, a different version of flying.

Xiahou’s other ability is unique because of the timing restrictions (pre-combat main phase only) and that it retrieves from your graveyard any black card, not just a creature. This enables a few interesting strategies, but for us, it can act as recursion for Bolas's Citadel, since it is a black card instead of a regular colorless artifact. This gives us the ability to play some cool spells, then play them again and again.

Normally, Xiahou is built with powerful black instants and sorceries - a card type mono-black cannot regularly recur. I'd like to break that tradition, though. There are only a few key cards he needs to recur, namely that precious, precious Citadel. Let's lean into that Citadel synergy - instead of building an instant and sorcery Xiahou Dun deck, we're building a mono-black artifact master.

To properly build around Bolas's Citadel, let's see what cards are most often paired with it. Looking at the artifact's main EDHREC page, I was not at all surprised to see Aetherflux Reservoir as part of the Signature Cards and Sensei’s Divining Top in the Top Cards. While Citadel lets us play the first land that winds up on top of our deck, we cannot be expected to have too many extra land drops without green in the deck. Top helps us move them away and keep the combo going. Reservoir’s lifegain keeps us alive as we start to combo off, since we will be paying life to play cards from our deck.

Both Reservoir and Citadel are very dangerous cards to see on the battlefield, and will attract removal spells. Xiahou can retrieve Citadel, and artifacts can often be recurred by other artifacts, though we should be wary of exile effects like Return to Dust. We'd much prefer our artifacts end up in the graveyard than in exile, so to guarantee our artifacts don't go away forever, we'll include some sacrifice outlets, to make sure we can recur those artifacts if we need to. Trading Post is a staple in artifact-based decks because it can both sacrifice and recur our important pieces. Krark-Clan Ironworks gives us an instant-speed sacrifice to generate mana. The other two options I like for the deck are Claws of Gix, which has recently seen some love on Commander Vs, and Syndicate Trafficker, a more recent addition to the package.

Unfortunately, mono-black has few options to return artifacts from the graveyard when those artifacts are not creatures. By few of course, we mean next to none. The only ones I know of are Beacon of Unrest and Fortuitous Find. The latter isn't very impressive, and though the former is nice enough for recursion, it doesn't synergize with Xiahou's ability, since it shuffles back into the library.

We can therefore facilitate our recursion by running the staples like Myr Retriever, Junk Diver, Buried Ruin, and depending on how artifact-heavy the list becomes, maybe Scrap Trawler. The idea of making Treasure tokens and sacrificing them to the aforementioned Ironworks is too much fun to not include, so you may notice both Pitiless Plunderer and Revel in Riches in the deck, too. Then, since we are looking at sacrificing some Treasure tokens, I cannot resist running my favorite card from all of Kaladesh block, Marionette Master.

Cheating on Your Taxes

A quick disclaimer: this section is about cheating on your commander tax! Do not cheat on your real taxes! You have been warned!

Xiahou does not suffer from the problem experienced by other commanders with "dies" triggers, such as Elenda, the Dusk Rose. With his updated oracle text, he can sacrifice himself to his own ability, be replaced into the command zone, and still return a black card to your hand. This is a cool advantage to have, but it will increase commander tax. Let's look at ways to avoid increased commander tax; since mono-black is the color of recursion, we have many options.

I am always an advocate of repeatable effects, so Volrath’s Stronghold is great for the deck. It is doubly synergistic because, with Citadel out, we can pay four life to replay Xiahou, potentially getting back multiple cards in one turn! Another repeatable effect is Palace Siege, naming 'Khans' to return creatures, though funny enough, Xiahou can also return this enchantment if need be! Victimize is not normally a repeatable effect, but with Xiahou’s ability and enough mana, we can keep looping the spell for maximum value. Helm of the Host seems to be good in any deck that runs it, and this is no exception. Making nonlegendary copies of Xiahou to recur spells is pure value. Then there's Phyrexian Reclamation, also repeatable recursion, and Mimic Vat, which can help us make Xiahou copies once a turn.

NOTE: It is important to be careful with Vat. If Xiahou is exiled under it and Vat is destroyed, there is no way to return him to the command zone. Make sure you have some creature sacrifice outlets that you can activate to push Xiahou back into the graveyard if someone goes to remove Vat. For the most part, sacrifice outlets that act as mana abilities (Phyrexian Altar or Ashnod’s Altar for example) are best, to avoid the green player’s Krosan Grip.

For the sake of safety, I do like have a safety button or two when it comes to putting my commander in the graveyard. If someone goes to disrupt your recursion, and Xiahou winds up stuck in the graveyard, things can get rough. In these instances, exiling Xiahou and putting him into the command zone via replacement effect might be the only answer. Relic of Progenitus is one such example. Whip of Erebos is another good option, because we can still sacrifice Xiahou before he gets exiled at the end of turn. I also enjoy Perpetual Timepiece to shuffle our graveyard back into our deck, also triggering a commander replacement effect when Xiahou would change zones. While this may take away some of our options for Xiahou later, the ends justify the means if we need our commander back. It also doubles up on value if Citadel is on the battlefield, and we need to shave a couple of lands off the top of our library (plus, any black cards we mill are great targets for Xiahou later)!

Throw in a couple Wrath effects (I count Living Death as the first one), some removal, ramp and card advantage (especially anything that is black that Xiahou can recur) and the list might look something like this:

For this deck, the commander is mostly a facilitator for Bolas's Citadel in the 99. Paying life instead of mana is extremely powerful in Magic, so I'm happy to build around what is easily one of my favorite cards from War of the Spark. This take isn't necessarily mainstream for Xiahou - playing a support role rather than the leading role - but it is interesting space to explore.

Hello my friend! I have a [[Xiahou Dun, the One-Eyed]] edh deck, and it's super flexible!! Also, he has horsemanship, which is pseudo-unblockable, and black has a ton of ways to buff him by sacrificing your own creatures.

They went more in-depth with their response and you can read the rest of it by clicking here. We can get inspired by so many different aspects of the game, including someone else’s ideas or basic concepts, and that is awesome to see. When brewing decks, try to surround yourself with those personalities, to bounce ideas around and come up with something new and cool!

Of course, if you want to bounce ideas for decks with me or just talk about Commander or Magic in general with me, make sure you are following me on Twitter. I am also a part of the Praetor Magic group, where we make YouTube videos every month, perform a live Podcast Twitch stream as well as gameplay streams every week and host a public Discord server dedicated to bringing people together over the idea of cheap Commander games! I hope to see you out there and until next time, you know what to do;

Keep reanimating those bombs! (Because casting them just once is never enough!)