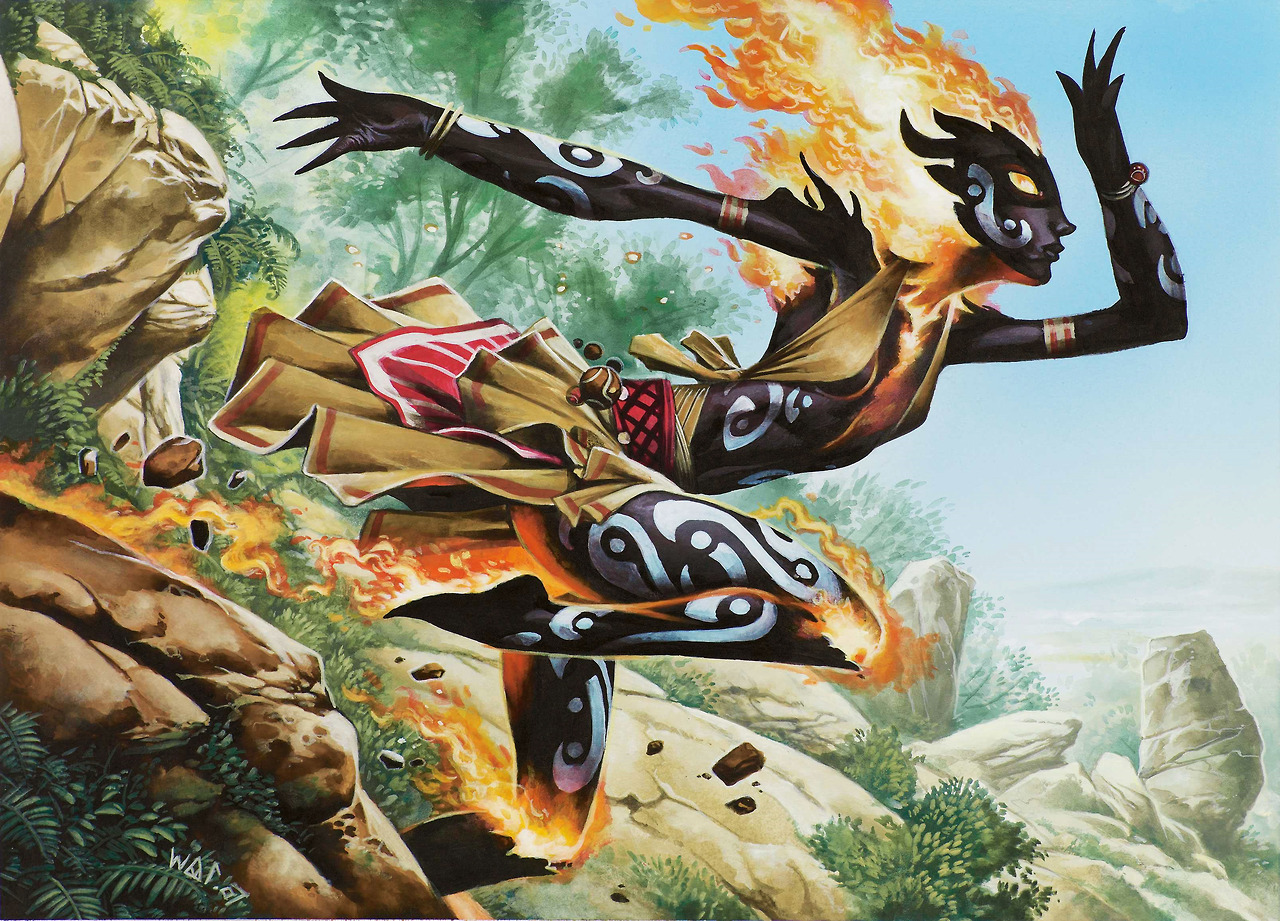 This article is Round 11 of the Underdog’s Corner, a series spotlighting various lesser-used commanders and their place in the format. Each article makes the argument for a single commander that deserves more play, as well as highlighting key cards and synergies.

I Got 99 Mountains, but Ashling Ain't One

Welcome back to the Underdog's Corner! Last week, we passed a milestone by moving into the double-digit article count! So, before moving on, I would like to thank everyone who has taken time to read any of the previous articles as well as you, current reader! Your feedback and support have been invaluable, and I hope to continue this series for a very long time.

Red is the color of creativity, passion, and freedom, but it is also the color most suited to burn everything in sight. Fire is all-consuming, a destructive force that can't be controlled. This week, we look at a commander that wholly embodies this principle. Hailing from the plane of Lorwyn and weighing in at three and a half satchels of soot, she is our resident flamekin legend and our newest entrant in our series: Ashling the Pilgrim!

Ashling the Pilgrim comes in as the 8th most-played mono-red general, and she is the second most played if we look at commanders whose abilities deal with damaging opponents, falling behind the mighty Purphoros, God of the Forge. Additionally, her abilities place her near another two generals who deal with damaging opponents: Heartless Hidetsugu and Chandra, Fire of Kaladesh. So what separates our familiar flamekin from the others?

For those that may remember, I love low-cost commanders. I love having the ability to cast my commander early and often when they die, and looking at Ashling's text... that may be happening often.

Outside of reminder text, we don't often see the word "resolves" on a magic card. If I did my search correctly, there are only around five cards that do and three of those came from Lorwyn. Ashling is one of those few. Whenever her ability resolves for the third time in a turn, Ashling explodes, dealing damage to everything near her. Your creatures, my creatures, your life total, my life total, and Ashling are all going to be taking damage. It doesn't matter if we have eighteen copies of the ability on the stack, as soon as the third one resolves: Kaboom. At minimum we're going to be dealing 3 damage to everything and everyone, but if we load up Ashling with more counters over the course of several turns, she turns into a ticking time bomb. One of my favorite things that you can do with EDHREC, and one that I've started to use more, is seeing what decks play a given card the most. For example, if we search for Unspeakable Symbol, we find it is by far played mostly in Marchesa, the Black Rose. This feature lets us find homes for our "pet cards." I'll admit I shamelessly chose to cover Ashling the Pilgrim because she is home to two of my pet cards.

Braid of Fire is a mana-producing enchantment from Coldsnap that adds more and more mana as the game goes on. There seems to be little downside to this other than the mana only existing during your upkeep. However, this was back when mana burn existed, and the risk vs. reward was more tangible. The created mana from Braid lets us pump Ashling on our turn while saving our lands for out-of-turn activations, casting spells, or other sorcery-speed necessities. I have never found a permanent home for this card, but the prospect and combination with my other pet card may push me to make Ashling a reality.

In this series' very first article I shared that I love weird, interesting, and unique mechanics. I take great joy in making these types of abilities work, and I name dropped a very specific card that I'm finally coming back to: Obsidian Fireheart. This is one of my favorite cards in all of Magic: The Gathering. It's not the strongest card, and it's not mana-efficient, but to me it is a very fun card. We pump mana into our elemental, and it translates to damage for the rest of the game. Even if we lose, we can still win! The counters stay on the lands regardless if Fireheart is on the board or if its controller gets knocked out of the game. As a game goes longer, if we're able to put blaze counters on more and more lands, the pressure becomes real. Is it the most efficient play? Absolutely not, but you can bet if I get the chance I'm going to try to light all of my opponent's lands on fire. Another card that finds a soft spot in my heart is Basilisk Collar. A cheap equipment with two great keywords? Sign me up! With Ashling, it gets even better. Barring indestructible and regenerating shenanigans, putting this collar on Ashling is the equivalent of adding shrapnel to her already dangerous self-explosion. We don't need to build up counters to deal with massive threats if deathtouch stops them in their tracks. Even better, our life total gets a massive boost as we'll gain life for each opponent and each creature. At the absolute minimum, we'll be getting 5 instances of lifegain in a four-player game. If we blow up Ashling with only three counters, we're gaining a net of 12 life. And if you add in more creatures and more counters? I'm sure you see where this is going. If you look at the cost of Ashling's ability and the fact her ability requires three activations to go off, you'll probably notice that we need six mana to light her fuse. That's a tall order, especially for mono-red. Fear not, as this isn't a crippling issue. Mana-doublers such as Caged Sun and Extraplanar Lens give us the purest answer to our problem. We can also alter the cost of Ashling's ability as well. Heartstone reduces the cost of Ashling's ability to a single red mana. Hopefully we have an abundant amount of that lying around. Illusionist's Bracers is another hopeful entrant for our decks. While the upfront cost to gain the advantage is higher than the rest, it still offers the same conversion rate once we get the engine going. Now that we've talked about big mana... Let's talk about turning our exploding Ashling into a nuke. Red does not want for damage doublers. We have many available to us such as Gratuitious Violence or Dictate of the Twin Gods, and the choice of which depends on the rest of your deck construction. We also have access to cards that offer a twist on squeezing out more damage. Chandra's Ignition almost does exactly what Ashling does, but our own creature and our life total gets to dodge out of the way. Arcbond is another option we have, and while it adds to how mana hungry this deck can be, redundancy is appreciated.

As I mentioned earlier, Obsidian Fireheart and Braid of Fire are two of my pet cards that pushed me toward Ashling the Pilgrim, but they weren't the only influences. Hour of Devastation spoilers started last week, and one of the earliest cards we saw was a new mono-red legend: Neheb, the Eternal. After reading his card, I immediately knew he belonged with Ashling! Actually, he could potentially take over the deck himself. 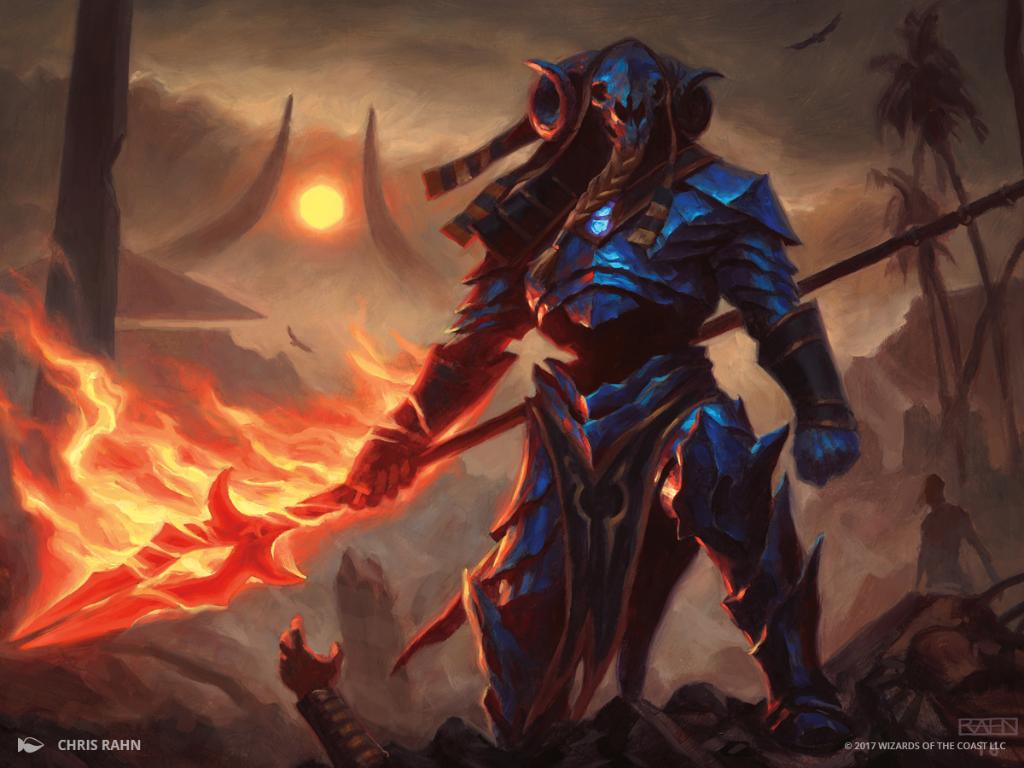 Neheb turns all of our fiery fury into even more mana. He can readily survive quite a bit of damage from an Ashling detonation. If Ashling explodes for 5 damage (enough to keep Neheb alive) in a 4-person game, Neheb generates fifteen mana from that alone. With that we can recast Ashling and reset her for next turn with mana to spare. I expect to see many Neheb lists pop up on EDHREC once the set releases, and I'm excited to see what people come up with. Coming from the previous set of Amonkhet, Soul-Scar Mage is another recent release that adds a few extra layers to Ashling. The red wizard only appears in one deck, but I think it could work into a few more. While the mage won't survive from any Ashling explosion (unless we pump him), the ability to throw -1/-1 counters around the table is very helpful. If we're not able to kill larger threats at the table with Ashling, Soul-Scar Mage will guarantee that they at least will be weaker the next time around. He also offers another outlet for red to get rid of problem indestructible creatures like the gods of Amonkhet and Theros.

However, that's it for this week's installment! I hope you have enjoyed the spirit of our fiery inclusion. Below is a sample decklist. If you have an Ashling deck, or you don't, and you feel like I missed something, please let me know in the comments!

Thanks again for joining me in the Underdog's Corner!