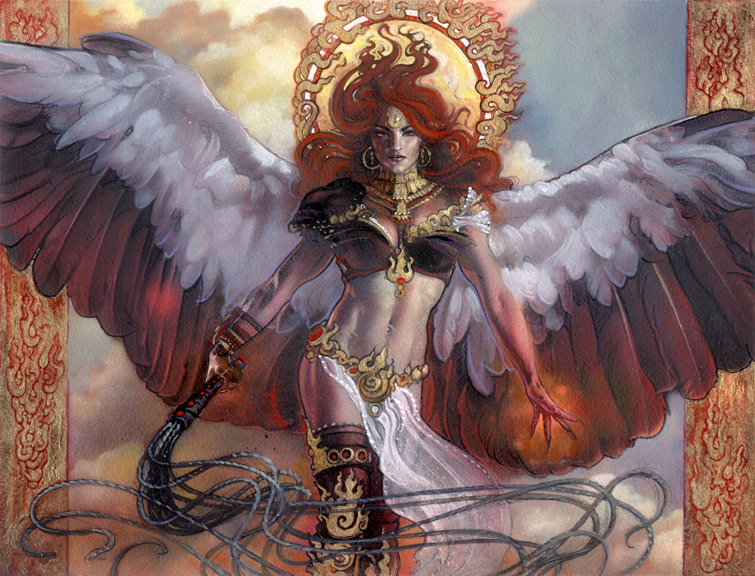 This article is Round 12 of the Underdog’s Corner, a series spotlighting various lesser-used commanders and their place in the format. Each article makes the argument for a single commander that deserves more play, as well as highlighting key cards and synergies.

War! What is it good for?

Hello, hello, hello! And welcome to the dozenth edition of the Underdog's Corner! Somehow we've made it this far, and we're not even close to done! About two months ago, someone suggested that I should look through sets and find the least played legend among said set. Well, what better way to approach that idea than to look at the very first commander supplement! Magic: The Gathering Commander brought us a wealth of incredibly powerful commanders that continue to shape our format. Some continue to be the strongest commanders available for their color combinations, and the others remain powerful options as well. It brought us such powerhouses such as Animar, Soul of Elements, Kaalia of the Vast, Ghave, Guru of Spores, Karador, Ghost Chieftain, and many others. Six of the commanders from this set have over 1000 decklists on EDHREC! Every commander has nearly 250 decks... Except for one. If you're familiar with this series, you know that we are definitely covering that "one." Coming in with only 70 decks on EDHREC is our newest underdog, Basandra, Battle Seraph!

Not only is Basandra, Battle Seraph ranked last among her peers in the original Commander supplement, she also comes in as the 14th most played red-white commander. For all the glass half-empty subscribers, that puts her as the sixth least played red-white commander. She also has the fewest decks recorded among any commander covered in this series so far. She's racking up a lot of accolades before we even start!

At this point, you're probably asking yourself, "So why are we looking at THIS commander if she's played so little?" One of the biggest critiques of Boros-colored commanders is that all of them revolve around combat in one way or another. However, while Basandra does interact with combat, her take on it is what I find most compelling and interesting. At face value, Basandra is simply a 4/4 flier. That's fine, but she's likely to stay out of combat. So let's look at her abilities!

This allows us to set up Basandra's second ability without interference, as well as giving on-board "tricks" a lot more power. Anything that our opponents want to do before combat must be done before combat. This keeps our opponents honest as well as giving us extra information if they choose to play spells during the first main phase. Once we go to combat, that step belongs to us.

This is where things get good; this is pure combat control. There are going to ways around it, such as creatures with activated abilities that require tapping or effects that can tap down creatures, such as Smuggler's Copter or Azami, Lady of Scrolls. But for other creatures? There isn't as much reprieve for them. It also makes our opponents make decisions potentially earlier than they would like, giving every player additional information.

I Ain't No Fortunate One

Basandra relishes the combat step and lives in it, but we need to make sure it favors us in the end. If we're forcing a creature into combat against its will, it's likely our opponent sends that creature towards us to "make it even." So Basandra is here with a few friends to help prevent that from happening. "Pillowfort" is often used to describe cards like the ones above. Ghostly Prison and Archangel of Tithes add a tax to attacking us, which should help incentivize pointing an opponent's ire elsewhere. If we're forcing multiple creatures into combat, we may as well make the decision easier for them. No one will want to point multiple creatures towards us if they're having to pay to do so. Crawlspace helps add another layer to this 'fort as we are able to cap the number of creatures that are sent out way. Lightmine Field and Powerstone Minefield do a much different job than our pillowfort options. While bigger creatures can likely shrug off a point or two of damage, the real kicker comes from making combat even more favorable. Say our opponent is forced to attack with three creatures: a 7/7, 6/6, and a 5/5. Normally we would need eighteen power on board to kill all of them, but with Lightmine Field, it drops down to nine needed power. Creatures become a lot easier to kill when you can jump start the damage. While enchantments and artifacts are all well and good, they don't necessarily add to our board presence. If someone attacks us with a huge creature, and we don't have blockers then I'm sure they'll take whatever penalty they need to pay. Lucky for us, there are other very strong effects that help to protect us. Blazing Archon is one such creature. "Creatures can't attack you." Full stop. This blanks our opponents' creatures and forces them to go elsewhere. Gisela, Blade of Goldnight is an amazing card that we don't need an excuse to play, but now that we do? We get to windmill slam it into the decklist. According to EDHREC's list of top multicolored cards, Gisela is the most played gold creature in commander (by percentage). That positioning is for good reason as Gisela swings combat incredibly in our favor by not only halving damage dealt to us, but also doubling what we deal. This makes the previously mentioned Lightmine Field into an even more deadly hazard.

One of the aspects of commander that I find the hardest to deal with at times is redundancy with the command zone. We choose our commander based on their ability and then build a deck around that. Sometimes though, commander effects are so unique that there isn't a substitute for it. Basandra, however, is not like that. While she's one of the few that can selectively recruit creatures into fighting, we have plenty of options to bring the whole town with them. Goblin Diplomats is a cute little trick. One per round, we can force every creature one opponent controls to attack. Seems really fun! In the early game, this can draw out smaller utility creatures to get the axe. One incredibly important thing I don't think I've mentioned yet is that this effect allows us to bait out an opposing commander that wants nothing to do with combat. My first thought is Mizzix of the Izmagnus. A four-mana 2/2 doesn't want to get anywhere near the fighting, and once combat starts her spell casting prowess is useless.

Fumiko the Lowblood is a unique card that I've seen put to devastating use. Not only does it make all of your opponents attack each turn, it comes with the side effect of leaving them without blockers! Hooray! This is just another incentive not to attack us, especially since Fumiko comes along with Bushido X. If another player is only allowed to send one of five creatures our way, they might reconsider if Fumiko is getting +5/+5. There are always one or two cards per article that I get really excited to talk about. Typically they're the cards that have the strongest synergies among the entire deck and really encapsulate what the deck wants to accomplish, potentially even more so than the commander. War's Toll is just a house, and it's one of my favorite red cards in the game. Not only does it make combat a much more difficult decision for some decks, but it also acts as mana-denial. So first, whenever an opponent attacks with one creature, all of their creatures attack. Basandra targeting a single creature with her ability now makes an entire field run towards battle. What an awesome effect, but make sure you're protected first. Secondly, if an opponent taps a land for mana, tap all of their lands? This is the effect that makes me love this card. My favorite aspect of red is mana-denial, and this brings the full force of that to bear. Our opponents are now limited to playing any and all spells in a single phase of a turn. I hope they make them count.

While mass-land destruction and messing with people's lands in general is often frowned upon, I'm still going to advocate including a few hate cards, such as Blood Moon, Keldon Firebombers and Ruination. These cards help to slow other faster decks down while also keeping greedy mana-bases in check.

That's about it for this week's installment! Below is a prototype decklist, and maybe, just maybe, it'll have 100 cards unlike my last two attempts. If you have any ideas or suggestions just let me know! And as always, thanks for reading!

This is going to be a first, but six and a half months have passed since my first article so I think it's time for some updates! With three standard sets being released and over ten commanders being covered here and there, there are bound to be cards that could find homes with those previously featured commanders! Below are links to previous articles as well as a few suggestions for potential additions!

The Locust God acts as a second Niv Mizzet, the Firemind with added board presence. This card I knew had an immediate home. With a mill theme in the article, Fraying Sanity also should get a look as it greatly accelerates that game-plan. Unesh, Criosphinx Sovereign might be an interesting inclusion if you're more tribal focused as it draws cards and reduces Arjun's cost. Pull from Tomorrow is a great draw spell that helps keep Arjun's hand full.

Kari Zev's Expertise is our basic threaten, but we can potentially get a two-drop out of it as well. It might earn some consideration.

Patron of the Moon

Kefnet the Mindful let's us bounce lands to our hand while giving us a resilient flyer, and Tragic Lesson's downside becomes negligible for our land-falling spirit.

Since we're already aiming to combo, the addition of Devoted Druid, Vizier of Remedies might earn inclusion. Vizier also combines with Woodfall Primus and Kitchen Finks. That's three two-card combos from this one new release. Uncage the Menagerie helps us to find any key pieces we may need... such as the Druid and Vizier.

Saving Grace is a very cheap mass prevention spell. Since we're in white, we have plenty of recursion for it if we want.

I hope you enjoyed the small trip down memory lane! Until next time!