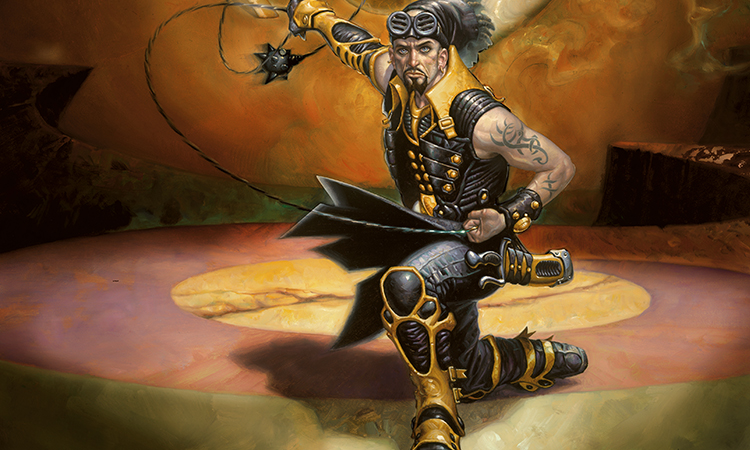 This article is Round 10 of the Underdog’s Corner, a series spotlighting various lesser-used commanders and their place in the format. Each article makes the argument for a single commander that deserves more play, as well as highlighting key cards and synergies.

Hello all, and welcome back to the Underdog's Corner! While I mistakenly said that Selenia, Dark Angel was from the "Black Set" last time, our newest underdog for this article actually is from Torment. Continuing with my want to even out the color distribution of our series, Chainer seemed like a perfect fit. I got to play against a Chainer deck often for a short while, but in that time our nightmarish entrant made an impression on me. To my shock, Chainer is the 12th most-played mono-black commander on EDHREC. After seeing him first-hand, I think this legend's age is holding back his deck numbers more than his power level. Let's take a look at our old pit fighter.

Our local Cabal pit fighter doesn't mix words, and his ability suite immediately lets us know who we're dealing with.

"BBB, Pay 3 life: Put target creature card from a graveyard onto the battlefield under your control. That creature is black and is a Nightmare in addition to its other creature types."

For an investment of three black mana and three life, Chainer gets to put any creature from ANY graveyard into play under our control. We aren't just limited by our creatures as Chainer lets us reach into our opponents' graveyards to play with their cards. Not only that, but we get to do it at instant speed as well. Their dead become our toolbox. Chainer also acts as an anthem for our returned or stolen creatures, and while it's not as important as his reanimating ability, it can still be relevant. However, as it seems to be with most things in black's slice of the color pie, power comes at a cost. If Chainer leaves the battlefield, we have to exile all Nightmares from the game. This isn't quite as much of a downside as it may initially appear. Chainer has a few tricks up his sleeve that help us mitigate this "cost."

Chains Keep Us Together So when we look at Chainer's ability, I take notice of his ability's two costs. Triple black would normally be prohibitive in a deck, but since we're only playing in one color, that's not an issue at all. If we compare it to other popular and powerful reanimator spells, the mana requirement is actually a deal. This is especially so since we get to reach into our opponents' graves. Paying three life in a format that starts at forty isn't that big of a deal either, but there can be a point in the game where that payment starts to look harder to pay. However, neither of these issues are critical things to worry about since mono-black has ways to mitigate those in spades.

One thing mono-black has going for it is access to big mana. Crypt Ghast, Caged Sun, and Cabal Coffers all give us access to doubled mana. From there we can pour that into Chainer's ability to resurrect an army at will. However, since Chainer's ability is so mana-intensive, we want to be able to find these pieces when we need them. Well, we're in mono-black, so that's not an issue either. Entomb and Buried Alive let us dig through our library for easy access to any creatures we need. Expedition Map lets us dig for not only the aforementioned Cabal Coffers, but other important lands such as Nykthos, Shrine to Nyx, Thespian's Stage, or Bojuka Bog. Black also has access to one-shot unconditional tutors like Demonic Tutor and Diabolic Tutor as well as tutors stapled to bodies like Sidisi, Undead Vizier that allow us even further access to parts of our deck when we need it. Black is also the color most well-known for draining life to gain life, Chainer gets to play several black staples that help us push towards a win while also supporting his ability's cost. Once relegated to the banlist, Kokusho, the Evening Star will recoup the life lost to bring this dragon back from the grave. Spending our turn pouring our mana into reanimating Kokusho multiple times quickly leads to draining our opponents dry. As long as Chainer, Dementia Master is on the board, Gray Merchant of Asphodel does nearly an identical impression of Kokusho that can scale with our devotion. Since we're going to be busy sacrificing creatures anyways, Zulaport Cutthroat also gives us a hand if buoying our life total against Chainer's cost.

Access to sacrifice outlets is also a big deal. We're already going to probably facedown grave-hate such as Relic of Progenitus or Rest in Peace at some point, so there's no need for us to give up our creatures when we don't have to. Altar of Dementia is the most played card in Chainer decks, and it isn't hard to see why. Along with being able to sacrifice creatures freely at instant speed, we also can mill ourselves into more graveyard fuel. Another play with sacrifice outlets is being able to reanimate multiple creatures at once and sacrifice Chainer before his ability resolves. If we're looking to grab multiple high-profile targets, removing Chainer ensures that we get to keep those creatures around. Now what good is it for us to do all this without hindering our opponents? While Chainer can throw haymakers left and right by reanimating massive and powerful creatures, he can also control the board. With access to multiple Grave Pact effects, Chainer can help us clear the board and keep it that way. While Dictate of Erebos is good as a redundant enchantment, we also have reanimator targets to strip the creatures from our opponents. Merciless Executioner, Fleshbag Marauder, and Slum Reaper are all recurrable effects that can cripple creature-based strategies.

Along with those pieces, we can cripple our opposition in other ways as well. Massacre Wurm adds insult to injury by not only removing clearing the board, but also hitting life totals as well. It gets even worse if we can chain together multiple reanimations of our phyrexian scourge. Mindslicer does the two-fold job of not only stripping our opponent's hands and keeping it that way, but also fuels our gameplan by filling every graveyard. If we're feeling really cruel, Contamination can absolutely cripple a table as players will need to rely on mana rocks to generate any colored mana.

One of the things I enjoy most about brewing is finding cards that offer powerful or unique interactions. Typically, these cards aren't what would normally be considered "good," but this is a series on underdog commanders, so why not have a few underdog cards for them?

One card that I thought of immediately when I looked at Chainer was Priest of Gix. However, after looking at EDHREC's page, I discovered that only four decks are running it. I can see the arguments for not including it; the most prominent reason being that a mono-black deck doesn't necessarily need help producing triple-black. However, I think that there is utility in having this creature available. Let's look at a few examples.

With "free" sacrifice outlets, we can generate a number of death triggers or enter the battlefield triggers with each time we loop Priest of Gix as long as we have life to pay. For death triggers, Harvester of Souls along with the priest effectively reads "Pay 3 life: Draw a card." Not quite Necropotence, but it'll generate advantage. If we have a Zulaport Cutthroat or Blood Artist on the field, our life loss is offset slightly as we also drain our opponents. For our last example, let's look at the ever-present sac-out, Ashnod's Altar. Ashnod's Altar appears in nearly 50% of Chainer decks. By combining Chainer and our Priest, we get to cobble together our own Treasonous Ogre. By paying 3 life to generate two colorless mana, we can then funnel that mana into an explosive plays like a massive Exsanguinate.

The next card only appears in 7 Chainer decks, and I only recently thought of this. As we discussed earlier, Chainer really likes big mana as it let's him pull multiple creatures from the graveyard in a turn, but we are probably going to be relying on those creatures to at least survive a turn outside of any powerful ETB effects. This is where this choice comes in. This is self-admittedly a "jankier" option, but I thought back to when Mogis's Marauder was in Standard. Between Chainer and the Marauder, we get to give a minimum of three creatures intimidate and haste. This let's our boosted nightmares swing in with some evasion.

As we wrap up this week's article, I hope that I left you with an appreciation of a our resident master of nightmares. Also, as requested, this article series now features a decklist!