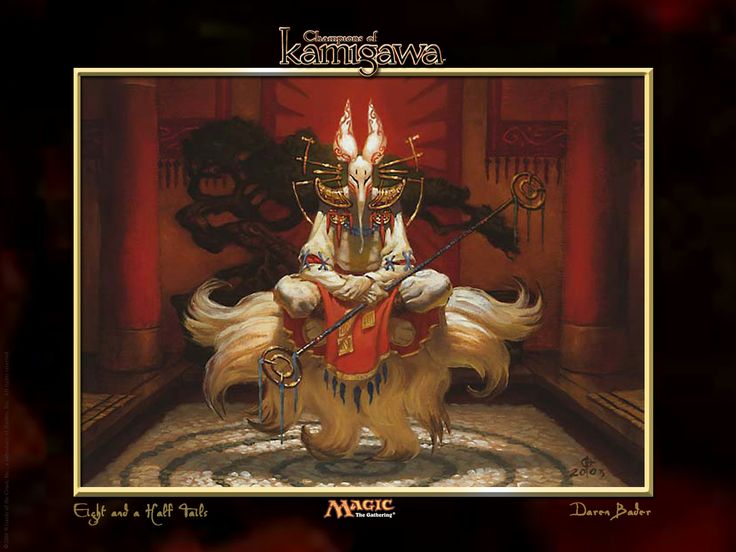 This article is Round 6 of the Underdog’s Corner, a series spotlighting various lesser-used commanders and their place in the format. Each article makes the argument for a single commander that deserves more play, as well as highlighting key cards and synergies.

Grab a Cleric by the Tail!

Come one, come all, and welcome back! It's been a while, but I'm back with another installment of the Underdog's Corner. I had some time to consider who to write about, and I considered several options before deciding to explore a strategy that didn't involve heavy sacrificing. This pushed some other potential underdogs like Endrek Sahr, Master Breeder down the depth chart, but now we get to explore a new gameplan. With this in mind, I looked to the color distributions of the covered commanders, and I decided that I really wanted to cover another white general, specifically mono-white. Looking past the top five most-played mono-white commanders, one in particular stood out. With that in mind, we're going to take a trip back to Kamigawa for this week's legend: Eight-and-a-Half-Tails!

Eight-and-a-Half-Tails comes in as our sixth most-played mono-white commander with 223 decks. Despite this number, he will probably be bumped down to seventh place soon by the newcomer, Sram, Senior Edificer. However, this doesn't take away from the unique style that our fox cleric brings to the table.

Let's break down his abilties:

"1W: Target permanent you control gains protection from white until end of turn."

All right, so what do we do with this? At first glance, this ability seems quite lackluster. If we're playing in a mono-white-decks-only free-for-all, then this is incredibly powerful. Since that is incredibly unlikely, this ability only affects single color of the game. For that one color, it can be a saving grace though, as we can freely chump block beaters like Avacyn, Angel of Hope, Sun Titan, or Zurgo Helmsmasher. For the rest of the game, we're not as fortunate. Surely our commander's second ability will be more impactful...

"1: Target spell or permanent becomes white until end of turn."

Well...at first glance this ability does even less than the first. At least with the first ability, there are applications such as our four-way mono-white prize fight. Turning a permanent or even a spell white doesn't seem very impactful at first. However, these abilities have more potential than it appears, especially so when we combine them. This is where our commander's strength lies.

The Color of Change

While I did originally lament the limitations of each ability, that doesn't mean that we can't take advantage of the powerful combinations that exist. Taking a look at Eight-and-a-Half-Tails' second ability, we can ask ourselves, "What lets us take advantage of turning a permanent white?" Quite a few actually! While it's potentially too narrow for inclusion for some people, Glare of Heresy becomes one of the best removal spells in the game in this deck. I think the ability to exile any permanent for three total mana is invaluable. Yes, any permanent. This means we exile problem enchantments, planeswalkers, and even lands. Eat your heart out, Vindicate. Staying on the theme of removal, Pentarch Paladin becomes a repeatable source of creature destruction. Additionally, while its cost is extremely color heavy, that's perfectly okay as Nykthos, Shrine to Nyx should be a windmill slam inclusion in this deck. It already appears in 60% of decks on the site, but I'm sure we could easily see it climb to 70% or 80% and not bat an eye. Moving on from spot removal, are there forms of mass removal that we provides us some additional value? You bet. While Mass Calcify is already almost a one-sided board-wipe in a mono-white deck, we can save key artifact creatures from death if we so choose. Maybe we don't want our Wurmcoil Engine, Solemn Simulacrum, Burnished Hart to leave us yet. Well, they don't have to with our fox general looking after them. Next up on our radar is Ugin, the Spirit Dragon, and he's got a bone to pick with other decks. Ugin only appears in about 14% of decks right now, but I'm going to chalk that up as a reflection of its price rather than it's playability. Ugin ends the game in short order with Eight-and-a-Half-Tails on the board. The turn we play our spiritual dragon, we can clear the board of any threats, and then potentially replay our commander the next turn. After that, it's a matter of grinding out our opponents' resources. Eight-and-a-Half-Tails targets our opponent's lands to turn them white, and then we use Ugin's -X ability and choose zero to exile them.

"Ok, but isn't it a bad idea to completely rely on our commander to use these effects?" Normally, I would agree! However, there are actually a couple of cards that give us redundancy in our color-changing ability. While neither of them show up on EDHREC's top played cards for the deck, I think part of the problem is that the cards are older. We actually have two additional options in Aurora Griffin and Cloudchaser Kestrel. Like our commander, these creatures can turn any permanent white, and the ability to do so only costs one mana. Despite being colored, this shouldn't be an issue in a deck full of white cards.

Combining this color-changing ability with our commander's ability to give creatures protection from white is where things start to get interesting. While we mostly discussed turning permanents white to take advantage of our ability, we can blank removal as well. If an opponent tries to destroy a key piece of our board with a removal spell, Eight-and-a-Half-Tails can target the spell to turn it white, and then use it's other ability to give the target protection from white. This causes our opponent's spell to be countered. We can also save key creatures from red-based board wipes such as Blasphemous Act. If we're tight on mana, or if our commander isn't around, we still have access to other options like the fantastic Mother of Runes.

This ability is where we can begin to develop a damage prevention theme. 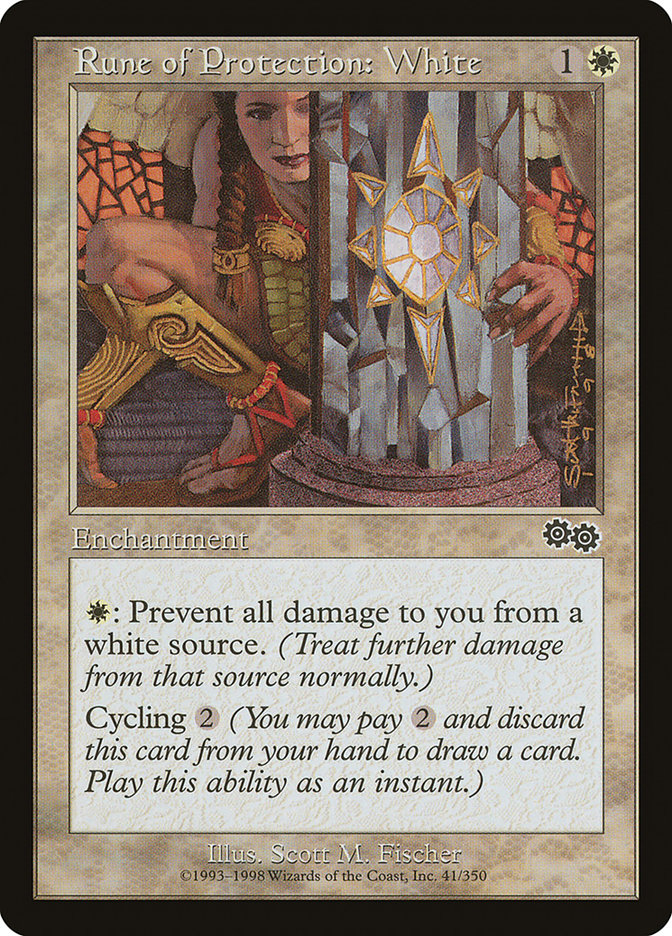 Circle of Protection: White, Rune of Protection: White, and Story Circle all offer identical effects with slight variations. With the help of our commander, these can help stonewall certain strategies like voltron builds. For decks that go tall rather than wide, we can create an instant uphill battle. For decks that go wide, we won't have enough mana to prevent all the damage, but we can reduce the amount we can take by limiting how many attacks can come our with with Silent Arbiter, Ghostly Prison, or Crawlspace. While this deck isn't necessarily aiming to be a pillowfort, some elements are still welcome. One card that shows up in only 13% of decks that is useful in locking down our opponent's board is Crackdown. Nonwhite creatures our opponents control won't untap, and then if there are any white creatures we can swing past them with our commander's protection ability.

If we really want to go all-in on the ability to prevent damage, there's no question to including Selfless Squire. Not only does it give us a way to blank damage for a turn, it also turns into a massive beater which Eight-and-a-Half-Tails can then launch at our opponents. If we're looking for another way to weaponize damage prevention, Comeuppance is another great option. While holding up four mana consistently for it can be difficult, when it becomes relevant it will often cripple an opponent. Finally, while not nearly as objectively powerful as her other versions, Avacyn, Guardian Angel gives us a powerful option to blank damage entirely from a single color.

Swinging for the Foxes

By looking through the most played cards on Eight-and-a-Half-Tails' EDHREC page, the most common strategy for our friendly fox is winning by commander damage and controlling the board with hate-bear effects such as Hushwing Gryff.

Eight-and-a-Half-Tails' abilities allow us to protect our general from forms of spot removal while also having the ability to slip past a low number of blockers. When put together this potent combination gives us a commander that is very difficult to lock down without a major investment. Even if that does happen and our general does get caught and destroyed, his low converted mana cost allows us to recast him multiple times without a heavy investment. This fox keeps coming back. Even if we're not threatening a commander damage victory, an equipment subtheme can still let our creatures swing for a great deal of damage with little repercussion, as our commander can prevent damage from any blockers in our way.

I think that wraps up this week's article, and I hope you've enjoyed reading about this unconventional commander. Damage prevention is a concept I've always really enjoyed, and I'm glad Eight-and-a-Half-Tails exists to helm a deck around it. With the printing of Selfless Squire, I can only imagine that there will even more cards to fill the deck with in the future.

Thanks for once again joining me in the Underdog's Corner!