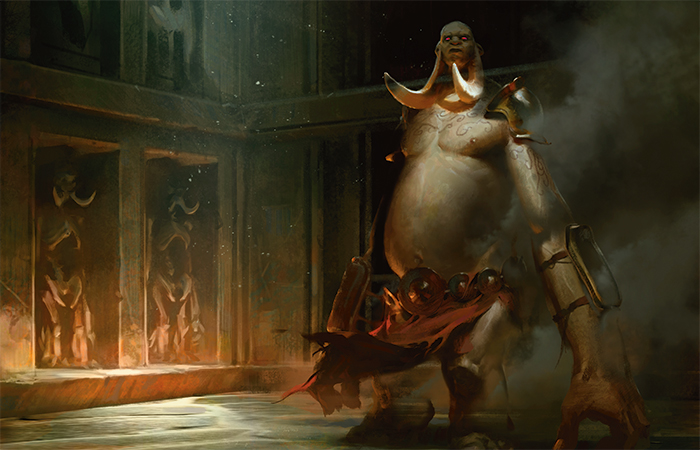 Hello, everyone! I hope you all have been enjoying the Dominaria spoilers season as much as I have, because I am looking forward to explore many of the new cards! Before we get of ahead of ourselves though, welcome to the Underdog's Corner! This series is dedicated to shining a light on commanders that don't get much spotlight thanks to either their color peers or maybe they were left behind by other legends in the set that they arrived in. Either way, we accept them all the same. While I talked a bit about Dominaria, this week we pull our newest entrant from a plane that feels like it's been around just as long. Yes, our newest Underdog hails from the plane of Shandalar, and while we may not know much about them we have certainly heard of his kind. Give it up for Kurkesh, Onakke Ancient!

When you hear the phrase "red artifact commander," the first answer the majority of Commander players will point to is Daretti, Scrap Savant. While this is to be expected, Daretti doesn't get to hog all of the spotlight as there are quite a few other artifact commanders in mono-red. If you're looking for variety, we can also check out Bosh, Iron Golem and Slobad, Goblin Tinkerer. However, we're focusing on Kurkesh, Onakke Ancient for this installment. So why is that? Let's check out the card:

Whenever you activate an ability of an artifact, if it isn't a mana ability, you may pay

. If you do, copy that ability. You may choose new targets for the copy.

A few things should immediately stand out for us when we read this. 1.) Kurkesh cares about activated abilities of artifacts. 2.) Kurkesh can copy them if they aren't a mana ability for a single red mana. This gives us a clear direction on how best to build our general. Kurkesh is going to be a "value" commander: we're going to leverage our activated abilities to try to pull ahead of our opponents in resources... or at worst we can do it to keep up with decks that traditionally generate value. This deck will help to overcome some of the shortcomings of what red as a single color can do.

"What? Red doesn't get to draw cards! We get Outpost Siege effects." While yes, red traditionally gets "exile-draw" effects, Kurkesh actually gives us an avenue to draw a lot of cards as a mono-red deck. Have you ever cast a Divination before? Well, get ready to do that a lot in this deck.

One of the easiest inclusions with Kurkesh are artifacts that can trade themselves in for a card. Commander's Sphere is one such. At three mana, it's beginning to get on the pricy side for a mana rock that makes only one mana, but I think that's extremely permissible here as it can sacrifice itself for a card. I have never felt bad about having a Commander's Sphere on the board, and in Kurkesh it actually is a great feeling. With our commander out, the sphere becomes "Tap, Sacrifice Commander's Sphere: Draw two cards." Divination in Mono-Red? I will take that every day. It doesn't stop there though. Tamiyo's Journal actually let's us generate value each turn. Clues are still artifacts even though they're tokens, and they do activate to sacrifice themselves and draw a card. This means that, yes, Kurkesh can copy the clue's draw ability. I wish I could say I thought of this interaction on my own, but the credit for that goes to Andrew Cummings' article on Kurkesh in his series Ultra-Budget Brews. Even without Kurkesh, clues are still fantastic to generate card draw, and they also feed into the sacrifice engines that are a part of this deck. Oh, and I almost forgot, but if we aren't trading in our clues for draw power, we can still store them up and then double tutor with the Journal...

While tutoring isn't traditionally thought of in the same realm as "draw," for us it's going to be one in the same. Expedition Map and Wayfarer's Bauble allow us to trade them in to "draw" two lands each. While Map is superior as we can draw any two lands, the Bauble is still worth considering as even grabbing two basics will help to hit our land drops consistently.

What about a little bit more utility in our draw power? Pyrite Spellbomb can act as another Divination-egg, or we can chuck it for 4 damage at any target. Did you know, of the 750 currently legal commanders listed on Scryfall's database, 535 of them have a toughness or four or less? We can burn out over two-thirds of legal commanders with this trick. However versatile we may think that is, nothing will ever top the versatility of Trading Post. While all modes may not be useful at the same frequency, you will never be upset to have them. The underdog of these four options is definitely creating goat tokens. In the few games I goldfished with the deck, playing Kurkesh after Trading Post, and then making two goat tokens is actually a very solid line of play. The last two modes are obviously powerful, in my opinion. Sacrificing a creature or artifact to get two cards for two mana is a very good deal.

While Kurkesh is value-oriented, we still have the option to go infinite inside the deck. This deck won't be racing to that end, and the pieces themselves are powerful engines on their own.

Gilded Lotus is a powerful mana rock for us, but most of the time in this deck it is a more expensive Thran Dynamo. However, this changes once we add in Voltaic Key. Together, they generate infinite red mana. If the interaction isn't clear, we add three mana from the Lotus, and then use one mana to activate the Key and the other to pay for Kurkesh's ability, copying Voltaic Key. This nets one red mana per cycle.

While this is a great option to have, it's not what we're going to racing towards (but you can if that's what you're into!) Voltaic Key more often than not will help us generate value in the long run. With something like Basalt Monolith or Thran Dynamo we can actually generate more mana by feeding the engine. For every red mana we feed into the Key-Kurkesh-Dynamo engine, we get two colorless out of it. For example, if we start with five red mana, we will convert that into ten colorless along with the three mana from the Dynamo. That's a massive mana jump.

However, Kurkesh isn't the only card we have that can copy abilities. Rings of Brighthearth is effectively a second copy of our general for the sake of utility. It doesn't work with the aforementioned Voltaic Key and Dynamo engine, but it does let us generate infinite mana in other ways. We mentioned Basalt Monolith above, but with Rings it lets us generate infinite colorless mana. All we have to do is copy the untap ability.

While it may not be as active as our general and the rings on it's own, Strionic Resonator is going to generate value time and time again. We can copy the death trigger of a Wurmcoil Engine or maybe a Treasure Keeper. We can even copy the triggered ability of Kurkesh himself! Using four mana to copy an activated ability of an artifact twice is still a great deal.

Artifacts of the Past

While we already talked about copying some abilities, I thought I'd spend a little time covering a few of the other available options. Kuldotha Forgemaster serves us in two ways. First, it's an artifact sacrifice outlet, and it can even sacrifice itself! This helps as we do have several recursion engines in the deck. Notably, it tutors an artifact straight onto the battlefield. Combined with Kurkesh or Rings? Well, we can fetch any two artifacts in our deck. That means we can grab our infinite mana combo if we so desire or fetch any pair of utility artifacts we may need like Universal Solvent or Pyrite Spellbomb.

Activate Burnished Hart, copy the trigger with Kurkesh, grab four lands onto the board. I don't think I need to elaborate more on that. Hart is a ramp staple for non-green colors, and it really shines when you can recur it multiple times.

Prototype Portal is a pet card of mine, but I can't help but slot it into Kurkesh. You don't need to exile a Wurmcoil Engine with it to be powerful. Honestly, more often than not, I would rather imprint a Sol Ring. For two mana, we can make two sol rings? Combine with Voltaic Key and we can make four sol rings out five mana. That's some serious mana advantage.

That is it for this week's issue of the Underdog's Corner! I hope after reading that you give our ancient spirit a second chance at life. I think that he offers a very unique and build-around approach that other builds don't lend themselves towards. I always am looking for these types of builds, and Kurkesh really satisfies that want. If you're looking for ideas of how to start building Kurkesh, check out the prototype deck below!

Until next time, thanks for joining me in the Underdog's Corner!