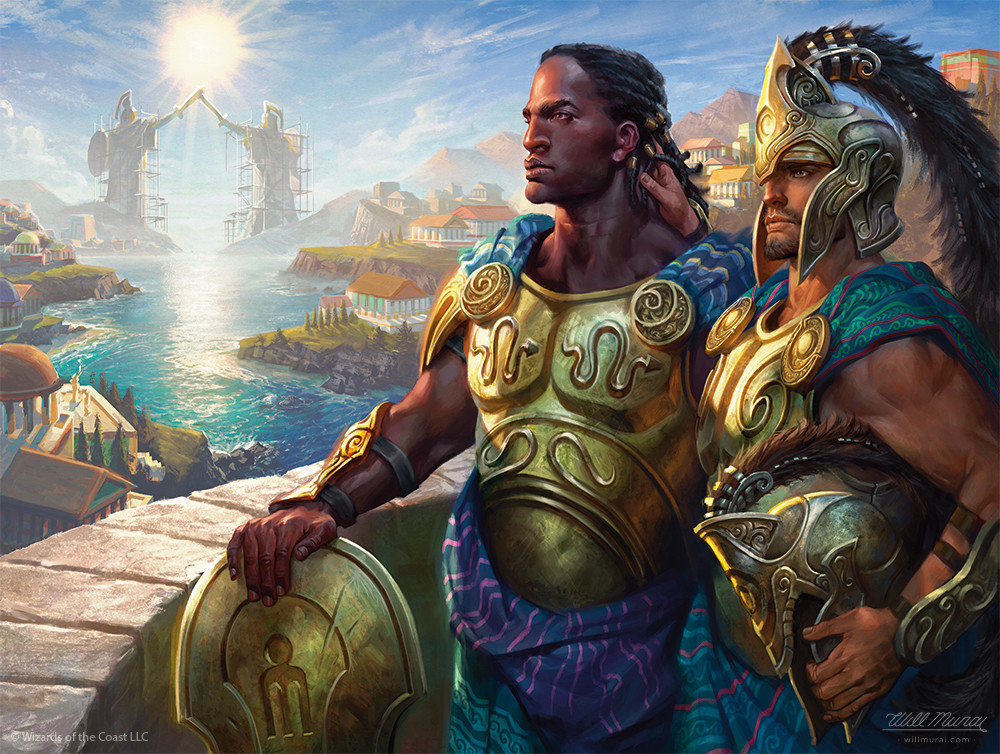 Hello all, and welcome back to the Underdog's Corner! I hope you are all having a lovely Monday so far, wherever you are in the world, and I'm here to bring you a new Underdog and a deck to go with it! We are back with a new commander that I think needs a little love. However, there might be arguments that they don't need love at all. Meet this week's entrant into the ring: Kynaios and Tiro of Meletis!

Wait...this is an Underdog?

I guess this phrase is racing through some readers' heads, but give me a chance to defend myself. My first defense is that the marquee legends for Commander 2016 have an incredibly inflated number of decks. Not that Commander series commanders aren't popular to begin with, but I do think the fact these were the first proper four-color commanders helps. My next argument is that compared to their peers, Kynaios and Tiro are underdogs. They have to compete with the likes of Atraxa, Praetor's Voice and Breya, Etherium Shaper each sporting over 4,200 and 3,000 decks respectively. Even Yidris, Maelstrom Wielder helms over 400 more decks than K&T. The next reason is that we're going to explore an archetype that isn't group hug. Over 65% of current lists for these pillars of Meletis include Propaganda and Ghostly Prison, and we're going to avoid them. However, the real reason for this commander's underdog status is the inclusion of a card that is in less than 1% of current Kynaios and Tiro lists.

Kynaios and Tiro of Meletis

I think Kynaios and Tiro got a bad rep early due to the group hug nature of their effects. Giving your opponents resources with abandon can be dangerous, so we're going to try to minimize that as much as possible going forward. The first step to doing that is maximizing what Kynaios and Tiro can do for you.

"At the beginning of your end step, draw a card."

Simple enough. While K&T are on the board, we effectively have the Monarch emblem (ignoring the fact the opponent can't take it from us.) I highly value incremental card advantage, and these two give us that in the command zone.

"Each player may put a land card from his or her hand onto the battlefield, then each opponent who didn't draws card."

This is where people get a little wary of K&T, the part where we give our opponents resources. Each player at this point gets to put a land onto the battlefield, including us. This does ramp our opponents, but that shouldn't make a difference to us. Of note, all the lands enter the battlefield simultaneously for any effects that care about that. After all chosen lands have entered the battlefield, any opponent who didn't play a land draws a card.

Abundance? You mean an Overabundance

One thing about this deck is that it runs a lot of lands. The current list is sitting at 44 lands, and there are times where I think there could be more. Why? Because we're running basically every exploration effect we can get our hands on. If I were better at statistics and probability, I could calculate how many pieces I really need and the chances to have 1 or 2 of them within X many turns. Alas, I will leave that to someone else. Exploration is the deck's bread and butter, and the effect doesn't get much more cost effective than that. Beyond Exploration, we have several creatures that can also bolster how quickly we can dump our lands. Azusa, Lost but Seeking is being reprinted soon, and on the opposite end of the spectrum we have the newly released Wayward Swordtooth. We have plenty of redundancy.

Speaking of redundancy, we even have the Modern-banned Summer Bloom at our disposal. Being able to end our second turn with up to five lands on the board is sure to accelerate us way past our competition.

However, that brings us to where this strategy quickly runs out of steam. It's great if we are able to continuously drop land after land, but we quickly run into diminishing returns as we exhaust our hand's supply. We need to be able to keep our hand filled if we want to keep maximizing the ramp potential. One card that bridges this gap is Journey of Discovery. This modal spell allows us to either fuel our ramp package or facilitate the ramp itself. Late game it can do both, but I suspect we won't need it with our other pieces lying around. Cards like Cultivate and Kodama's Reach are useful as we will often be able to drop both lands we search for. One card that is a bit of a pet inclusion is Seek the Horizon. I have a gorgeous Khans of Tarkir foil that needs a home, and this seems like the best place for it.

Landfall strategies are some of the more beloved in the game, and it's no surprise that a deck that wants to churn out lands is going to include them. Avenger of Zendikar is the classic army in a can. In this deck, by the time you cast him you'll likely be able to create seven tokens and then immediately pump them. Omnath, Locus of Rage is basically a "hidden commander" for the deck. Once we drop our elemental hulk onto the board, the chances of us quickly amassing an army of 5/5s is very likely. For one mana less and a much easier casting cost, Rampaging Baloths offers us redundancy in big tokens. While these are pretty easy includes and are sure to help us move closer to victory, what else can we look into?

Meloku, the Clouded Mirror is the perfect card for when you get stalled out with no lands to play. With an Exploration effect on the board, we can safely generate a mass of flying tokens very quickly. Combined with our commander, we can also guarantee we have a land to play if we don't feel like rolling the dice with Kynaios and Tiro of Meletis' draw ability. Speaking of drawing, Tireless Tracker gives us free card advantage in the form of clues. Once again, this is a great card for when we stall as we can use all of our mana and our clues to dig through our deck.

We have finally arrived to the section I alluded to in the beginning of the article. This is where we focus on a bit of combo potential in the deck. Ruin Ghost is a pet card of mine, and also one that is criminally underplayed in my opinion. Free landfall triggers are great, and resetting powerful lands is even better. For a single white mana, we can reset cards such as Gaea's Cradle or Nykthos, Shrine to Nyx... if either of them were actually in this deck. Mostly, Ruin Ghost is a landfall enabler with a pinch of color-fixing. The reason for my astonishment and commitment to talking about the spirit is its lack of play... Not only in Kynaios and Tiro but in EDH as a whole. According to EDHREC, Ruin Ghost is only played in 117 decks. Not 117 K&T decks. 117 decks total. How many Kynaios and Tiro decks is it in? Only a paltry 14. For the math nerds out there (myself included), that brings Ruin Ghost to being included in 0.77% of K&T decks... Well then.

Now why should you care about some uncommon from Zendikar block? Because of another uncommon from its sequel, Battle for Zendikar. Retreat to Coralhelm allows us to generate an infinite number of landfall triggers as long as we have a white-producing land that can enter untapped. That is actually very easy in this deck with the amount of land-searching effects. Infinite landfall lets us most often generate infinite tokens, which will usually be enough for a win. However, we can also generate infinite mana or infinite clues easily as well. Either way, this gives us the tools to make a strong play towards a win.

Retreat to Coralhelm also let's us play the Knightfall combo as well with Knight of the Reliquary. While this isn't nearly as strong as it is in a 60-card format, it still has plenty of versatility.

Meletis by the Sea

That is it for this week! I hope you have enjoyed my take on an "unofficial-official" underdog, and I hope it might generate new ways to look at this commander! I really enjoy what Kynaios and Tiro of Meletis have to offer, and I hope you might be able to take a new look at them and see their potential beyond group-hug and pillowfort.