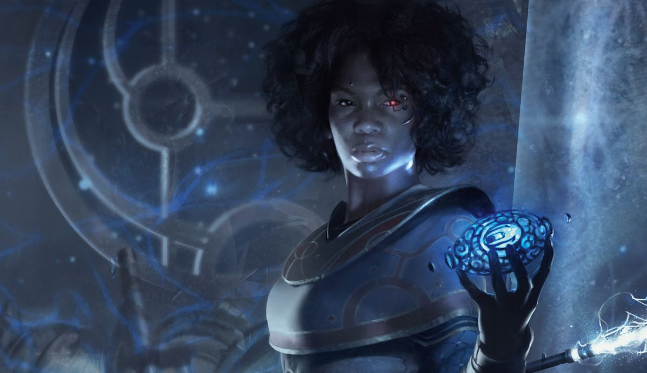 Hello, one and all, and welcome back to another edition of the Underdog's Corner! Today is the day many of you have been waiting for, and I hope I don't disappoint. If you have never read this series before, I am here to highlight underappreciated, unloved, or forgotten commanders, and give them a new breath of life. For those who have followed this series for the past two and a half months, I've recently covered a variety of underdogs from the latest expert-level expansion, Dominaria. Dominaria brought with it forty-four new legendary creatures! With that many, some were bound to be left behind. While I have covered many various legends, there's one legend that has been requested more than any other. Today is finally the day we cover that commander. Ladies, gentlemen, children of all ages, I give you: Rona, Disciple of Gix!

During EDHREC's Dominaria spoiler coverage, I wrote our review of the gold uncommon cycle of which Rona is a member. In that review, I mostly panned Rona as being "more weird than good." This evaluation only emboldened her fans, who have asked to see my spin on a Rona deck - hence today's article. Before getting to her card, let's take a brief look at her stats. With 14 decks to her name, she's the 39th most popular commander from Dominaria, which is to say she's the sixth least popular commander from Dominaria. If we compare her to other blue-black commanders, she is the fourth least-played. Now let's take a look at what we're working with:

You may cast nonland cards exiled with Rona.

This line of text is exciting, but before we go into further detail, we need to understand how Rona exiles cards.

When Rona, Disciple of Gix enters the battlefield, you
may exile
target historic card from your graveyard.
(Artifacts, legendaries, and Sagas are historic.)

There we go. Rona lets us recycle our busted-up artifacts, legends, planeswalkers, story books, etc. just by coming into play. If she's able to survive a round at the table - or if we have extra mana after we cast her - she's effectively a limited Eternal Witness, which is still really good.

Luckily for power balance, and unluckily for Spikes everywhere, Rona needs to tap to use her ability, which significantly nerfs its power and utility. However, that's not the worst thing in the world. Otherwise, she'd be akin to a blue-black Thrasios, Triton Hero.

Not only is Rona a pseudo-E-Wit, but she can also function as a kind of Azure Mage. Her last ability always trips me up, especially combined with the former. While Rona can only exile historic cards when she enters the battlefield, she can actually cast any type of nonland card from exile. That means if we exile an instant or sorcery with her tap ability, we can still cast it. Also, notice the word "cast." There is a significant chance that we'll whiff by exiling a land, which Rona doesn't allow us to play from exile. Let's be optimistic about that, though; by the time we're consistently using Rona's tap ability, we'll be wanting to draw gas on our turns anyway, and by exiling lands, she'll clear those cards away for better draws.

We do need to make one major observation before moving on. If Rona leaves the battlefield for any reason, be it blink, destruction, or returning to the command zone, every card exiled by her is lost forever. She isn't Mairsil, the Pretender. This is because Rona becomes a "new object" once she enters the battlefield again, and as such, will only have memory of cards she has exiled during her current stint on the battlefield. If you have questions about the implications of that, leave me a comment!

However, I'm not here to talk about what Rona isn't, I'm here to talk about what she is. Rona is a Frankenstein-style mash-up of abilities, and I've spent a lot of time trying to figure her out. She's definitely weird, but I think the biggest hurdle for me personally is that it's tough to evaluate her in a different light. Many people choose a commander because its abilities are of interest to them. Because of this, most players want to play their commanders out often and early, to fully leverage a deck's theme. This compounds even more when a commander has a low converted mana cost. The lower the cost, the faster we can play them. That's typically how I think about commanders.

However, I don't think that's where Rona fits, and I believe that's why I've struggled so much with her. Rona isn't meant to be an early game piece. She strikes me as a card that will be subtly powerful in the mid-to-late game, where she functions as accessible recursion and (albeit limited) draw power. So what do we do with her?

Rona falls into a color combination that is well-known for its artifact synergies, so we are left with a ton of options from which to pick. First and foremost, let's remind ourselves that Rona can only cast exiled cards for as long she remains on the battlefield, and if she leaves, we lose those cards forever. This consideration pushes us in a few directions. The first is that we aim to exile cards that she can immediately replay.

Artifacts have always been known for having powerful, low-cost abilities, and we can use that to our advantage. Lotus Petal is a humble card in this deck, but being able to buy back a free mana is useful. Silver bullet answers like Tormod's Crypt become incredibly reliable and resilient as Rona can recur these specialists to the field. Not only that, but they also come with available redundancy. Mox Amber and other mana rocks become recurrable, and other answers like Executioner's Capsule also get stamped as recyclable.

Not only does Rona give us an avenue to replay these cards, but we also have ways to find them. Together, we can double-tap our uses for greater value. Trinket Mage is an incredibly powerful and versatile toolbox. While a blue "Grey Ogre" isn't much, having a body left over after we tutor for these answers is just sweet. It's not the fifth most played blue creature for nothing. Along with the mage, we have a fun gem from Fifth Dawn. Appearing in only 640 decks compared to Trinket Mage's 15,000, Artificer's Intuition is the bizarre lovechild of Trinket Mage and Survival of the Fittest. Not only does it let us tutor up these low-cost artifacts, but it also allows us to pitch cards into our graveyard. While it may appear that we're trashing our cards, Rona will pick them right up to polish.

Artifacts of the Past

While tutoring up silver bullets is going to be useful in most games, it's not going to helpful close out games or move us towards a position to close out a game. However, once again, we have options for our colors. Since Rona's already on the weird and somewhat jank side, let's make sure we include something fun.

Weatherlight is one of the best vehicles that we could possibly include. While it may be tough to Crew it with just Rona, we have enough creatures to make it work. More importantly, since we're primarily focusing on artifacts and other historic permanents, Weatherlight gives us both a way to chip in for damage, and a means of card selection.

Next up is the The Antiquities War. This is a pet card of mine from Dominaria, and Rona gets to double dip with this card, thanks to her ability to recur Sagas. Digging for artifacts two turns in a row is powerful, and if we're able to get to the final chapter, we get to confront our foes with an army of 5/5s.

If we're feeling really courageous about that plan, let's throw in Mycosynth Lattice for style points. If we can play this before the final chapter resolves, we're going to be looking at our opponent's with an overwhelming army of 5/5s. However, this will be heavily telegraphed, so plan accordingly.

As long as we're discussing the Lattice, let's make sure we mention a few other pieces that have excellent synergy with it as well. Blue-black needs answers to artifacts and enchantments, and that's where we look to include board wipes such as Oblivion Stone and Nevinyrral's Disk. Once we complete the trinity with Darksteel Forge, victory should be around the corner. O-Stone is merely a one-time wipe, but the Disk is repeatable, and either should be good enough to set up for the endgame. This combo isn't unique, but it still should be respected as players may not immediately have an answer to indestructible artifacts.

Since Rona doesn't point us in a direction to a game-ending plan, we can choose almost any adventure we want. If we want to look for more combos, let's look at the Basalt Monolith and Rings of Brighthearth combo.

By copying the Basalt Monolith's untap ability, then tapping it for additional mana in between, we can generate infinite colorless manato feed into any spell we want, be it a tremendous Torment of Hailfire or my personal choice, a massive Walking Ballista.

The Phyrexian Devil's in the Details

Before we finish up, let's talk about a card that needs a special shout-out. Rona's Signature Cards section is one of the most lackluster that I've ever seen for a commander. Signature Cards are supposed to be a commander's unique and most intriguing spells, but Rona's section almost exclusively consists of cost-reducers (like Foundry Inspector) and trinkets (like Mind Stone).

Comparatively, Voyager Staff is only in 29% of Rona decks, and I don't think that's okay.

This card allows us to protect and reset Rona, and Rona allows us to recur it if we need to. It's a Swiss Army knife in this deck, and it needs more inclusions. If Rona is going to dig through our trash for gems, we should make sure we have gems like this for her to find.

However, that is the end of the article! I hope you've enjoyed it, and hopefully it got some of your gears turning on how to approach Rona. She's certainly a handful. As I mentioned above, viewing Rona in a different light is tough, so there's a bit I wasn't able to cover with her, such as the possibility of a blink subtheme.

Below is a prototype decklist for Rona, and I hope I have given you a little insight into what she does! Until next time! Thanks for joining me in the Underdog's Corner!