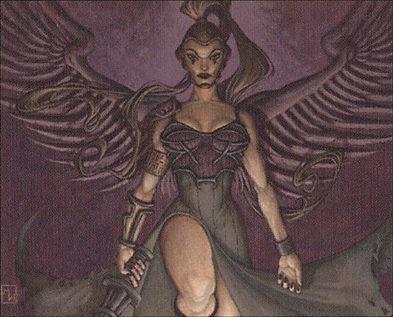 This article is Round 9 of the Underdog’s Corner, a series spotlighting various lesser-used commanders and their place in the format. Each article makes the argument for a single commander that deserves more play, as well as highlighting key cards and synergies.

It’s been too long, but I’m glad to be back! In this installment of the Underdog’s Corner, I try and equalize the featured commander’s color balance. So far, only one commander with black has been featured in this series, and I figured what better way to begin to balance the colors than to pick a legend from “the black set,” Torment. Pulling from the ever-present themes of self-sacrifice and “greatness at any cost,” this week’s commander is dying to get a chance to shine. She only has 121 decks currently listed of EDHREC, and she is the 11th most played black-white commander. Rise to the occasion and meet our newest entrant in our series: Selenia, Dark Angel!

Hailing from Dominaria, our newest entrant offers a very… unique style of gameplay. At first glance, I pushed the thought of even attempting to brew Selenia out of my mind. That was until one of my good friends explained her value. Value? What value could this commander possibly bring? A 3/3 flyer isn’t great for it’s cost, and her other ability seems very lackluster. At a glance, she seemed like a color-shifted, worse Wydwen, the Biting Gale. However, the more my friend explained how she worked, the more the idea latched onto my mind.

First and foremost, this ability lets us protect Selenia, Dark Angel from nearly all forms of removal. While she doesn’t have the greatest stats-to-cost ratio, she is still a resilient flying threat. That at least has some value. The real kicker for Selenia’s unique gameplan is the cost of her ability: “Pay 2 Life”. We can activate her ability over and over again to drain our own life total. Why would we do that though? Selenia’s whole gameplan revolves around the concept of life ultimately being a resource to further our own goals.

Life is a Game As I touched on a bit earlier, our life total is this deck’s ultimate resource, but how do we use it? Activating Selenia’s ability over and over lets us drain ourselves down to near zero, and then we swap life totals with an opponent. This puts our opponent’s life total in the red-zone, and from there it should be trivial to finish them off. Most of the prominent game-ending effects for the deck revolve around switching our life totals with another player.

Surprisingly, there is a decent density of these effects in the game, and each one makes it into nearly 70% of Selenia lists. Repay in Kind and Reverse the Sands, while expensive, are the hardest of these to interact with by being sorceries. Repay is especially strong for our strategy, since it’s able to hit each opponent, while Reverse lets us play politics and leverage each player’s life total according to that player’s threat. We also have some repeatable effects on permanents, such as Soul Conduit and Magus of the Mirror. These effects only target one opponent, but I think the added political element makes it worth it. Luckily for us, Selenia isn’t the only option we have when it comes to draining our life total quickly. Wall of Blood and Hex Parasite both appear in about half of the listed decks, but another option only appears in 8 of the 121. Unspeakable Symbol is probably most well-known as a signature card for Marchesa, the Black Rose, but being able to trade life for power is never a bad option. This card not only lets us drain our life total, but it can also turn Selenia into a threat with commander damage.

While swapping life totals gives us a redundant path to victory, that’s not the only way that Selenia can seize a win. One aspect of Selenia that makes me hesitant is how high risk/reward she is. We often rely on the survival of one piece or the resolution of one spell to claim victory, and losing it often spells our demise. No other card exemplifies this aspect of our game plan better than Near-Death Experience. As long as we’re at an odd-numbered amount of life, Selenia can drain our life total all the way down to one on our opponent’s end step. If we can protect ourself, we’ll walk away with a win. If you’re a fan of this card, this is probably the best general for you. It sees play in 86 Selenia decks which is seven times more than the next closest entrant. Another angle that the deck has is regaining all of the life lost in one go, but that seems counterproductive, right? With cards like Children of Korlis and Tainted Sigil, we can do just that. Tainted Sigil occasionally gains us more life than we personally lost, but both it and Children of Korlis accomplish the same goal which is to reset our life total once we have drained it with Selenia or our other pieces. We’re still missing a piece of this three-part combo, and we can finish it with any of three different cards: Sanguine Bond, Defiant Bloodlord, or Vizkopa Guildmage. While Vizkopa Guildmage hits each opponent, it does need consideration since its ability requires mana to activate. Our enchantment and vampire options don’t have this setup, but each is limited by only being able to target one player. If we gear our Selenia build to have a life-gain subtheme, we can take full advantage of these cards even when not threatening this unorthodox combo win. Despite covering several ways to weaponize our life-total already, we’re not done yet. Hatred lets us pay any amount of life to give a creature +X/+0 where X is the life we paid. Not only can we drain our life, but we can turn an unblocked attacker, like our commander, into a lethal strike. Phryexian Processor, combined with Children of Korlis, makes it trivial to create an army of gigantic creatures over time without much sacrifice. These two, along with Wall of Blood, let us use our life total to create a very large creature. Using these, we have another avenue to attack our opponents. While not needing the life investment like these do, Serra Avatar will also work in our favor just as well.

At the small cost of sacrificing one our gigantic creatures, we can potentially knock an opponent out of the game in one shot. Usually when people think of this immediate elimination by a deck centered around life, they think of our friendly death star, Aetherflux Resevoir. However, these cards are much less known.

Dying Wish needs a sacrifice outlet, but it lets us not only drain our opponent for a massive chunk but also recoup the life we lost. Rite of Consumption does the sacrificing for us for the same effect as Dying Wish. Despite being such a great effect for only two mana, it currently only sees play in seven Selenia builds. Considering that Hatred sees play in 40% of decks and Wall of Blood sees play in 50% of decks, I think that’s underplayed. This isn’t even the only card like this that we have access to. We get even more redundancy if we include Essence Harvest and Final Strike. Essence Harvest at least, sees some, if very little, play by being included in four decks, but Final Strike? It currently sees play in zero Selenia decks. Zero. I’m going to chalk that up to it being a card from Portal, but even then I’m shocked to see that no decks play it.

One thing that has probably stood out throughout this article is how vulnerable this gameplan is to removal or targeted damage. Fear not, for we have answers to that as well. Grand Abolisher and Conqueror’s Flail let us carry out our perilous plan with relative safety by allowing us to ignore our opponent’s interference during our turns. Each silences our opponents, leaving them helpless to watch as we drain the life from them. As an added bonus, the flail gives Selenia a small buff. If the game comes down to it, Selenia can slowly whittle down our opponents. Another thing that may have stood out is how we actually finish off opponents when we’ve drained them low on life. Any cards with extort like Blind Obedience or Crypt Ghast allow us to drain their final dregs of life. While a bit more dangerous to our own life, Pestilence lets us accomplish the same end goal when we’re closing the game out.

That’s it for this week! As usual, I can’t possibly cover every card that Selenia can leverage in detail, so I leave you with a list of other cards to look at and consider.

Thanks once again for joining me in the Underdog’s Corner!