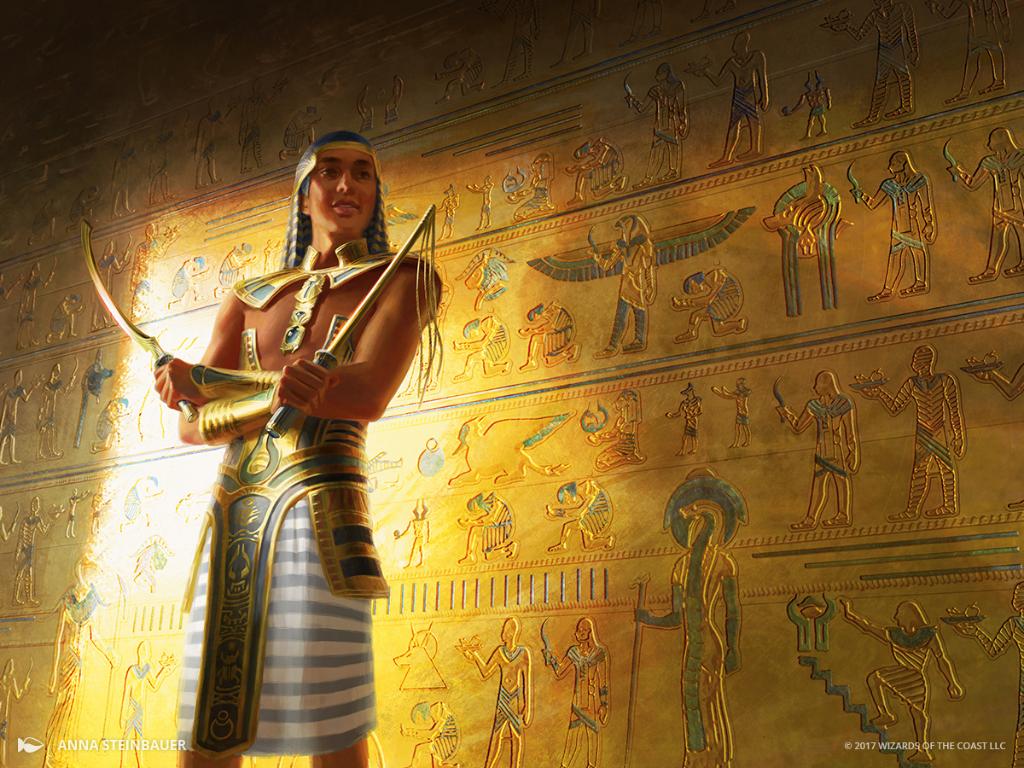 This article is Round 8 of the Underdog’s Corner, a series spotlighting various lesser-used commanders and their place in the format. Each article makes the argument for a single commander that deserves more play, as well as highlighting key cards and synergies.

Welcome back to another installment of the Underdog's Corner! The release of Amonkhet brought with it a variety of new legends: five mono-colored gods and four other multi-colored legends. Throughout "spoiler season" for the set, many of the legends received attention in one way or another. Hapatra, Vizier of Poisons immediately jumped ahead of the pack to become the most played among the bunch with over 130 decks already. Following her in popularity is Samut, Voice of Dissent, whose bevy of abilities has people referring to her card as a "keyword soup." Neheb, the Worthy gives minotaurs a tribal leader while also filling in as a discard-focused commander, and we have a new take on the god creature type with cards like Oketra the True and Rhonas the Indomitable. However, if you haven't guessed it yet, we will discuss Temmet, Vizier of Naktamun in this installment. As a commander, I didn't see much discussion on his potential upon his release, but he's starting to slowly gain traction. I think this is a good thing as our strapping young man brings a very unique set of abilities to the table. Let's take a look! Temmet is one of those commanders that I didn't "get" when he was first spoiled. My first thoughts were that he was a "stylish" commander, a legend that had a very unique ability or gimmick that wouldn't be too impactful. However, just like some other legends in this series, like Sek'Kuar, Deathkeeper and Arjun, the Shifting Flame, the more I considered his abilities the more excited I became about him as a general.

What about him excites me? At first glance, our young vizier isn't too impressive. He's only a 2/2 and his abilities don't affect himself. However, he only costs two mana to cast. From the get go, Temmet can be a thorn in our opponent's side, and his embalm ability let's us double-down on that redundancy. If we're willing, we can alternate between casting and embalming our young vizier six times before his cost jumps above six mana. Usually that kind of extended use would land a normal general in the "uncastable" range. So what about his other ability?

"At the beginning of combat on your turn, target creature token you control gets +1/+1 until end of turn and can't be blocked this turn."

Temmet gives one creature token a small buff and unblockable at the beginning of combat, which gives our commander a bit of direction. At worst, this allows Temmet to make himself unblockable if he's embalmed, but remember it won't count as commander damage. On the other hand, this let's us guarantee a good chunk of damage will connect if we're using larger tokens or if we find a way to buff our tokens. If we're so inclined, Strionic Resonator is always an option to double-down on Temmet's ability to launch two unblockable tokens per turn.

A Token of Appreciation

When originally mulling over how to build Temmet, my first thought was what kind of tokens are available in blue-white. 1/1s and 2/2s are fairly common, but even with Temmet's buff those aren't going to be hitting very hard. So what larger tokens are available? I won't lie, the main reason Temmet caught my eye was because I finally had a deck that would let me play Mirror-Sigil Sergeant. This card has always been a pet favorite of mine, and the rhino becomes a sizeable threat with Temmet's buff. Along with that, if it's allowed to stick around it'll slowly amass an army of tokens by itself. This is one of my favorites, and I'm very glad to see it being played in a third of Temmet decks. Reef Worm is another more popular option than the rhino, but I think that's to be expected. The wurm gives a resilient body that slowly becomes larger and larger. Eventually, we can end up with the 9/9 Kraken that Temmet can turn into an unblockable 10/10. That's a large chunk of damage coming through without resistance. Keeping on the sea creature theme, if we pay the surge cost for Crush of Tentacles we not only get a board wipe, but we also get a sizeable 8/8 threat. If Temmet is on the board, recasting him from our hand isn't a problem, and then we have a massive unblockable threat. These aren't the only token producers we have access to, and while these give us sizeable blockers, we have arguably stronger and more versatile options. Despite coming from Amonkhet, a world shaped into worship of Nicol Bolas, Temmet might have been a better fit on New Phyrexia. If you thought a 9/9 Kraken token was powerful, check out Phyrexian Processor. Allowing us to trade life for advantage is typically a black-based ability, but I'll gladly accept being able to do it in this deck. If we're willing to pay the price, Temmet can launch these massive tokens straight into our opponent's face. Even if we're playing conservatively with our life total, a steady stream of 6/6s or similar size is still a threat to be reckoned. Keeping up with why I think Temmet could secretly be a Phyrexian, Phyrexian Rebirth is another inclusion that Temmet loves to see. Very much like Crush of Tentacles, we get to reset the board while leaving a massive token in it's place. However, while usually opponent's are able to chump block this massive Horror, Temmet doesn't give them that option. Another token producer to round out our unholy trinity of Phyrexian cards is Mimic Vat. Not only do we get to deny graveyard strategies their key creatures, we get to turn them to our favor by benefiting from enter and leave the battlefield triggers and being able to freely attack with them. If you ever thought to yourself, "Man, I think I've seen embalm before..." look no further than Innistrad's Back from the Brink. Back effectively says all our creatures in our graveyard have embalm equal to their mana cost. If you've never heard of the card, don't feel too bad. Temmet is already the most popular deck using the card after two weeks. While it pains me a bit to exile creatures that could possibly be recurred in other ways, this gives us an extended toolbox to work worth with and more potential targets to become unblockable. One small benefit of this card is it actually let's us cheat on the real embalm costs of Temmet and other cards from Amonkhet, like Angel of Sanctions or Aven Wind Guid.

As we've seen with Back from the Brink and Mimic Vat, creating tokens of valuable creatures is a powerful endeavor, and with blue in our color identity we have a wealth of options. Cackling Counterpart lets us really go deep on using our graveyard as a secondary resource, allowing us to get multiple uses and copies out of one spell. Fated Infatuation and Followed Footsteps are other such cards that let us create a variety of different tokens. Rite of Replication almost makes Temmet an afterthought, as creating five tokens of the best creature on the board could end the game on it's own. One card that is a very interesting include is Stolen Identity. Cipher as a mechanic was always incredibly interesting, but it was hard to make work. In Temmet, it's solid Egyptian gold. Not only do we get a copy of the best creature on the board, we can then cipher Stolen Identity onto that creature token or any others we may control. If planned right, every turn we can create a new copy of any artifact or creature if Temmet or other unblockable outlets like Thassa, God of the Sea are sitting around. If we're not feeling up to creating a steady stream of tokens, Clone Legion let's us go all out by copying the strongest board presence at the table, even if it's our own.

Rise Among the Worthy

So how do we guarantee we're going to make our opponents hurt? We only get to make one token unblockable a turn with Temmet, so we need that token to count. One card that I think is critical for this strategy is Swiftfoot Boots. Hexproof and haste are invaluable when we're creating a single high value creature. With the boots being a priority in my mind, I see no reason not to dip into more equipment as our colors support it very well. Temmet's tokens carry equipment very well, and that is a good enough reason to consider equipment that gain value from dealing combat damage to players.Sword of Light and Shadow is probably the most high profile equipment available, but this aren't the only option. Bonehoard and Scytheclaw not only come with very powerful effects, but they also bring along their own tokens. With the aforementioned boots, we can launch these living weapons straight away without having to hope that they survive around the table. Quietus Spike is effectively a second copy of Scytheclaw and really lets up pressure our opponents, especially those with a lead. Even the humble Fireshrieker allows us to crank up the hurt to our opponent's, and with Temmet clearing the way for our heat-seeking tokens, Inquisitor's Flail becomes a deadly threat without much of a downside. While we're guaranteeing that one creature can make it to our opponent, what if that's the only creature that can get through? Luckily for us, there's a mechanic that let's us take advantage of this: exalted. It's very fitting that a plane whose tagline is "Rise Among the Worthy" is able to champion the exalted ability. Sublime Archangel is seeing play in about half of available decks, which isn't too shocking. If we choose to go with a token-focused approach, the archangel gives our single token a massive boost. Keeping on the the exalted theme, I'm surprised that there's only one deck currently running Sovereigns of Lost Alara. I think there is potential value in being able to tutor powerful auras like Eldrazi Conscription or Angelic Destiny into play on a whim on an unblocked creature. Just like how we have powerful equipment support, blue-white also supports auras incredibly well with cards like Nomad Mythmaker and Arcanum Wings. There are even cards that support both strategies like Hanna, Ship's Navigator and Sram, Senior Edificer. I think either strategy offers a powerful subtheme.

One last thing before we conclude the article, while I talked particularly about how Temmet creates unblockable creatures, he is far from the only source available in our colors. Thassa, God of the Sea is a resilient body that can give unblockable, as well as having a passive Scry 1 on our upkeep. Venser, the Sojourner makes it so our entire board can't be blocked at the cost of a loyalty counter, and Open into Wonder let's us turn multiple attackers not only into unblockable damage, but draw power as well. Aven Wind Guide doesn't quite give our board unblockable, but flying and vigilance for all creature tokens can be a very real threat.

While I touched on many cards in this article, there are still so many that I didn't get to discuss. I listed out a few suggestions, but I encourage you to look into Temmet, Vizier of Naktamun to really dig into the potential he has. Keeper of Keys is one such card.

Until next time, thanks again for joining me in the Underdog's Corner!