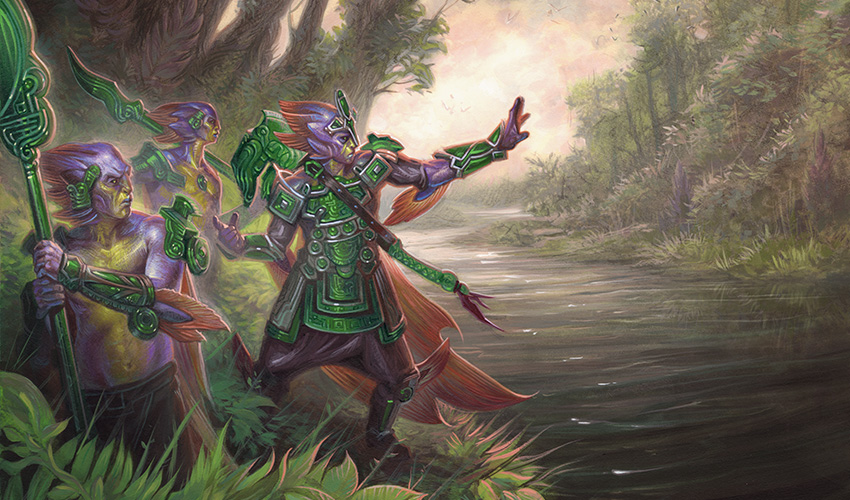 Hello, everyone! Welcome back to another edition of the Underdog's Corner! As we move closer towards the release of Dominaria, I thought to look back on the last block, Ixalan. This week's entrant is one that always seemed powerful, but never received a lot of attention. I certainly never gave it much attention when comparing it to other legends of the block. However, when comparing her to the other Simic generals, she actually falls towards the very end of the list, only pulling ahead of mono-Thrasios, Triton Hero and mono-Kydele, Chosen of Kruphix. Get ready for a booming display from this week's chosen underdog: Tishana, Voice of Thunder!

Tishana, Voice of Thunder was a really interesting, albeit simple, general upon release. Part of her interest came from her not being a 'Merfolk-matters' general. Yes, Merfolk want to go wide and she rewards that, but at first glance she doesn't even support their mechanical themes of being counter-based. This was mostly solved by Kumena, Tyrant of Orazca as he now helms most of the Simic merfolk decks. However, while Tishana was left behind by the de-facto choice for merfolk, she is not forgotten. Tishana doesn't really create a new space mechanically, but what she does offer is a powerful engine in the command zone. Let's check out why:

Tishana, Voice of Thunder's power and toughness are each equal to the number of cards in your hand.

I'll cover these two at once. Tishana is a classic Maro: her power and toughness are based on the number of cards in your hand. This alone doesn't seem worthy of being a choice for a commander, but just you wait.

You have no maximum hand size.
When Tishana enters the battlefield, draw a card for each creature you control.

I'll cover these two at the same time. When Tishana enters the battlefield, we draw cards. That alone is powerful as Prime Speaker Zegana has shown. Compared to Zegana, we have to establish a wider board presence compared to needing only a single, powerful creature. Once we swarm the board though, we can play Tishana and refill our hand to either be ready for an incoming wrath or rebuild after the fact. Also, thanks to Tishana giving us no maximum hand size, we don't need to worry about if we're drawing too many cards. For our purposes, this is going to be important as we're going to aim to accelerate our general out as quickly as we can.

O Mana, Where Art Thou

Here lies the backbone of our strategy: mana dorks. I always joke about wanting to build a "mana dork tribal" deck, and Tishana, Voice of Thunder is a great candidate to lead our mana-producers into battle! Well, maybe not battle, but she facilitates the strategy which accelerates us quickly into Tishana or any other world-beater in the deck. Tishana's place in the deck will primarily be to refill our hand whenever our fragile board-state is wiped away. Llanowar Elves, Elvish Mystic, Boreal Druid, and Birds of Paradise are going to form our strategy's foundation. A turn one dork is going to be one of the better plays in our deck, as it will allow for further ramp from the likes of Cultivate or Kodama's Reach on turn 2.

While these one-drop dorks are going to be crucial, we cannot solely rely on them to bear the burden of what we're going to need. We're going to need to fortify our mana-curve at higher converted mana costs to ensure that we can a critical mass of production.

Thanks to Wizards of the Coast's development of elves as a tribe, Elvish Archdruid and Priest of Titania are almost snap includes since most low-cost dorks come in the elf variety. While this is not going to be a full-blown elf-tribal deck, these can still pull their weight even if they're functioning outside of their true potential. Somberwald Sage is always a polarizing card for me, but I can resist the idea of playing a dork on turn 1, playing the Sage on turn 2, and then playing Tishana on turn 3. While that may not be the most competitive line that this deck can muster, it still is an exciting reason to consider Tishana.

One of the ways Tishana pushes our deck-building is to create an environment where we can draw a substantial amount of cards when she is cast. Luckily, she is a green commander which lets us cast a wide net for token generating options. However, one thing I noticed about some of these is that they fit into two different categories: consistent and one-shot.

Consistent token generators can generate tokens over the course of several turns. These occur in a number of ways, and the variety allows us to not to be forced in a particular direction. The newly minted Tendershoot Dryad is an absolute all-star. In a four-player game, the dryad will be responsible for five total bodies, each of these which equates to another drawn card for Tishana. Things only get worse from there if it's allowed to stay on the board longer than a turn or even a round. Fable of Wolf and Owl is a more fun inclusion, but generating more bodies and tokens off of our numerous creatures sounds great. Curving the enchantment into Tishana also allows us to nearly guarantee drawing three cards which seems decent enough to me. Next up are mana sinks such as Ant Queen. We're planning to generate tons of mana and accelerate into our bombs early. Ant Queen allows us to pump any spare mana or all of it into its ability to create a growing army of tokens.

Next up are the one-shot options. These aren't consistent as more of an instant board presence in a single card. Wolfbriar Elemental is one of my all-time favorite cards, and I get giddy thinking about kicking the elemental four or five times for an entire army of wolves. Things can get crazier than that though with the right set up. Next is the perennial EDH staple, Avenger of Zendikar. Do you like playing lands? Do you like getting a token for those lands? Do you like buffing said tokens for playing more lands? Play this card. Next up is a card that one me some of my earliest games in my EDH career. Hydra Broodmaster is an incredibly potent token generator, and once we get into the ludicrous amounts of mana generation the hydra can easily end games. Three 3/3s is fine, four 4/4s is great, and five 5/5s is even better, and it keeps scaling up. If we can somehow generate infinite mana... well, you get the drift.

However, Intruder Alarm is arguably even more brutal in this deck as we have so many ways to generate tokens. The aforementioned Ant Queen, for example, goes infinite with any set up where we can generate two mana. There's not anything complicated about it, but it's sure to cause waves.

One thing that I attempt to do everything I create a deck is to try to cram a devotion package in it. I tend to play permanent heavy decks, and often the logical leap (to me) is to add devotion cards that will only add to a deck's power. Luckily for me, and you, this is one of those decks where that might actually work. This deck is so heavily green that there's no good reason to exclude Nykthos, Shrine to Nyx as it will certainly always generating a net positive amount of mana. If that's not enough, we can also include the creature version of Nykthos, Karametra's Acolyte. While four mana is a steep price to pay for a mana dork, there are too many situations that this deck can create where this student will be generating mana way above her mana cost. It's truly a powerful thing to admire once we kickstart the engine.

The Calm After the Storm

That is it for this week, ladies and gentlemen! I hope you have enjoyed a trip down this recent-memory lane, and I hope I was able to spark a renewed interest in a legend that may have begun to fade from memory. I think Tishana is a powerful legend to have sitting in the command zone, and I wish all of her pilots well-wishes and plenty of cards-drawn.