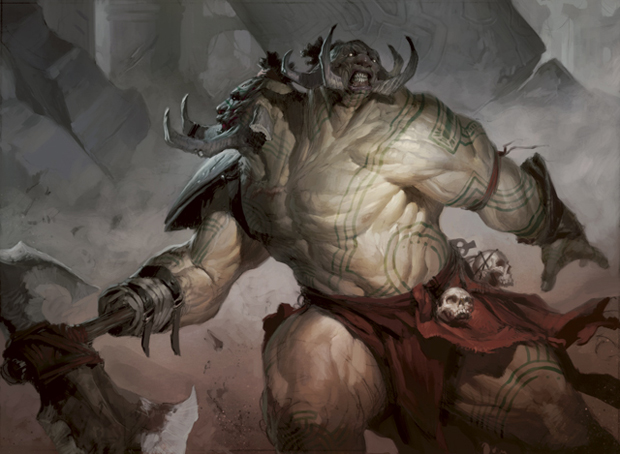 Hello all and welcome back to Weird Harvest, the column that’s committed to keeping commander janky. Last week we fulfilled a reader request for a tribal treason deck, but this week I wanted to shift gears and try something that some of you may have never seen before. I’m sure that most of you are aware that if a deck is seated in blue, then it has control elements. There is, however, a way to build a control deck without having blue at all. Now that will catch some people off guard! The question is, who could we use for our non-blue control general?

Say hello to Ruric Thar, the Unbowed, Gruul’s answer to annoying spellslinger decks. A quick inspection of the stats show that we have an on-curve body for 6 CMC with two very relevant abilities. We are a bit lacking in evasion, but we more than make up for that with our impactful ability. As you can see, he only has one theme available for him right now. Tribal werewolves sound interesting, but it’s not really in the spirit of what we are trying to do here so we will get no help here today. Instead we’ll follow the rabbit down the hole chasing a pair of my favorite non-blue control cards from the past. They will serve as the guiding light for this build. Hall of Gemstone: This card is fantastic! I can’t tell you how many times I’ve seen this just absolutely tilt a table and throw everyone off their strategy. With 854 decks utilizing it, I think it’s safe to say that this control card needs a bit more exposure. Smoke: While not the most devastating control card ever printed, it’s certainly an efficient one. This is a prime example of how off balance the color-wheel was back in the beginning. Luckily, we play in a format where we can give misfit relics like this another chance at notoriety. There are 1212 decks running it now, so it’s nice to see this veteran isn’t completely forgotten.

Now we can search both cards out and look at the subsequent recommendations that they yield for us. As we scroll through the “Top Commanders” section on Hall of Gemstone, we can see a recommendation that is a no-brainer for us. Dosan the Falling Leaf: This card is a City of Solitude on a 2/2 body for 3 CMC. It’s amazing to me that he’s only used in 46 decks despite how relevant his ability is to combat control magic. Speaking of City of Solitude, let’s run that. City of Solitude: This card is one of my favorite old-school anti-blue cards. Before there were narrow options like Choke, there were slightly more subtle options such as this. It’s used in 1,024 decks, and that number could double right now and I wouldn’t be surprised.

Now we can search Smoke and see what recommendations it yields. We don’t have to scroll down for very long before a couple of winners appear. Under the “New Cards” section we have an awesome suggestion with Crimson Honor Guard. A little farther down we see another of my favorite anti-blue cards, Price of Glory. Crimson Honor Guard: A 4/4 trampler for 5 CMC is respectable on its own. The ability, however, is what makes this card such a piece of taxation gold. Taxing someone for 4 life because they don’t have their commander is excellent. This card has the potential to force incremental life loss and some very bad decisions if anyone is playing too loose. With 234 decks using it, I have a feeling we will watch this number continue to increase. Price of Glory: One of the most devastating things you can do to a blue deck is to force it to play on its own turn. Most of their power is derived from the ability to keep their mana open and capitalize on the moments of opportunity as they arise. There are currently 2679 decks that understand this, and we are going to be one of them.

We now have the skeleton of our non-blue control deck, so now we just need to decide upon what we are going to add to round it out. I’ve always wanted to build a Primal Surge deck for commander. I’ve played against them, but never took the time to build one. I feel like it could work here because Gruul (Red-Green) control elements usually lie on creatures or enchantments. If we make Primal Surge our only non-permanent card in the deck, essentially, we can run it as a win-con given that we have enough haste enablers. This shouldn’t be too much of a problem since we are on Red. Here’s the list that I came up with.

It’s important to note when you are building a non-blue control deck that we are most effective when we are threatening our opponents on multiple vectors. What this means is that we increase our leverage against our opponents by making sure that we aren’t narrowly focusing our control elements. We could just as easily run a land destruction deck, which would certainly make life hard for a blue deck, but it would be narrow in focus and not give us a good board presence. Instead, we run some taxation cards to keep the life totals in check and slowly counting down. We run some rule changers to make sure that everyone else plays by a different, less fair set of rules. Then we run some massive bombs to blow the game out because we are Gruul and that’s what we do best. This isn’t the only example of how you can take a type of deck like Gruul Stompy and jank it up by shifting the focus of the archetype. I would love to hear some of your stories about doing something like this. Perhaps this article gave you some inspiration to do something similar with a different commander? As always, feedback and comments are appreciated. Until next time, keep on tapping in the free world.