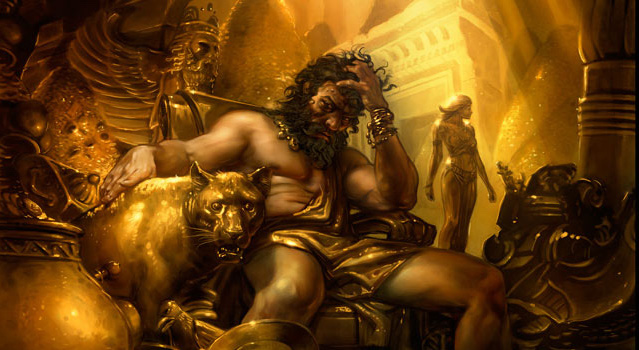 Last time on Weird Harvest we explored the new lands of Ixalan with Captain Lannery Storm. This week I thought we would do something a bit different and step away from red and cover a mono-colored deck that is similar, but different enough in focus that it isn't a rehash. Who needs to turn trash into treasure when you have the Midas touch? Get ready to experience the ecstasy of gold with King Macar, the Gold-Cursed!

I must say that the design of this card is a bit quirky even considering the block that it came from. We have a 2/3 for 4 CMC, which isn't horrid but isn't doing us any favors either. Our ability is Inspired, which means we must untap him to get it to trigger. Luckily his upside is awesome. We get to exile a creature and create a gold token. Much like Captain Storm's treasure mechanic that is prevalent in Ixalan, the gold token gives us mana acceleration but without having to tap the token first. The ability to generate mana on the backend of removal can't be underestimated. He has only 185 decks on file at the moment, with 40% of them being artifact themed. Let's see if there's something in there that we can work with, shall we?

The most immediate concern for us to address is how to enable his ability. For this general to work, we must have a good mix of cards that allow him to tap and untap meaningfully at will. There are quite a few options to explore, but there is no disputing that most of them are artifact based. Let's look at some cards that will help us accomplish this. Honor-Worn Shaku: This card is terrible. I can't deny it, not even a little bit. However, with the king's ability it becomes a premier mana rock because we can effectively tap this for 2 colorless in a turn. That's not too bad considering the trigger that comes after and it's in line with our ramp and kill strategy. It's used in 567 decks now, and not surprisingly Norin, the Wary and King Macar, the Gold-Cursed are the top two commanders that use it. Smuggler's Copter: The former scourge of standard is sweet when used with the king. We can tap him to crew the copter and go loot for some more cards that can put us in front of the rest of the table. It's utilized in 2668 decks, and you can rest assured that this card will see a steady increase in play given its versatility. Untethered Express: In case you haven't figured it out yet, the Inspired mechanic has excellent synergy with the Crew mechanic. This sweet ride gets bigger every time it swings and it crews for next to nothing. Turning on a bomb and then untapping the king to punch a hole for it is both insult and injury. It seems 658 decks have picked up on the fact that this uncommon is a worthy closer in the right build.

Give me some sugar, baby.

So now that we have the basic gist of tapping the king to turn on some of our artifacts, we can begin to really dial in some synergy to flesh out the deck. We already know that a good chunk of the deck is dedicated to making our commander playable, which means the slots that don't fulfill that purpose should be carefully weighed. These cards must really bring home the value and add synergy to the overall strategy to make up for the king's treasure stash. Since we have a lot to gain by going heavy on artifacts, it would seem a no-brainer to go the Paradox Engine route given the Inspired mechanic's direct synergy with it. I don't really like that approach in this build, however, because the Engine tends to restrict our card choices quite heavily as we must devote slots to breaking it. Our slots are already leased up for making the commander good, so we run the risk of building a fragile and narrow deck this way. There are some options though. Check some of these out. Unwinding Clock: When utilized with Mycosynth Lattice, Silverskin Armor, and Liquimetal Coating we gain the potential to turn our commander into a machine gun. This can really clear a board out and demand an immediate answer. It also gives us the ability to constantly have access to our mana rocks throughout each turn, which is a huge bonus. It's ran in 6,349 decks now, and you can bet it feels broken in each one of them.

Panharmonicon: I'll openly admit that I have a tough time not putting this in any artifact-heavy build. I feel more justified using it in this one because black has so many fantastic options for it. This card sends Rune-Scarred Demon, Duplicant, Noxious Gearhulk, Gray Merchant of Asphodel, and many others into overdrive. This card alone can go a long way in ensuring that we net as much value as possible from our choices. It appears that 11195 decks have found that value town has a name, and that name is Panharmonicon. Strionic Resonator: If you aren't fresh to the format, then you know what this card does. If you are fresh to the format, do yourself a favor and start playing this card immediately. Don't just jam it into any build, but really make sure that you've piled in some meaningful triggers to target. We'll be looking to copy King Macar's ability along with Myr Battlesphere, Razaketh, the Foulblooded, Sidisi, Undead Vizier, and Rune-Scarred Demon. It sees use in 10735 decks currently, and it has reached all-star status as a value oriented artifact like the one's above.

This, is my BOOMSTICK!

Now that we have our value package taken care of, we need to focus on breaking our synergy down by pairing. Understanding our lines of synergy is the only way we have a shot at winning a game with a build like this.

Some work better than others, but there are diverse ways throughout the game for us to leverage our ability to tap and untap our targets for maximum value. Our primary game plan is to keep everyone else's board state clean, and with the above synergy we should have a good shot at it. We have repeat removal with King Macar, the Gold-Cursed, Avatar of Woe, and Royal Assassin. We have repeat ramp with Magus of the Coffers. We have repeat recursion with Coffin Queen, which can also function to exile a creature from a graveyard in a pinch if we need it to. With the main lines of synergy sorted, we can now look at the full 99.

What we're left with after all our slots devoted to enabling our commander and our value multiplier slots is a list that can fall back to board control and brute force if it needs to. We have a fair mix of flying and trample for evasion, with a light sprinkle of menace. This ensures we can get the damage in if they somehow produce targets that the king can't dismiss to treasury. We have Torment of Hailfire and Exsanguinate so that we can sometimes tutor in case of emergency and just close the game with huge mana input. We have a keen focus on mass removal, with two instances appearing on creatures. This is critical because, while we can spot remove with our commander, there will be times that an immediate reset of the board is our only way to stay in the game. We aren't the fastest deck by any means, so it is very possible for a deck to go wide with many creatures/tokens and completely devalue our commander's sweet ability. We'll have to watch out for any deck that is Red-White backed, as the Boros guild tends to pack enough artifact hate to deal with us. Hopefully we can draw and tutor our way to a Mycosynth Lattice or Darksteel Forge before they can put the hurt on us and discourage such disobedience. I hope you enjoyed King Macar, because I sure did. I think the notion of an artifact heavy mono-black build is cool. I don't think it'll be the scourge of anyone's meta any time soon, but then again if you're reading my columns then you aren't really gunning for that slot to begin with. Until next time, keep on tapping in the free world.