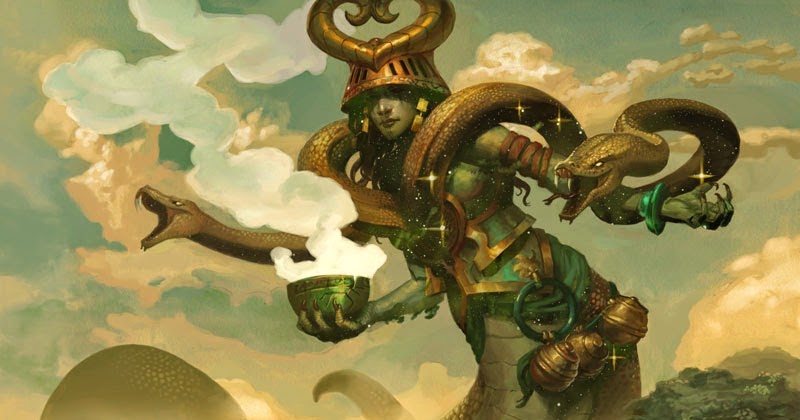 Hello everyone and welcome to the first installment of Weird Harvest. Over the course of this series I hope to impress upon all of you one of my favorite elements of EDH, and that is using jank during our build process to disrupt our opponents. You may ask yourself, “Why would I ever intentionally put jank into any deck?” There are several reasons you would want to do this, but let’s cover a few of the most important:

These reasons are at the top of my list as to why I build and play these types of decks. Now that we’ve established why we play and build this way, we’ll cover briefly how to identify jank.

There are several types of jank, but perhaps the most common types are the following:

We will focus on each of these over the course of the series. To kick things off, I figured we would start off easy with a janky commander. One of my favorite is Pharika, God of Affliction. She isn’t a janky commander by herself, although her ability is widely regarded as underwhelming considering her competition within her guild. Luckily, most people seem to overlook the fact that we can give anyone snake tokens. This can be leveraged politically if we dig deep into the archives of misfit EDH cards. For inspiration, we need only to look towards the stars. See what I did there? I know, that was a bad constellation joke.

Sway of the Stars

Pharika was printed during Theros, and has tons of synergy with the constellation mechanic. Enchantments in general can be leveraged quite well with some of her common counterparts. If we seek to make a political statement with our snakes, we should start here.

Part of playing politically is shaping lines of playing and changing the rules of the game. City is effectively Defense Grid as an enchantment. Nothing shapes lines of play in a control centric format like forcing people to play on their own turn. According to EDHREC, this card is in 826 decks. Pharika doesn’t even show up on its list under any category.

Cards like this signal that a group hug effect is occurring. If we aren’t aggressive with Pharika’s ability to shape the outcome of this card early on we should be able to keep the heat off us. It sees play in 90 decks, and I think personally this should be much higher.

Broadcast threats are a terrific way to shape and manipulate play. This card has an effect that is way off color and works great with our token generation. Being able to politically assassinate problem artifacts is a great bargaining chip. At 544 decks, this card is seeing some low play statistics despite the insane effect.

Now that we have some great enchantments to help synergize with our natural synergy with Constellation, let’s look at some ways to really put our political shenanigans over the top.

Artifacts are an essential part of EDH play. There are tons of artifacts that have insane impact upon how our opponents play the game. Check these out.

Given that we can control whether a player triggers this card or not with both enchantments and creatures with our tokens, this card stands to be one of the most powerful political cards in our deck. At over 1074 decks, I’m shocked it doesn’t just naturally show up in Pharika’s list of usual suspects given the synergy.

Like Ward of Bones but specifically only applicable to creatures. With only 405 decks utilizing it, I am thinking it suffers from obscurity and needs some time in the spotlight.

War tends to happen naturally when the implements of destruction are distributed freely. We get to give even more creatures for our enemies to battle with while having some cute synergy with Ward of Bones and Portcullis. Early on, it merely signals that we are peaceful group hug Golgari players. A worthy smokescreen indeed. This card sees play in 845 decks now, and it’s safe to say a good amount of them are politically based.

Adding these cards to a more traditional Golgari style EDH build is a surefire way to jank up our deck and keep our opponents completely off the scent of what we are doing. Now we can focus our attention on Creatures, Instants, and Sorceries.

We know that we need to synergize our natural ability to aggressively control the board state while shaping the flow of decisions that our enemies make. Let’s look at some ways to do this with the remaining card types.

This card is way undervalued. Being able to pitch two cards to turn all of someone’s lands into 3/3 creatures is insane. It goes so well with mass removal as well. It even synergizes with our Ward of Bones and Portcullis lockout strategies. At 57 decks, this card should honestly see more play in Golgari style builds.

I can’t say enough good things about this card. It’s got fear, which is a potent form of evasion. He recurs himself automatically. Oh, and he has No Mercy stapled onto him for good measure. He’s a surefire way to keep people from wanting to aggress on us. He sees play in 1226 decks, and there’s a good reason for it.

Nothing gets the salt truck rolling like a one-sided board wipe. We can leverage our ability to aggressively police everyone’s graveyard to make this card feel broken. This card can be the game closer under the right circumstances. With 8,422 decks using it, we can safely say it has achieved all-star status.

We’ve got some great shenanigans on our side, and now we can round it out with some usual suspects for the guild to make sure we can be competitive in any situation. Here’s the rest of the list I came up with.

That’s it for our first installment. I look forward to brewing some new jank with you all in the future. Feel free to comment any ideas you have that could help the deck or even ideas for future articles. Until next time, have fun and be excellent to each other.