Weird Harvest — The Gods must be Crazy 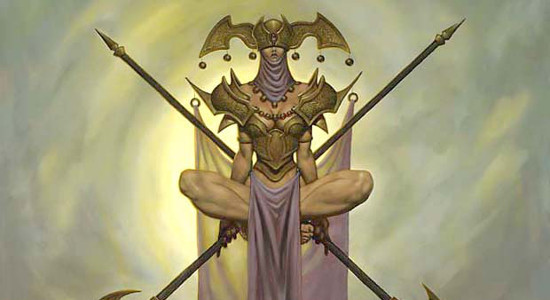 Happy New Year everyone and welcome to the first Weird Harvest of 2018! I’m extremely excited about all the new jank we’ll be getting in the coming releases, but to kick things off I figured I would make one last Onslaught block EDH deck. I want to try to tackle a subject that is both super janky and completely absent from my builds until now. When discussing janky archetypes and commander’s I can’t think of anything better than 5 color decks. Running a WUBRG (white/blue/black/red/green) color identity is tricky because it can be very hard to balance. I wanted to take an existing archetype and put my own spin on it, so let’s not waste any more time. Welcome to Karona, the pinball god! 5 Color in the Corner Pocket

Well this is a cool piece of cardboard. For 6 CMC, one generic and WUBRG, we get a 5/5 creature with haste. I love it when we get a janky ability printed right on the commander. It’s just a clever way to start a janky build. At the beginning of each player’s upkeep they will untap Karona, False God and gain control of it. They also get a pretty sweet tribal bonus in the way of a +3/+3 boost to a creature type of their choosing. I figure this goes great with the recent rash of tribal decks that have appeared since the most recent preconstructed commander decks. To make sure we aren’t outed by our own commander, which by the way would be humiliating but still well within the realm of jank, we need to take some precautionary measures.

Seriously, this gives us stout blockers that can ensure that if we are attacked we don’t lose resources. It entices the controller of Karona to channel their aggression towards a far better target, anyone but us.

To do this, we must really dig into the annals of janky Magic enchantments, but no worries there.

Once the bunker is constructed all we must do is sit behind it and watch our enemies literally kill themselves. I’m a huge fan of letting others do my dirty work for me. In fact, someone else is typing this as I dictate. I’d pay someone to do that for me too, but the other college kid called in sick, so I had someone else fire him for me. Moving on.

Let’s get things started by talking about our pillow bunker in detail. We have a killer mix of cards to ensure people stay focused on each other. Now I know this is usually where folks grab their Propaganda and Ghostly Prison and call it a day. That simply won’t stand in my column. Those are fine Magic cards, but they are far too straightforward, and who wants that? Don’t answer that, or else I’ll have to get someone to rework my 99.

Energy field/Web of Inertia + Rest in Peace/Leyline of the Void: Fantastic. I love hard lockdowns. This one works in two ways. First it keeps us from being attacked, which is kind of the whole point. Second it shuts down our opponents' graveyard. This is always beneficial in EDH as there are several nasty graveyard decks.

Collective Restraint + Land Tax: It’s not the most elegant synergy ever conceived, but it’s strong enough to ensure that we have all our basics out. This makes us hard to attack with cards like Sphere of Safety to back us up. Even if they do get to attack, we are protected by an army of indestructible blockers that are fueled up to be creatures by enchantments such as these.

These synergies are stout when paired with some other cards that are typical to the enchantress archetype. Cards like Greater Auramancy, Privileged Position, and Sterling Grove are staples at this stage of the game if this type of deck is your thing. Now we're ready to view the impending war in absolute safety. With the bunker in place it’s best that we focus on getting the most out of our commander. Our main goal in a pinball Karona build is to send her around the board forcing our opponents to kill each other once the defenses are up. We are all aware of what Assault Suit does at this point, so that’s certainly going in. There are, however, some other great options to do essentially the same thing. I give to you the Vow cycle.

These are some janky cards by design, so already I’m in love with them. Outside of that, they are just perfectly in line with our strategy. They are going to get Karona, in fact we are counting on it. These just make the end come that much quicker. If you hand an opponent a 5/5 with the potential to be an 8/8, they’re going to attack whoever is the closest to being outed more than likely. Even if they don’t, we still win because they are damaging someone that isn’t us. The vow’s take that and magnify it with each one we stick on. With our pseudo Voltron elements in place, it’s time to apply the finishing touches.

All EDH decks must abide by the tenets of card advantage, efficient removal, and mana acceleration. Our deck is no exception to this, so to satisfy these standards I included some staples to both the format and the archetype.

Since we have so many enchantments with our gods we get to abuse some of the better enchantress cards. Notably the ones that shield our fort pieces and protect what we work so hard to build up. With the gods these protection cards pretty much put us on the Boggles (hexproof/indestructible) game plan, which is a beautiful place to be in this format. We also get to run some of the more fun combat altering cards like Grand Melee, Bident of Thassa, and Basandra, Battle Seraph. At this point you are probably asking yourself why anyone would ever want to construct such a financially cumbersome pile of jank. Simply put, because we can.

I would like to leave you with something to ponder as we bring our first article of the New Year to a close. This game, and more specifically this format, are designed specifically with fun in mind. With so many unique cards at our disposal, the push to be creative and express yourself through your designs and playstyle is obvious. If you choose not to run anything off the beaten path, then more power to you. I’m certain that my articles aren’t your thing and that’s totally cool. It does seem like a missed opportunity though. When this format started out it was wide open. Nobody knew exactly what interactions would be dominant. There was limited valuation of what was “broken”. It took time, and more importantly, creativity on the part of the players to help guide these concepts as the format developed. That time isn’t over as our format is unique in the sense that singleton design restriction encourages us to persistently experiment and evolve as new cards continue to be released. Please, for your sake and the sake of the format go do something outlandish. Play a card or an interaction just because it’s fun. Try something because it sounds cool. Dare to be different. You don’t have to do so at the cost of universally recognized good deckbuilding guidelines. You can adhere to them as well as forging a new path. It requires effort, but the rewards are something that can’t be replicated through imitation. Until next time.