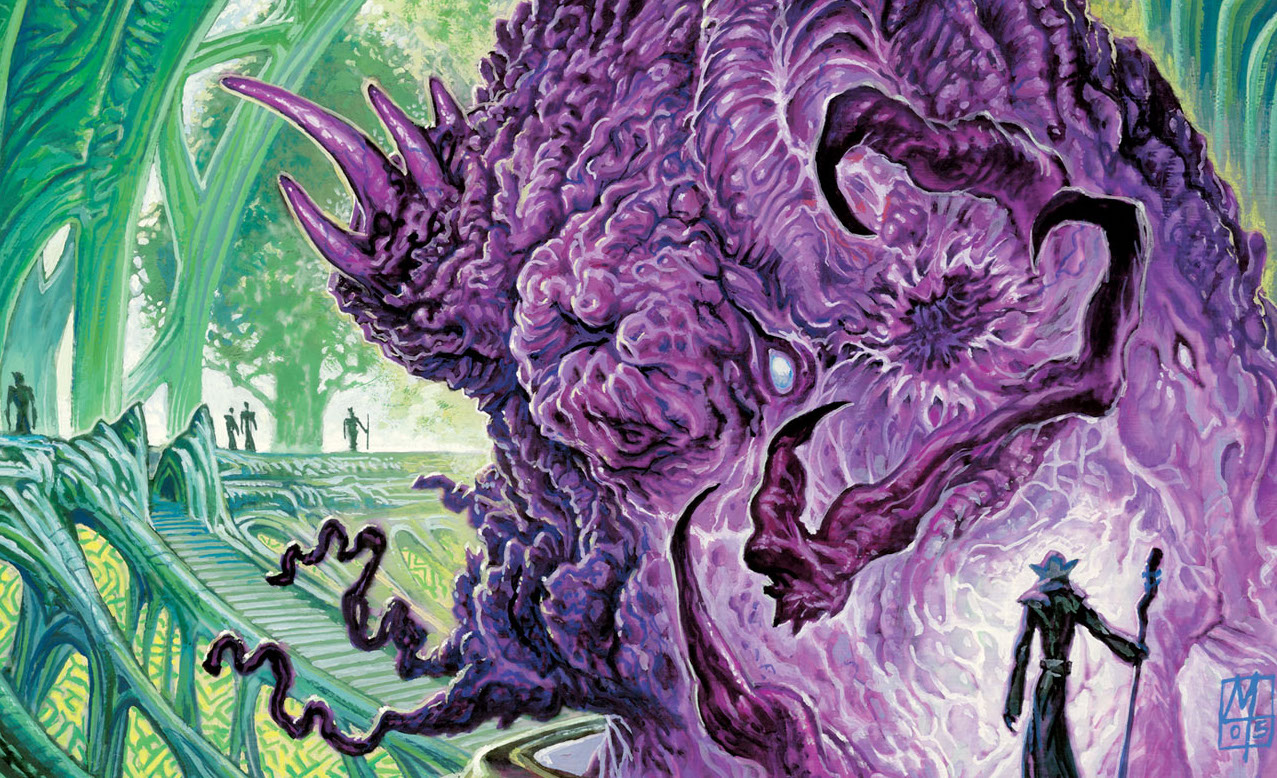 Hello everyone! Welcome back for another Weird Harvest, where we strive to keep EDH janky. This week I’m going to do something I haven’t done in a while and really step outside of my comfort zone. As you’ve likely gathered I’m mostly an Abzan mage, and I lean very heavily on the Orzhov removal package. I have an affinity for Grixis as well since the Dimir control package is so good. If I’m recurring in any capacity then I love my Golgari recursion package. One thing I certainly don’t like is Simic. It’s nothing personal I assure you. It’s just a playstyle that doesn’t speak to me when I’m sitting down to brew a deck. However, no brewer improves without pushing their boundaries and going outside of their box. This means that in order to reach the next level, I’ll have to Evolve. Well this is certainly way outside of my normal fare. This commander is expensive. It’s also more geared towards a pubstomper approach. That’s not to say we can’t make it work. We’re just going to have to put in some work to ensure that we get the maximum benefit and mitigate its risks. Let’s look at the breakdown of its strengths and weaknesses.

With the pros and cons identified, it’s now up to us to brew a 99 that can help us take full advantage of what we’re working with. I wanted to do something different this time and address each section specifically in an effort to offer you a more comprehensive understanding of how this deck works.

Ramping and fixing is what green does best. We have to include several sources if we are to minimize these two issues. Fast mana fortunately synergizes with our commander, as there are several creatures that can combo with its ability. Let’s look at our ramp package.

You’ll likely notice a lot of untap land effects, and that’s purely intentional. Activated abilities that untap lands are perhaps some of the easiest to “go infinite” with in terms of mana production. Cards like Magus of the Candelabra and Krosan Restorer also allow our commander to become a tap to untap engine, which is excellent. We have Fertilid to cull our basic lands from our deck once our mass mana production engine is online to ensure that we draw as many relevant spells as possible. The basics of infinite mana require some form of land untap ability such as Magus or Restorer and an untap ability such as Pili-Pala or Morphling. There are multiple combinations of these abilities to ensure we have backups once we inevitably receive hate for it.

While our commander won’t be wowing anyone with its stats anytime soon, we can ensure that when needed it can one-shot opponents. Luckily, most of our combo pieces allow us to not only generate infinite mana, but also get infinite +1/+1 counters in the process. You see, as long as we are creating more mana than required to untap Kraj we can essentially float enough mana to tap for the counter and then untap without stopping the mana generation process. This not only works with making our commander, or any other creature we control for that matter, a one-shot sniper but it also works politically. Say one of our opponents attacks someone that poses a problem for us. Once they declare blockers we can essentially target the unblocked creature with our commander’s +1/+1 counter ability and buff them as large as possible so that they do our dirty work for us. Ideally the game should be ending once we get to the point where we can go infinite, but there are times in a game where executing the combo as soon as possible isn’t a good idea. That’s where we would want to leverage a political maneuver such as this. It could work depending upon the game as a broadcast threat as well. This will vary ultimately based upon matchup.

Drawing cards is something that blue excels in. To quote another EDHREC writer, “I’ve never ended a game of EDH and complained that I drew too many cards.” Simply put, it dramatically increases your odds of winning. As fate would have it there are quite a few ways for our commander to draw heavy amounts of cards. Let’s take a look at some of the ways we’ll be drawing and sculpting our victory.

At this point you might have already taken note of the four creatures that draw us cards in some fashion. This is mostly due to the combo potential that they yield. Once our infinite mana and counter engine is online we can effectively utilize these creatures to draw until we have the answer. These creatures will likely see some of the most hate of any that we run in the 99, so it’s imperative that we run a decent amount of control spells to curb this.

With our combo pieces in place it’s time to visit perhaps the most critical portion of the deck, the enablers. Our combos are nothing without these cards on the table. There are tons of tap and untap oriented enablers at our disposal, so let’s take a look at the one’s that we’re going to utilize.

I know that seems like a ton of enablers, but we have to be prepared for the inevitable situation where our opponents get wise to our shenanigans. Experienced players will immediately identify these things for what they are, and that means that they will be lightning rods for removal. In a lot of ways this can work to our advantage, as we’ll run our enemies low on answers for the late game when we lock the combo in. This won’t be the case all the time, so it’s critical that we pay attention when developing our board state to avoid overextending ourselves.

It’s time we take a look at the rest of the deck and see what kind of removal and support cards we’ll be running. Without delay, here’s the 99.

Behold, the result of our mad science experiment! We rounded things out with some counter magic to disrupt our opponents if they would attempt to keep us from going off and some removal just for good measure. The lion’s share of slots is obviously devoted to direct synergy with our commander, but that’s really the only way a deck for this style of commander is effective. This makes these types of commander’s much more linear than others due to the reduced flexibility, but that doesn’t mean that the overall execution of the game plan must be. We have some great opportunities to impact the board indirectly if we step outside of the box and put our tools to work politically to be more subtle in our approach. It might not work all the time, but then again what does in this format?

I hope you all enjoyed this experiment in stepping outside of my comfort zone. I’m overall pleased with the results, and I’m confident that this is a deck that can satisfy both control and aggro players alike. I’m going to try and continue stepping outside of my comfort zone in the next few articles, but that doesn’t mean I’m not still taking reader requests. As always feel free to comment below with suggestions for this deck or for commanders that you would like to see. Thanks for reading and I’ll see you next time!