Will War of the Spark Make "Oops, All Planeswalkers" Viable in All Colors? 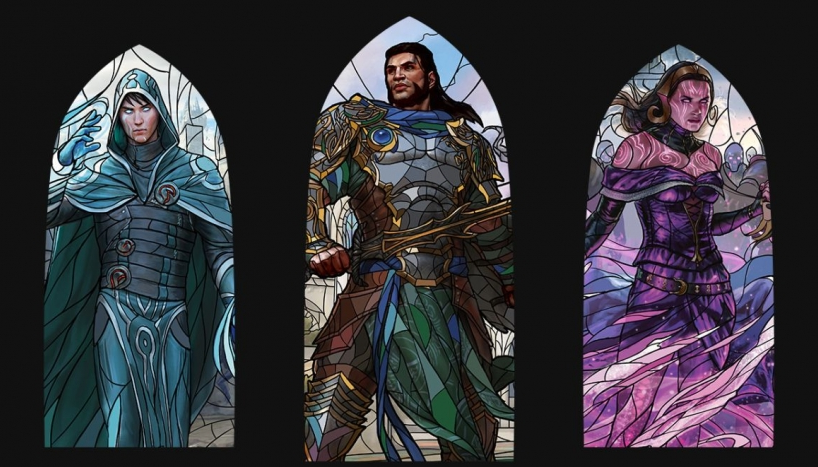 37 New Planeswalkers Confirmed! But is that Enough?

A few years back, "Oops, All Gideons!" crashed onto the 60-card scene, and a slight chortle was had by all. Since then, it's become more common to see variants in EDH such as "Oops, All Spells!" or "Oops, All Creatures!" The common theme among them is to play only that type of card in the deck (outside of lands).

It's a good deckbuilding challenge, and a decent way to have a unique deck you can play at lower power levels. Some of the easiest and best ways to do this have been figured out already by the community, such as Mizzix of the Izmagnus for all spells and Yeva, Nature's Herald for all creatures.

So with War of the Spark coming out, what about "Oops, All Planeswalkers!"? Well, Superfriends decks led by Atraxa, Praetor's Voice or Progenitus are fairly common, although it's rare to go true "Oops" status and have only planeswalkers. Even if you wanted to, however, it's really only been possible with four and five color commanders.

But will that still be true after War of the Spark comes out?

In all likelihood, no! Let's do some math, and look at what colors are looking viable for Superfriends and "Oops, All Planeswalkers!" decks so far this spoiler season:

How Many Planeswalkers Are There in Each Color Combination?

There are currently 139 planeswalkers, not counting the War of the Spark previews. Here they are sorted by mana cost.

With War of the Spark, there will be 176 planeswalkers total, adding in the new 37 that have been promised in some sweet stained glass teasers and the PAX East Panel where the Buy-A-Box promo was also added to the total. There is still some possibility of another surprise walker, but that would almost contradict the information that's been shared so far, so it seems unlikely. While we don't yet know the cycles of planeswalkers, we can at least assume for now that Wizards isn't pulling a Torment and skewing the color balance of the set one way or the other, and work from there to get a pretty good idea of what each color combination may end up with.

Therefore, for the purposes of looking at what will be possible once War of the Spark is out, we'll make some fairly safe assumptions.

While it's a small thing, when you're talking about having barely enough planeswalkers to make a deck themed with them, the fact that you can play colorless walkers in any Commander deck is a big deal. With that in mind, then, we're going to assume that Ugin isn't suddenly going to become Naya to contest Nicol Bolas, and Karn will remain colorless despite the fact that he can use all five colors of mana in the story. This means that every color combination will be able to count on at least two more planeswalkers they can play.

Assumption 3: Nicol Bolas is the Only Three-Color Walker

While it is my personal hope that we do get full cycles across the board, including one planeswalker for each Shard combination (Bant, Esper, Grixis, Jund, and Naya), the numbers really don't indicate that eventuality. If there was another surprise walker that got their spark in the storyline (or the Buy-a-Box promo gets counted as part of a cycle), there would be exactly enough slots to do two planeswalkers per color, two planeswalkers per Guild, and one for each Shard, but it is much more likely that the set designers explored what they wanted to without having to adhere to rigid cycles. With that in mind, the last assumption will be that the Dragon God himself is the only three-color planeswalker, and we'll have to wait until the next big three-color event to fill out the ranks.

With the assumptions out of the way, the math on how many walkers currently exist in a color and how many there will be after the release of War of the Spark is fairly simple.

So without further ado, let's look at all of those breakdowns and see what new planeswalker-themed decks may be possible for each color combination!

Pre-War of the Spark, there are 16 existing mono-white planeswalkers. After release, most likely there will be 18 with the new additions. So let's do a quick viability check on what can and can't be done in this color as it relates to planeswalker decks: 7 existing, 9 possible, plus 32 from mono-blue & mono-white walkers, for a total of 42 if you include the 3 colorless walkers. Given the above assumptions, we're looking at a bare minimum possible 46 planeswalkers in Azorius, still well under the 60 required for a true "Oops, All Planeswalkers!" bill. Still, let's check in on some Superfriends options:

So there you have it, a treasure trove of ways to build Superfriends decks utilizing only two colors. We now know that you can't pull off a feasible deck completely full of only planeswalkers and lands in any two-color combination. That just leaves three-color combinations, and to find out which combos are barely possible to pull off "Oops, All Planeswalkers!" and which ones have a little more depth to play with.

2 existing, 3 possible, totaling 65 with monocolor, dual-color, and colorless planeswalkers included, with a possible 74. Most interesting commander (in my opinion) for a Bant all-planeswalkers deck: Angus MacKenzie

1 existing, 2 possible, totaling 65 with a possible 74. Most interesting commander: Aminatou, the Fateshifter

4 existing, 5 pretty much guaranteed, totaling 67 with a possible 76. Most interesting commander: Nicol Bolas, the Ravager

1 existing, 2 possible, totaling 65 with a possible 74. Most interesting commander: Vaevictus Asmadi, the Dire

0 existing, 1 possible, totaling 65 with a possible 74. Most interesting commander: Tied between Zacama, Primal Calamity and Rith, the Awakener

0 existing, 1 possible, totaling 61 with a possible 70. Most interesting commander for this color combo (again, just in my opinion): Ghave, Guru of Spores

0 existing, 1 possible, totaling 59 with a possible 68. Most interesting commander: Tasigur, the Golden Fang

In other words, all of the three-color combinations are possible to do a true "Oops, All Planeswalkers" deck, with Jeskai and Temur being the deepest. You might even have to make some hard decisions, what with having to cut 10 planeswalkers!

So, what do you think of "Oops, All ____" decks? Are you excited to try any three-color all-planeswalkers decks now that the option will be available? Will you pick up the challenge of making Superfriends the hard way?

Also, what predictions do you have about War of the Spark now that we've seen a bit of it? Will Fblthp get found *and* get a spark? Will the Rules Committee allow planeswalkers as commanders on a trial basis, a la Unstable?

Finally, what colors do you predict the 36 spoiled stained glass planeswalkers to be? Will we see an Orzhov Gideon in the wake of his association with the Blackblade? Will Huatli or Samut become Naya? Tell us what you think in the comments so you can get the credit during this spoiler season!