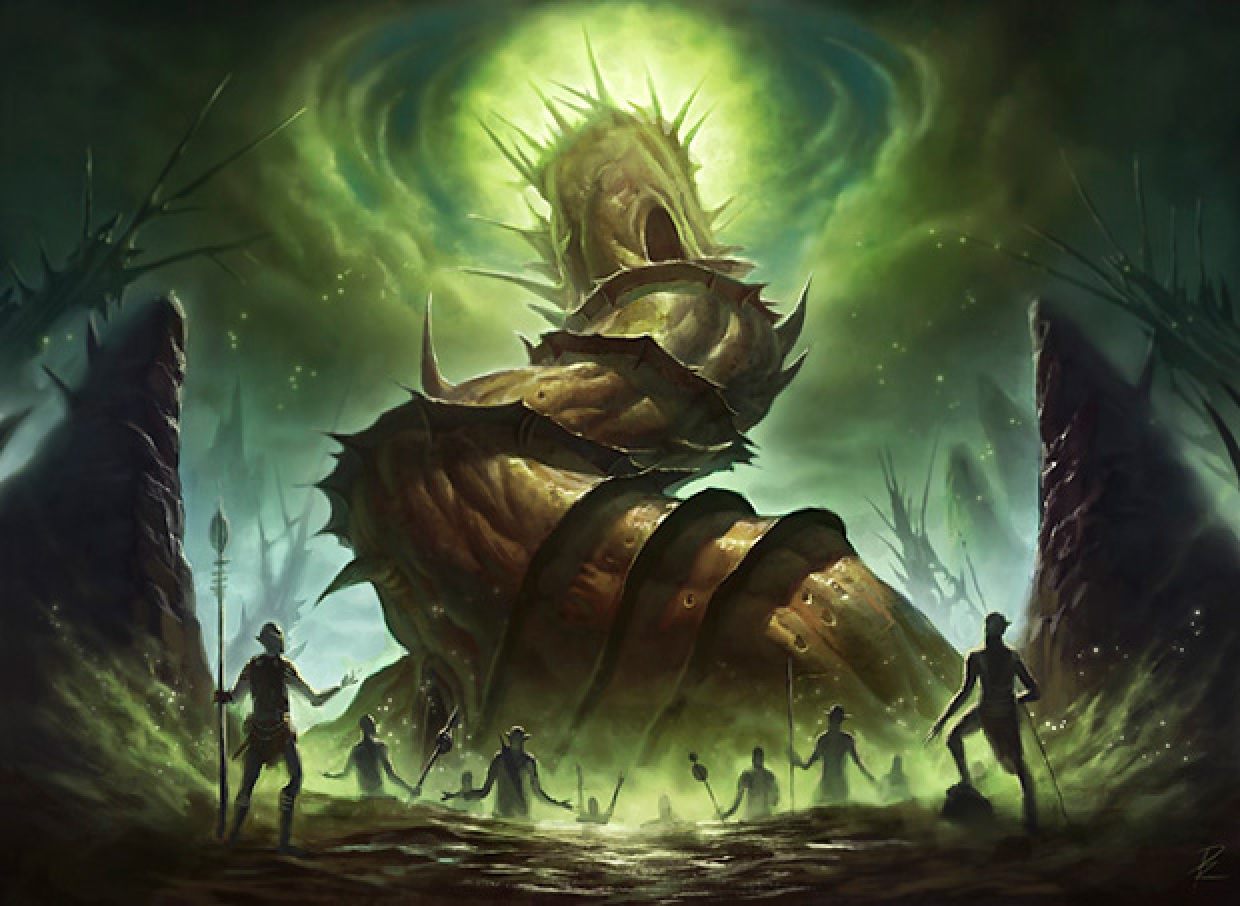 Welcome everyone! Today we are trying something a little different. As you know, my previous series about the Singleton Guild Wheel wrapped up a couple weeks ago. With that completed, we are now moving on to a fresh mindset for my articles moving forward.

The Guild Wheel was a known quantity for us, it wasn't ever meant to go on forever. We asked the readers for ideas on articles that they'd like to see, and I heard a few different idea,s but one specifically stuck out to me. One thing that EDHREC tries to do is help people get into playing 100-card formats and provide resources for that endeavor. While there are plenty of ways to help established players navigate the format, coming from 60-card formats into EDH can be a little overwhelming. Which brings us to this new series!

Each article takes a 60-card deck archetype, or maybe even a reader's exact list!, and transform it into a 100-card Commander deck. I will do my best to recreate the play experience, and introduce a few new concepts to help people ease into the world that is Commander. Keep in mind that there are TONS of awesome possibilities, I am just trying to help ease the transition for people who may not have tried a certain archetype in Commander. Also, if you happen to like the Commander deck we arrive at, maybe try its 60-card companion! Even though we are EDHREC and all about the 100-card varieties, Magic is Magic, and the more people playing more formats the more likely you are to find someone to play a game with.

Since nobody has given me a deck to recreate yet...I'll start with a deck that I'm very fond of from the Modern format: Abzan Collected Company!

This deck is all about being a creature toolbox and gaining infinite life. Through the interaction of Kitchen Finks, Viscera Seer, plus any of the chosen between Anafenza, Kin-Tree Spirit, Melira, Sylvok Outcast, or the new toy in Vizier of Remedies. The combo happens when you sacrifice Kitchen Finks to the Viscera Seer's scry 1 ability. When the Finks come back from its Persist ability, one of your choice -1/-1 counter cards then removes the counter that would have been put onto the Kitchen Finks, meaning you can sacrifice it again and again for infinite life and infinite scry. This lets the deck set up whatever draws it wants to have next at pretty much any time. Many scry, much lifegain

Confused yet? I hope I didn't lose you. There is quite a bit going on just in that three-card interaction. The point here is that we're going to gain lots of life and, as long as the other players don't mess up our combo, we can draw whatever card we want at any time. This gives the deck lots of flexibility and ability to find answers.

Who's Steering This Ship!?

Due to the colors for the combo, we know that we need a commander who is Abzan colors (white, black, and green) to play our initial combo. Some great starting commanders are Anafenza, the Foremost, Karador, Ghost Chieftain, or Teneb, the Harvester. All of these not only give us the colors we need, but in Karador/Teneb we also get ways to recur our creatures for the expected Wrath of God effects we will face in any given game. If all you're trying to do is gain lots of life with this combo, either of those commanders would be a great start, but we're going to go a little deeper. All are a fine start to any graveyard/anti-graveyard deck

Since blue is the color of card draw and overall cheat-ery it's really hard to not want to play blue, especially since we have access to 4-color decks through the new Partner mechanic. Atraxa, Praetors' Voice is well known as the most popular commander on EDHREC, but for a no-red creature toolbox deck like the one we're building Atraxa doesn't help us much. Ravos, Soultender initially didn't get much love, but I happen to be crazy about him. Being able to pull creatures from our graveyard for reuse is exactly what this kind of deck wants from it's commander. Coupling Ravos with Thrasios, Triton Hero means that we won't ever have to sit and twiddle our thumbs with open mana Atraxa is boring, get original kids!

Setting Up The Box

Now that we have our commanders and colors picked out, it's time to fill out the deck. Obviously, since we're playing a toolbox of creatures, we need ways to find them. Two of the better creature tutors happen to be banned in the Modern version of our deck even! That's how you know they're good. Green Sun's Zenith and Birthing Pod are two highly-played creature tutors in Commander coming in at almost 22,000 copies played in decks that EDHREC knows about. If you're not playing either of those, maybe take that as a sign? Or a strong hint? If you still need that hint, here you go!

Birthing Pod acts as both a tutor and a sacrifice outlet for our obsolete creatures making it an incredibly powerful card in our deck. Phyrexian mana almost acts like a legitimate cost reducer when you start at 40 life. When your Phyrexian-mana spells all essentially have Channel attached to them (after the 60-100 format exchange) you can see why the cards are even more useful and easier to cast.

Filling Our Box of Tools

Since we're not playing 60-card decks anymore our curve gets WAY more interesting for fun things. Since lots of our creatures have various useful "enter the battlefield," abilities, we want some ways to get them back. Taking a gander at the signature cards in your typical Ravos/Thrasios deck we see what some would consider the three best cards when it comes to recursion: Eternal Witness, Sun Titan, and Karmic Guide. What better way to start the deck than some awesome creatures to make sure your best cards are twice as nice? The Holy Trinity of Takebacksies

What is also fun about toolbox decks is that there is rarely a situation that you won't have some sort of answer and the tutors to go find them. This means we're probably going to be doing something meaningful each and every turn. Lots of players are drawn to the creature toolbox decks because it lets them make meaningful decisions in the game at every turn, and it's hard to blame them! Always having action means you're always having fun.

In 60-card formats, valuing people out is usually a legitimate gameplan. Exchanging card for card in Standard or Modern might be fine, 2-for-1's are good but that doesn't always translate well to Commander. The Qasali Pridemage beatdown just doesn't get there as often. But have no fear! When your curve is larger, your answers are, too! You said answers were bigger?

Aluren is something of a pet card of mine. There are few things I love more than cheating and reducing casting costs. Aluren actually lets us do both, acting as a weird combination between the banned Prophet of Kruphix and cascade spells, letting us just cast the creatures for free. This lets us combo off with several of our nifty card interactions at any time due to the second line of text on the card. Aluren also makes some creatures like Recruiter of the Guard get free creatures at nearly any time. Look, if there's anything I love more than free spells, it's free spells that let me cast more free spells. Going Down To Value Town!

Aluren is such a powerful card that we're even stealing a combo from the Legacy deck aptly named after this signature card. Cavern Harpy and Parasitic Strix should be very familiar to anyone who plays Legacy as they make an instant speed win-condition with Aluren. You could even choose to build your own Necropotence with Harpy and Baleful Strix. Season to taste with Rashmi, Eternities Crafter to create extra value on your creatures and you now have a win condition fit for any format! And with that, here's our translated 100-card deck!

I hope you all enjoyed the inaugural exploration into the 60 to 100 series! If you or a friend have a deck or archetype you like playing in 60-card formats and would like to see it treated this way, please feel free to send it my way. I love seeing a good old fashioned brew, and helping people get into Commander. Thanks for visiting and we'll see you next time!