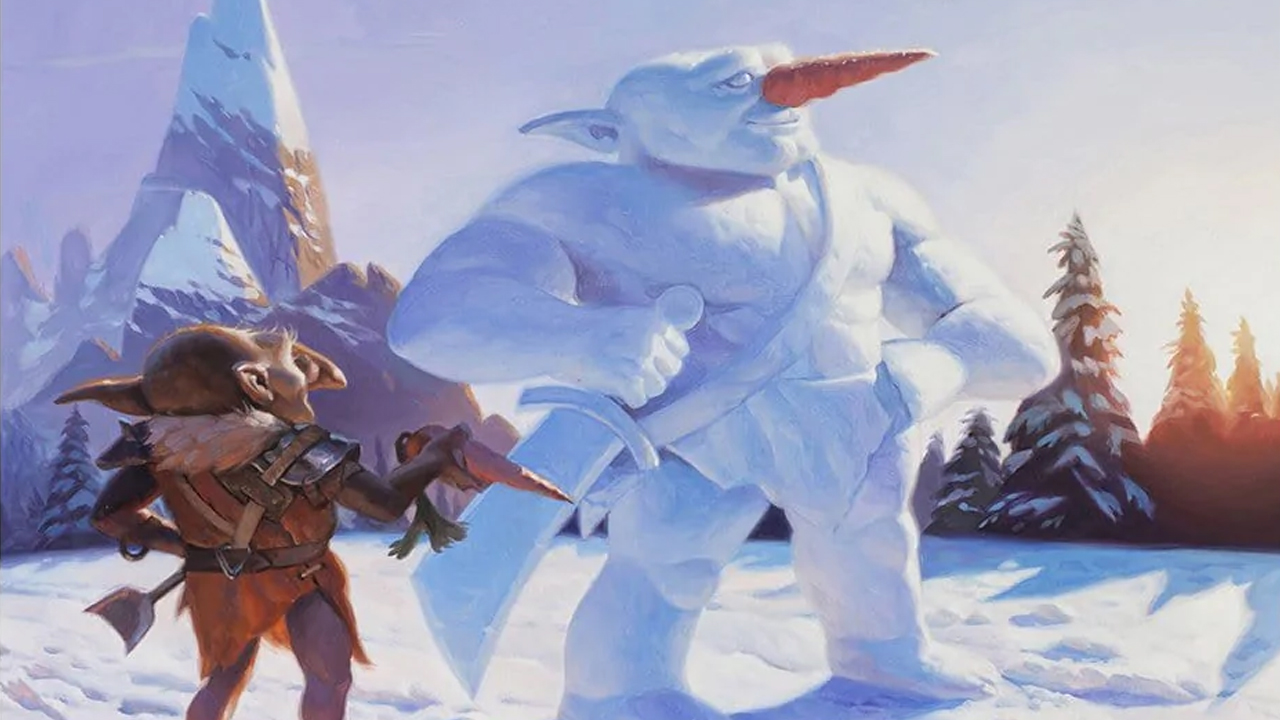 Do You Want to Build a Snow Deck?

Have you ever made a Commander bucket list? Welcome to Achievement Unlocked, where we take a look at the cool and unique things you can do in this format other than just winning.

Here in Michigan we've had a light winter compared to what we're used to, and you know what? I miss the snow! I set out to build a deck with a strict restriction of no non-snow cards. Also, I really like the snow-frame on cards!

Building under a strict restriction is a great way to test your deckbuilding skills and see what cards outside of EDHREC's most played list can fill the essential roles within our deck. Let's take a look at my process of building with a restriction. When building a restriction, I strongly recommend you supplement EDHREC data with the amazing tool that is Scryfall.

The past few years have given us two three-color commander options for a snow-themed deck: Jorn, God of Winter and Isu the Abominable. Which do we build around? Both are great options, but which offers more?

Why is this relevant if it's so close? If we want to build a deck that is ENTIRELY snow, we're likely going to have to use every card at our disposal. Even then, we're still looking at a deck with a relatively high land count of over 40 lands. It is important to consider if we have enough tools to even build a full deck around. Sultai gives us more in terms of sheer card volume, but what cards do each combination give us that the other doesn't. Then we can decide if we have enough to build a full deck with this restriction.

First, let's start with the commanders, because unfortunately, they don't fit into each other's deck. Both provide serious card advantage for a deck that's committed to the snow theme. Jorn, God of Winter is a mana-doubler whose back half can function as a repeatable engine to grab cards out of our graveyard. Isu the Abominable offers us a Future Sight effect and can grow throughout the game to present a game-ending threat. Two good options means we have to dig a little deeper to see what each combination offers.

First, let's look at white. Adarkar Valkyrie is a big flying threat, but more importantly, it lets us grab enemy creatures that die. The snow restriction means we're light on heavy hitters, and it's nice if we can borrow one from a friend. We won't have access to most of the best removal in Commander, but white offers us some replacement options. On Thin Ice will do its best Swords to Plowshares impression. Gelid Shackles also serves as a mana-intensive Pacifism. Heck, you can forget combat altogether and hide behind Cover of Winter until you're ready to end the game.

On the other hand, black gives us access to removal with Priest of the Haunted Edge and, perhaps most importantly, an incredible board wipe with Blood on the Snow. Chilling Shade and Hailstorm Valkyrie can be late-game mana sinks if you're struggling to snag the win. Finally, Narfi, Betrayer King gives our underwhelming snow creatures a much-needed boost, while Draugr Necromancer gives us an interesting source of card advantage as well as the ability to play our opponents' spells.

Making the final decision which direction to go was tough, but in the end I opted for Sultai. Isu the Abominable was enticing because our snow restriction also affects our card draw, and having card advantage built in is important. It also can be a win condition if it gets big enough. In the end, however, I chose Jorn, God of Winter because it gives us access to a larger card pool and a wider array of effects as well as the mana to best leverage our underpowered creatures.

What Else Does Snow Have to Offer?

Admittedly, this deck does not have great removal. Outside of black's powerful removal effects, blue adds Winter's Rest and some situational removal with Icebind Pillar or flashing in Ice-Fang Coatl to block. Blizzard Brawl is another solid option if we have a creature that is big enough.

Luckily, we have more draw and ramp options. Ascendant Spirit can eventually start drawing us a card each turn. Blessing of Frost grows our creatures and can draw us cards. This is the deck (maybe the only one) that Frost Augur slots right into since it will always draw a card. Graven Lore will often scry 5 and draw 3, which is incredibly powerful. Ohran Frostfang and Ohran Viper are both a nuisance to block and will draw a ton of cards.

We don't have Sol Ring or Arcane Signet, but we still have efficient ramp in Coldsteel Heart at just two mana. Rime Tender, Boreal Druid, and Sculptor of Winter fill out our mana dorks slots, and these cards can really generate boatloads of mana when our commander untaps them. Glittering Frost gives us an enchantment option and fixes our mana. Replicating Ring can also fix our mana, and if it sticks around long enough it gives us tons of snow permanents. Centaur Omenreader is perhaps the most powerful ramp in our arsenal, but it's important to consider that it is a bit of a nombo with our commander. It is still a great inclusion, but we need a way to tap it. A great option is by bringing it back from our graveyard with the back side of our commander, which makes it enter tapped.

It's not ramp, but how can I neglect to mention the card that warped multiple formats: Arcum's Astrolabe smooths out our mana and cantrips on its own. It's not good enough to get banned here in Commander, but that doesn't mean it has no place.

This deck will primarily win the game through beating down with creatures. Abominable Treefolk, Conifer Wurm, and Rimefeather Owl are all big creatures with a form of evasion that can close out a game once we have a bunch of snow permanents. Boreal Outrider grows our creatures as they enter the battlefield, and Icebreaker Kraken can clear the way for our creatures to deal damage.

We couldn't talk about snow without discussing Marit Lage. Marit Lage's Slumber is a serious win condition that can give us incremental advantage along the way. We also have access to Dark Depths, but not its best buddy Thespian's Stage, and I refuse to break our restriction even for this combo. That said, our deck has enough lands that we can think of Dark Depths more like a spell. Thirty mana is no small task, but this deck can create crazy amounts of mana with our commander, and after a few turns of dumping our extra mana into this we might just end up with a Marit Lage.

Building with a strict "only snow" restriction might not create the best deck, but after digging deeper I can certainly say it creates a deck that is functional, and more importantly, one that's fun and thematic. If you want to improve your game, I strongly recommend building at least one deck with a strict deck-building restriction. If you can't think of one on your own, try building with a Companion. Not only will it improve your skill, but it will let you see cards you've probably never seen before and create amazing stories at the table. At the very least, it's an item to check off your Commander bucket list.

Check out the full deck below!