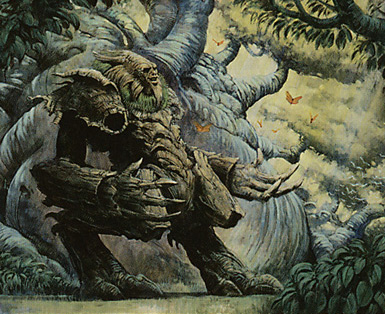 Some things stand alone. French fries, for example. The phrase "with a side of fries" is a tragedy and shouldn't exist. I'll take fries a la cart any day, giving much thanks for such a bounty. But...have you ever had fries with a milkshake? Now, hold on, because you read that wrong. You see, what I said was, "Have you ever had french fries inside a milkshake?" Yes, I'm talking about a cup of frozen sweet cream stuffed with deep fried salty-potatoes. That's the sort of indulgence that causes a body to regret who makes its decisions. Power move. This week in the Burning Inquiry series we get fat with Multani, Maro-Sorcerer as we combine two things that don't belong at any respectable kitchen table: Hugs and Stax. With an appetite like that it's no wonder Multani was left to binge eat in relative obscurity with only fifty-two decks listed on EDHREC. However, from my early days in the format, I've come to know this legend to be an insatiable force, and he's quietly been feeding on new cards in recent set printings. Inquiry #1: How does green put cards into your hand?

This line of inquiry inspired a heavy helping of value creatures that "replace" themselves when played. Green has a massive sampling of these: Multani's Acolyte, Elvish Visionary, Wall of Blossoms, Carven Caryatid, Fierce Empath, Gatecreeper Vine, Sylvan Ranger, Civic Wayfinder, Borderland Ranger, Nissa, Vastwood Seer, Eternal Witness, and Skullwinder. Pair these with tasty offerings of Wood Elves, Farhaven Elf, Yavimaya Granger, and Yavimaya Dryad. Finally worth mentioning are appetizing tricks such as Quirion Ranger, Scryb Ranger, Courser of Kruphix, Oracle of Mul Daya, Tireless Tracker, and Lifecrafter's Bestiary. You won't find all of these cards in the average Multani deck but it's a flavor that compliments our main dish.

A steady, disciplined diet of organic snacks. Multani would be healthy, albeit a bit dull. It was only a matter of time before some high-fructose corn syrup would tempt us.

Bring All the Boys to the Yard Now, Multani desires more than a snack. He'd prefer for all players to have a full grip of cards. Of course, in green there are some self-full-filling options such as Garruk, Primal Hunter, Soul's Majesty, and Rishkar's Expertise, but that isn't enough to guarantee a gluttonous elemental.

Inquiry #2: How do we get Multani fat on full hands?

Being limited to cards in Multani's color, you might say our hand is forced (ba dum tss). Four out of five EDHREC deck builders agree, we should resort to feeding everyone junk food. Howling Mine (78% synergy), Temple Bell (67% synergy), Font of Mythos (71% synergy), Otherworld Atlas (59% synergy), and Mikokoro, Center of the Sea (53% synergy) are super unhealthy, toxic cards to put on our menu, but we have lost interest in reading about calorie content. We're also ordering up Rites of Flourishing (63% synergy), Horn of Greed (45% synergy), and Heartwood Storyteller (55% synergy) because now our shame-eating begets more shame-eating, until finally we go full Kirby and drop an Anvil of Bogardan (44% synergy).

You will drink our milkshake. You'll drink it up! Having enabled our sweet tooth, now it's time to get salty. Most EDH veterans see right through the unwanted bloat brought on by a group hug player pushing carnival food on the table. This makes us a target. Especially when we drop a shrouded 30-power general onto the battlefield. With extra weight to throw around, the crowd we've been fattening up can turn on us. Another thing to consider is that some people have fast metabolisms and we don't want them over-exercising their way into skinny hand sizes.

Inquiry #3: How do we keep Multani fat?

The answer here is crude: we constipate the table. Root Maze, Orb of Dreams, Thorn of Amethyst, Sphere of Resistance, Lodestone Golem slow down digestion. Then there's Tangle Wire, Storage Matrix, Static Orb, and Winter Orb if you really want to back everyone up. But if that isn't enough, you can also just sew people shut, and keep feeding 'em (yeah, torture) with the help of Hall of Gemstone, Ritual of Subdual, Freyalise's Winds, and Vorinclex, Voice of Hunger.

The baffled waitstaff is reluctant to ask, "Can I get you anything else? Dessert perhaps?" Yes, yes of course. For we came gleefully prepared for such a heavy spread, including cards such as Selvala, Heart of the Wilds, Earthcraft, and Seedborn Muse that ensure we can order another round for the table. Furthermore, there are synergies that keep us hungry for more. While everyone else feels their stomach churn at the site of a hot fudge Storm Cauldron getting served up, Lotus Cobra, Stone-Seeder Hierophant, Gaea's Touch, Burgeoning, and green's abundance of Exploration effects play really well with our mass consumption card draw strategy. At this point we're required to question our habits. The people burdened with the feast we've provided are disgusted, and none of them are interested in watching us lick our fingers. Maybe we should pick up the bill, and let everyone waddle home.

The obvious choice is to give our general evasion and let him roll over opponents one by one. Without being too narrow in their application, cards like Garruk Wildspeaker, Nylea, God of the Hunt, and Kamahl, Fist of Krosa work well even through our Maro-Sorcerer's shroud of bacon grease.

Given the arc of this article, this might not shock you, but the other win-condition is a little more obnoxious: infinite combos. You see, this is an Aluren deck. Hence the abundance of low-drop value creatures. There are plenty of loops that we won't list here, but know that things really resort to a food fight once our enchantment is combined with Cloudstone Curio.

I mentioned this deck was a relic from my early endeavors in EDH. This is the reason for the troll-ish nature of its design. It used to be rare that I'd get to play a game, so I made them count. With that said, Multani has been retired for quite a while now that I'm part of a playgroup I enjoy, and I'd be hesitant to bring out a Hug-Stax-Combo deck except on the rarest occasions. Though, I do remember enjoying the challenge of trying to strike the perfect balance between resource provision and resource denial. This deck stands alone as a unique strategy composed of conflicting archetypes.

Leave a comment if you find yourself hungry for what we've described here, or if you have any hot dishes for Multani that we should feast our eyes on!