The Hidden Hand of EDHREC

Welcome to Challenge the Stats! This series is based on the awesome EDHRECast segment that challenges overplayed and underplayed cards in EDHREC’s data. Any data has potential for biases, trends, and error, and it’s our job to arm you with that knowledge. In this spinoff series, we’ll pick out ten cards on a commander’s page to challenge. Remember, these are merely suggestions, and card choices made by you, the deckbrewer, for any reason (such as flavor, budget, art, or fun) are always most important and are what keep our format unique and awesome. 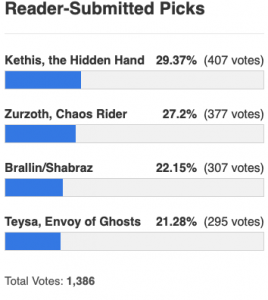 It was a close race, but Kethis won the poll last article!

Last article, you all voted and chose Kethis, the Hidden Hand as the next commander to challenge. I reached out to EDHREC creator Don Miner for his expertise, because he has a longstanding Kethis deck, and he graciously agreed to be our advisor for this article.

Kethis is the sixth most popular Abzan commander on EDHREC. He discounts our legendary cards and lets us play them from the graveyard, making him a great Legendary Tribal commander.

Before we get into Don's challenges, let's get to know him a bit! 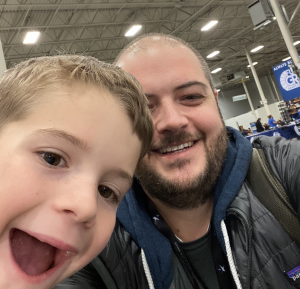 Don and his son at his son's first GP.

When did you start playing Magic?

Don: I started playing Magic at the start of 4th Edition, when I was around 11. I didn't really know what I was doing and mostly just made unsleeved decks from whatever I had and played against my neighbors. I stopped a few years later and didn't pick it back up until Shards of Alara. I started out playing Standard, but once I had kids I found it hard to keep up and so I pretty quickly made EDH my main format.

What prompted you to start EDHREC?

Don: I was inspired to start the site by seeing lots of Reddit posts of people asking for suggestions that ended up being pretty obvious, like what cards really synergize well with whatever commander. The data was there and the results were pretty good, so I figured I'd make it a website.

What do you like to do outside of Magic?

Don: Outside of Magic, I'm mostly doing stuff with my family, as my three kids keep me pretty busy, but luckily I've started training them to play Magic with me. I like hanging out and doing outdoor activities in and around the Chesapeake Bay, where I live. I play more than my fair share of video games.

If you'd like to hear more about Don and the history of EDHREC, check out his guest appearance on this episode of the EDHRECast Podcast.

We're going to challenge the data from all 900 Kethis decks at the time of writing, and you can see how often those cards are played in parentheses (%). Here we go.

Don: I try to play fewer tutors in Kethis than I usually do in other decks with black. I feel like I always have a nice tempo going because of his cost reduction and I always am pumping out multiple legendaries per turn. Tutoring sometimes feels slow and awkward and I'd rather just cast legendary spells at a lower cost. I play Vampiric Tutor, Eladamri's Call, and Demonic Tutor, and Captain Sisay, but that's pretty much it. Cards like Thalia's Lancers just cost too much and really slow the deck down, plus they aren't legendary.

Don: I feel like most planeswalkers in Kethis are a bit too slow and grindy. There are just so many good low-CMC legendaries to choose from these days, combined with planeswalkers just dying in Commander. I find myself always cutting them after trying them out.

Don: Grapple with the Past, Grisly Salvage, and Mulch are underplayed in my opinion. They aren't very exciting cards, but they do a good job filtering early on to get you your land drops and making sure you stay on curve. In general, I like to see good tempo out of this deck, and filtering through your deck while filling the 'yard serves multiple purposes. I think Gitrog is underplayed for this reason as well, as he does a great job filling the graveyard while churning through the deck. Unlike a typical mass reanimator deck, my goal isn't really to fill my 'yard, then do ridiculous stuff. It's more to grind out value and have good tempo because of Kethis's -1 mana. Filling up the 'yard while doing other good stuff is nice, because it will come in handy when you need to recover after a boardwipe, while you are still advancing your board state.

Don: I'm going to say that Kamahl's Druidic Vow, Primevals' Glorious Rebirth, and Urza's Ruinous Blast, the legendary sorceries, are underplayed because they aren't in 100% of decks. These cards are insane. Urza's Ruinous Blast is always going to benefit us, Primevals' Glorious Rebirth has won me so many games in a blowout, and Kamahl's Druidic Vow is just so much fun.

Don: I like Akroma's Memorial a lot. This card is just such a blowout against so many decks. It somehow feels a lot better at 6 mana instead of 7, and if it gets killed you can just bring it back.

Don: Life from the Loam is a card I'm always happy to see early. It does a good job filtering through and giving me lands so I never miss a land drop, but also it fills up the graveyard pretty effectively with legendaries for Kethis fodder. It's an expensive card these days ($17), but if you were going to splurge for a card, this could be it.

Don: I don't understand how God-Eternal Rhonas doesn't show up on EDHREC as a popular card for Kethis. This card is so good. It's obviously not as good as Craterhoof Behemoth, but I've done some silly things, like cast Rhonas, sacrifice it, then cast it from the graveyard again for two triggers in the same turn.

Don: In general, I try to keep my legendary count as high as possible. This helps with fodder in the graveyard but also helps progress the game forward. I'm playing less spot removal and utility than I usually do, and instead, try to find them on legendary bodies instead. For example, Rankle, Master of Pranks does a good job making others sacrifice creatures, Polukranos, Unchained is great creature removal, Bruna, the Fading Light reanimates, Tymaret, Chosen from Death cleans out graveyards, and Kogla, the Titan Ape kills all sorts of stuff. This can be a bit slower than a 2-CMC Doom Blade, but being able to recast Kogla, the Titan Ape a couple of times to kill off a bunch of stuff is awesome.

Don: There are a lot of silly lands that are legendary. There is little downside to playing Okina, Eiganjo Castle, and Shizo, Death's Storehouse unless you run into a lot of non-basic hate in your playgroup. There is also Pendelhaven, Phyrexian Tower, and Kor Haven. Also of course there is Urborg (no, not that Urborg, the one from Legends), which is hilarious and awesome. Unfortunately a lot of these cards are monetarily expensive, but really having a high density of these really helps because it becomes good fodder for Kethis, either getting land drops from the 'yard or exiling them. Also, remember that Gaea's Cradle is legendary? Unfortunately, I don't think people forgetting it is the reason why it's underplayed (it's extremely $$$$). I do try to be careful not to add too many cards that only make colorless because Kethis doesn't have colorless in his mana cost and I want him to come down fast. For example, I don't play Geier Reach Sanitarium, Mikokoro, Center of the Sea, Gods' Eye, Gate to the Reikai, and the few other legendary lands that create colorless that show up on EDHREC.

Next, let's take a look at Don's personal Kethis deck.

Don: My Kethis deck wants to win via combat damage instead of setting up a Kethis-involved combo. It tries to be well-rounded and resilient and able to come back from boardwipes and other disruption quickly. There is a lot of legendary support as a tribe, and it's got a really midrange/tempo kinda feel to it. Kethis's reduction really helps pump out things, and I have a decent amount of card draw in the deck.

Many thanks to Don for his wisdom in this article! I hope you all got some ideas for your Kethis deck, or some inspiration to build a new one! Come on, all those legendary creatures are sitting in your binder just asking you to make it happen, right? Do you have any other cards you'd like to challenge for Kethis? Let us know in the comments below!

Be sure to vote on next article's challenge featuring MH2 reprints! To get updates about the winner and contribute your own challenges, hop in the Challenge the Stats Discord here!