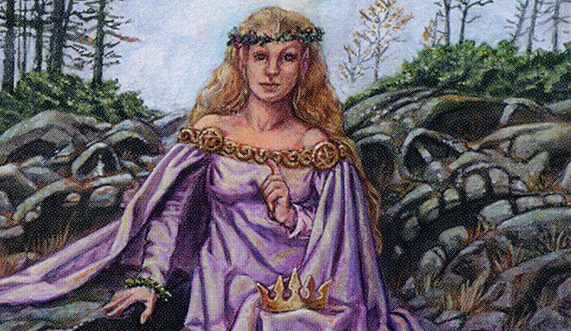 Hello, and welcome to Challenge the Stats, the series based on the EDHRECast segment of the same name where we pick out cards that we think are overplayed, underplayed, or sleepers to challenge EDHREC’s data. Always remember, dear reader: card choices made by you, the deckbrewer, for any reason such as flavor, budget, art, or fun are always most important and are what keep our format unique and awesome.

Last article I asked for reader submissions. There were some really good ones, and I ended up choosing Merieke Ri Berit, suggested by Steven Bahl. Thanks, Steven, and thanks, everyone else, for your suggestions!

Merieke wants to steal our opponents' creatures. Her themes are showing us theft and blink, which makes sense because by using the right blink cards, we can both untap Merieke and turn her "borrow" effect into a permanent steal.

A quick disclaimer: people usually don't like their stuff being stolen, so let's not be surprised when our opponents get a bit grumpy!

We're going to challenge the data from all 354 Merieke decks at the time of writing, and you can see how often those cards are played in parentheses (%). Here we go.

We want to blink creatures to permanently steal them; however, we need to read these cards very closely. Cards that say "return under owner's control" will just give the creature back to our opponents. Now, these cards can serve the purpose of untapping Merieke or repeating any enter the battlefield triggers if our deck is build that way, but I'd rather focus on blinkers that say "return under your control" to also help Merieke steal creatures. Let's go through the cards that don't do this (I've also included some examples of "death blinkers").

Next, let's check out some cards that help Merieke permanently steal creatures:

Mortify is one of those cards that is getting pushed out as we get new and better alternatives. Cards like these can linger in our data as people look at data from old decks, see these cards, and include them in their new decks. EDHREC only takes data from decks updated in the last two years, so these cards aren't holdovers from ancient decklists, but are so deeply entrenched in the Commander psyche that it takes years for them to fade.

Since we're stealing our opponents' best creatures, we're not as concerned about creature removal, so it's really other permanents that we want our removal to deal with. Mortify only hitting enchantments other than creatures is a big drawback.

We've recently seen the additions of Generous Gift and Despark, which only appear in 12% and 20% of decks, respectively. I'd expect to see these numbers increase over time as Mortify drops off.

We're seeing a small number of people running cards that grant indestructible. Others that show up on the page are Emeria's Call (9%) and Fight as One (7%). These are fine for protecting our creatures, but they only kind of work to help Merieke steal creatures. If the creature Merieke has stolen becomes indestructible before she untaps, it won't be destroyed and we'll get to keep it. However, the duration of the steal is still linked to Merieke being on the battlefield., so we can keep stealing creatures and making them indestructible, but we are susceptible to a huge blowout as soon as anyone removes Merieke and all of those creatures return to their owners, alive and well.

The Nightmare Shepherd is phenomenal in any situation! If we can't blink a creature to permanently steal it, we can make a 1/1 copy and exile it when we untap Merieke. For some creatures, we might not care if it's a 1/1 (steal a Scute Swarm?). If we do get the permanent steal on-line, the Shepherd just gives us another copy of those creatures when they die. Also, we get to graveyard hate those creatures on their way out, so our opponents can't try to kill and resurrect them.

Merieke will be a removal magnet, so I definitely want to have some redundancies for her effect. They also stack nicely, so getting more out at once just means we can steal more things. Here's my list of things that are similar to Merieke's ability and require a blink for a permanent steal:

And a few that permanently steal all by themselves!

Future Sight made a bunch of weird enchantments that tap, so this card taps the Aura to untap the creature. Pretty neat, huh? If Pemmin's Aura and Freed from the Real are out of your price range, check this one out.

This is one of those blinky cards that was Oracled to say "Return each creature card exiled with Cold Storage to the battlefield under your control". It's a bit of a mana investment up front, but then we can just keep stealing creatures and exiling them in Cold Storage, ready to bring them back whenever we want. Do our opponents blow up the Cold Storage or our creatures? If we're holding up three mana, we can create quite a conundrum for them!

Nephalia Smuggler is a nice little blink ability on a 1-drop creature. A lot of these cards aren't super budget-friendly, like Thassa, Deep Dwelling, Conjurer's Closet, and Deadeye Navigator, so Nephalia Smuggler can be a welcome budget alternative to these.

There are quite a few other cards on the page that synergize with our suite of untappers. I'm seeing Royal Assassin (19%) and Avatar of Woe (12%) as ways to remove creatures that we can untap and use again. Intrepid Hero has the advantage for me over these cards by being less restrictive than Royal Assassin and more consistently less mana than Avatar of Woe. Sure, there's the "why not run them all?" argument, but don't sleep on the Hero!

I prefer untappers that can work with any permanent like, Fatestitcher and Vizier of Tumbling Sands. If Merieke isn't out, we can use them as ramp to untap our lands or mana rocks. So I went hunting for others! Merfolk Skyscout seemed like the best overlooked untapper, since flying will usually let it get in attacks on someone. It also untaps on blocks, so we could threaten to steal something with Merieke if someone attacks us.

It's certainly not "optimal", but this is my absolute favorite perma-steal blinker. Are our utility and support creatures not getting the job done? Replace them all with 5/5 Dragons, and then we get them back when Day of the Dragons leaves the battlefield! This is both boardwipe protection and perma-steal for Merieke. If we're running this, we should also include cards in our removal package that hit permanents/enchantments to make sure we can blow up the Day of the Dragons if we need to (which this deck wants to do anyway).

Let's go to a decklist! There seemed to be a lot of functionally similar low-priced cards to the high-priced ones we'd normally expect to see with Merieke, so I went ahead and made a budget decklist for her. It's just over $60 at the time of writing.

For more Merieke insights, check out this article by Ben Doolittle!