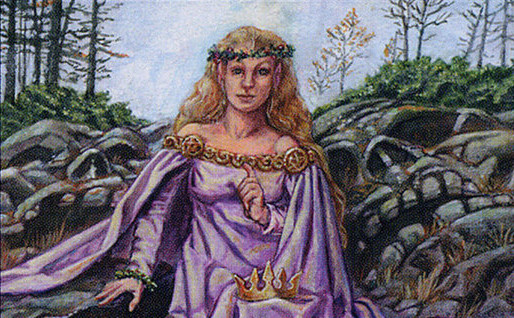 Hello everyone, my name is Ben and I’m a new writer here at EDHREC. I’ve been playing Magic on and off for nearly fifteen years, and Commander specifically for the last three. This article is the first in a series called Conditions Allow, where I will look at legendary creatures that have powerful abilities and equally powerful drawbacks. In each article, I will take a close look at the commander’s effects, both positive and negative, and build a deck that takes full advantage of each.

Without further ado, let me introduce you to our first entrant, Merieke Ri Berit.

Merieke taps to steal an opposing creature for as long as she remains tapped, or until she leaves the battlefield. When either of those happens, the stolen creature is destroyed. The only catch is that Merieke does not untap during your untap phase. This is a powerful ability, if we can use it more than once. Unlike most other stealing effects, Merieke destroys what she brainwashes, rather than giving it back, which means the deck will focus on untapping her, then taking advantage of all those creatures going to our opponents' graveyards.

Before we get too excited though, let’s check out Merieke’s EDHREC page. Unsurprisingly, her Signature Cards are almost entirely composed of untap effects, like Thousand-Year Elixir and Magewright's Stone. What does surprise me is that "Theft" is only Merieke's second most common Theme. There also aren’t any cards in her average list that really interact with graveyards, so we will have to look elsewhere for inspiration.

Building on the idea of stealing creatures, we'll want two categories of graveyard interaction: revival effects and on-death triggers. Before we get into that, though, let's see how we can help Merieke untap.

Going back to Merieke’s Signature Cards, I do want to include most of them. Freed from The Real is a powerful untap effect that is nearly mirrored by Pemmin’s Aura, which can also grant shroud. Vizier of Tumbling Sands is a flexible creature that lets us untap any other permanent. We can also get a one-time version of this effect when cycling the Vizier, allowing us to dig for cards if we need to.

Aphetto Alchemist as a similar effect, although it can only target creatures or artifacts. But, when the Alchemist is paired with Illusionist’s Bracers, it can untap another creature or artifact and itself, giving us infinite Merieke activations or infinite mana. The Bracers are also powerful when equipped to Merieke herself, letting us steal two creatures with one tap.

Another powerful equipment with Merieke is Umbral Mantle. The Mantle allows you to pay three mana to and untap a creature to give it +2/+2 until end of turn. That power boost won’t really matter in most cases, but Merieke loves being untapped. With Umbral Mantle equipped, we can hold back mana, bluffing counterspells or other interaction, and then tap and untap Merieke two or three times in rapid succession.

Finally, Thousand-Year Elixir lets us untap a creature for one generic mana, and essentially grants our creatures haste. Haste is incredibly valuable in this deck, letting us use Merieke or any of our other creatures on the turn they come down, making it much more difficult for our opponents to remove them cleanly. For some redundancy, let’s also include Swiftfoot Boots and Lightning Greaves.

I also want to include two untap effects not found on Merieke’s page. The first, Dramatic Reversal, comes from my own experimentation. Early in the game, Dramatic Reversal can help by untapping mana rocks, and later on, it untaps Merieke as well as our other untap effects, letting us push through the final few activations we need to keep the field clear.

The second comes from Niv-Mizzet, The Firemind's page, and that's Mind Over Matter. Its mana cost may seem prohibitive, and it is not easy to cast by any measure, but it offers a powerful effect. Being able to untap Merieke four to seven times in a turn for free can be backbreaking for our opponents, not to mention any of the other creatures in the deck we can tap for an advantage. Additionally, there are several cards that let us draw whenever a creature dies. Paired with Mind Over Matter, these essentially let us destroy every creature in play while filtering our hand, and that is an interaction too powerful for me to ignore.

Of course, with all these ways to untap creatures, we’ll need more than just one creature to tap. Several of these will tie into our graveyard shenanigans down below, but I want to mention Arcanis the Omnipotent and Archivist before moving on. Arcanis appears on Merieke’s page, and I think Archivist should as well. Archivist is much less threatening than Arcanis on its own, and can still draw your entire deck when paired with Aphetto Alchemist and Illusionist’s Bracers or Mind Over Matter.

Bring Out Your Dead

Merieke has a powerful tap ability, but that is shared by several other creatures. What makes Merieke unique is the clause of her ability that destroys the targeted creature when she untaps or leaves play. That could be a drawback, but here on Conditions Allow, we're turning it into a benefit! Merieke's EDHREC page doesn’t present many cards that interact with this death trigger, so let's take hints from some other commanders and strategies.

My first stop for inspiration are the popular Mill commanders, which steal creatures from our opponents’ graveyards. Since Merieke can cause so many creatures to kick the bucket, we might as well steal them again from the grave. Phenax, God of Deception and Lazav, Dimir Mastermind are both commanders that aim to fill and interact with other people’s graveyards. In fact, so let’s take a look at their pages and see what we can learn.

Now, onto the lists. Among Lazav’s Signature Cards is Dimir Doppelganger, which can exile a creature from a graveyard to become a copy of it. Thematically, I really like this kind of effect. We can steal a creature and then, when it dies, steal it again from the graveyard while stopping our opponent from bringing it back themselves. The Scarab God also appears on Lazav's page, and it has a similar effect to the Doppelganger. Both of these cards appear on Phenax’s page as well, which is enough to convince me that they are powerful. Into the list they go.

Mimic Vat also appears on Lazav’s page, and it has a similarly useful ability. Whenever a creature dies, you can Imprint it under the Vat, then use it to create temporary token copies of that creature. This holds a creature hostage and allows us to create multiple copies, either to sacrifice, to attack with, or to abuse an enters-the-battlefield trigger. Just keep in mind that if you want to Imprint a different creature, the first will be returned to its owner’s graveyard. In a similar vein, Coffin Queen can resurrect a creature from a graveyard, but when it becomes untapped or leaves play, that creature is exiled.

Returning to Merieke’s page, I want to include Adarkar Valkyrie. By targeting a creature we have stolen with Merieke, Adarkar Valkyrie will return that creature to the field under our control after we untap our commander. This effect can also be used in response to removal or before combat damage is assigned to steal creatures that die as a natural course of the game. I'd also like to include Fool’s Demise, a card I've been trying to fit into a deck ever since I tried to build Bruna, Light of Alabaster. For five mana, Fool’s Demise can enchant a creature and, when that creature dies, return it to the field under our control. Then, Fool’s Demise will return to your hand, ready to repeat the process over again.

The final piece of the puzzle is death triggers. On our path to animating the dead we’ll be killing a lot of creatures, so let’s see what cards Aristocrat strategies use to take advantage of creatures dying. Harvester of Souls, Grim Haruspex, and Midnight Reaper will let us draw every time a creature we control dies, which should happen pretty often with Merieke. These cards gain extra power when paired with Mind Over Matter, letting us pitch the cards we draw to untap Merieke, destroying a creature, and drawing again. Zulaport Cutthroat and Blood Artist then turn each of those deaths into damage for our opponents, while Pawn of Ulamog and Pitiless Plunderer generate mana.

We don’t want to rely on just our commander to create these death triggers. From Merieke’s EDHREC page we can take Mortify, Ruinous Path, and Murder. I also want to make sure we can handle indestructible permanents, so Utter End and Swords to Plowshares come in as well. Supreme Verdict is an excellent board wipe, and Rout can take opponents by surprise at instant speed. Finally, Merieke will draw a lot of hate once people experience how strong she is, so I’m going to add Negate, Dissolve, and Render Silent as protection.

Now that we've built around Merieke's abilities - the good and the bad - let's see what the full list looks like.

If you find your meta runs more creature removal, you can increase the number of counterspells in the deck, but I find Merieke is most fun when I avoid playing her as a control deck. This list is a midrange strategy, capable of winning with combat damage or assembling a combo. Which avenue you end up pursuing will vary game to game, as you react to what your opponents are playing. The most important skill to playing this deck well is keeping track of the abilities of every single creature in play, because you can quickly assemble a winning combination from your opponents' creatures if you are paying attention.

That's it for this Conditions Allow! Which commander's drawbacks do you most enjoy building around? Which would you like to see in future articles? Let me know in the comments!