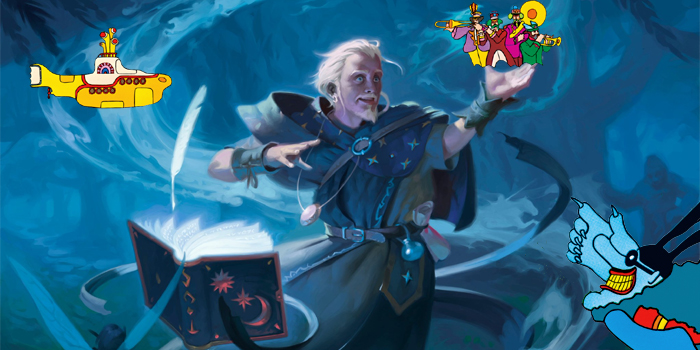 While My Guitar (and Playgroup) Gently Weeps

Welcome back to Power Sink, where we say we want a revolution. We all want to change the world, but for now we're working on how people approach the boogeymen of Commander. This time, we'll be talking about Chulane, Teller of Tales.

With over 4,000 decks and ranked #10 overall, Chulane sits comfortably near the top of the EDHREC charts. What is it that has fans and detractors of this commander screaming until they faint in their seats? First of all, Chulane lets you draw a card and put a land into play for simply casting a creature spell. Every Commander deck needs ramp and card draw, and Chulane provides exactly that as long as you can keep him on the field and have a creature to play. If for some reason you don't have a creature to cast, Chulane can also bounce a creature so you can recast it. This ends up being a self-perpetuating engine, as getting more cards and lands means you are likely to find another creature to keep going.

The colors that make up Bant already have a long history of ETB value with legendary creatures, like Roon of the Hidden Realm and Brago, King Eternal paving the way, making Chulane capable of some truly epic turns. While this seems great, it often leads to opponents spending a lonely lifetime waiting to get back to their turn. Based on his colors alone, Chulane has some of the best options in the format for ramp, card draw, and removal, and that's before getting into any specific strategies. This is why, aside from being known as an overpowered commander, having Chulane in the Command Zone is widely considered to be playing on easy mode. Let's take a peek at the average Chulane deck to see what else is happening.

Unsurprisingly, there are a lot of creatures in the average deck. Mana dorks, like Birds of Paradise and Avacyn's Pilgrim, come down early and ensure the commander is online quickly, and since they're cheap to cast, they can get us a card and a land for minimal investment. We also see numerous utility creatures, such as Frilled Mystic, Reclamation Sage, and Eternal Witness, which can be reused by Chulane's bounce effect.

Chulane is also employing a number of creatures like Shrieking Drake that bounce a creature upon entering the battlefield, so they can be recast multiple times to rip through our deck and power out a bunch of lands. These become much more dangerous when combined with Intruder Alarm, which untaps all creatures whenever another creature enters the battlefield. With mana dorks and self-bouncing creatures, it's a simple matter to draw your whole deck and get all the mana you need to win the game with something like Thassa's Oracle. Chulane can also lock opponents out of the game by bouncing and recasting Eternal Witness to recur Cyclonic Rift every turn, and while Chulane isn't the only commander that can facilitate this, he has a particularly easy time getting to the 13 mana required to pull this off.

Aside from combos, there are also ways to take the game with combat. God-Eternal Oketra can make an overwhelming number of Zombies in a deck like this, and with all that mana we can generate, it's a simple matter to cast a huge Finale of Devastation in preparation for a giant swing.

So how do we tell Chulane, "don't make it bad"? Can we take the sad song that he brings to Commander pods and make it better?

As mentioned previously, much of Chulane's power comes from his colors, so we're going to employ a deckbuilding process I like to call "color cropping." This is where you take a commander with a multicolor identity and use it to build a deck with fewer colors than it has available. Chulane already provides his own ramp and card draw, so I don't think he needs the best colors for it. We're saying goodbye to blue and green and building a mono-white deck (except for Chulane himself), cutting 51 cards from the average deck and rebuilding it into a mono-white blink/bounce deck similar to something you'd see from God-Eternal Oketra.

With a Little Help from My Friends

Since we're losing out on the usual combo lines available to Chulane, we're going to have to win on the combat step. Thankfully, white is great at token strategies, and we have a number of options available to us. Oketra's Monument is incredible in this deck as it gives us a discount on nearly all our creatures, and since we are going to be bouncing and recasting our creatures, we can make a lot of tokens with this. We have her Monument, so naturally we're also running God-Eternal Oketra.

Speaking of bouncing our creatures, Stormfront Riders will give us a token each time we do that, and the riders are capable of bouncing themselves if you really need it. Reverent Hoplite and Evangel of Heliod are great to blink and bounce, giving us tokens equal to our devotion to white.

We're taking advantage of Chulane's ability to put lands on the field by running several Landfall effects. Emeria Angel will make us a flier whenever we drop a land, while Retreat to Emeria and Felidar Retreat can give us tokens or give our team a boost if we want to swing. Finally, if we get to the late game, we can sink our mana into Finale of Glory to make a bunch of creatures.

Unfortunately, many of the tokens we're creating are lowly 1/1s, and they just aren't going to get the job done most of the time. We mentioned getting a boost from Landfall with Retreat to Emeria and Felidar Retreat, but we're also using Canyon Jerboa. With so many creatures entering the battlefield, it's worth it to deal with the bookkeeping nightmare that is Cathar's Crusade.

My personal favorite team-building effect here is Charge Across the Araba. Sure, sweeping up a bunch of lands is risky, but our commander can help us get them back on the field if we don't win the game. In the event we can't outnumber our opponents' creatures, we have a couple tricks up our sleeve for evasion. Victory's Herald gives our creatures flying and lifelink whenever it attacks, and we can use Odric, Master Tactician to stop our opponents from blocking at all. Akroma's Will is incredible in this deck, as it doubles as a way to protect our board as well as a finisher.

As it turns out, mono-white isn't too bad at mining Chulane's abilities. Whitemane Lion, Stonecloaker, and Kor Skyfisher can bounce themselves allowing us to draw several cards from our commander while dropping any lands we happen to have. Shepherd of the Flock can be cast as an Adventure to return any permanent, and after we cast it later as a creature, Chulane can bounce it back to our hand to reuse the Adventure. Erratic Portal not only helps us reuse our creatures, but can work as removal if an opponent taps out.

Since we want to recast our creatures in this deck, it makes sense to use ones with ETB effects to get extra value. For extra card draw, we have things like Priest of Ancient Lore and Skyscanner. Fiend Hunter and Leonin Relic Warder become repeatable removal. Karmic Guide and Sun Titan are there to retrieve any cards that meet an untimely end.

We've reached the end of the Magical Mystery Tour of mono-white Chulane. Color cropping isn't the only way to power down a Chulane deck, though. I think he's an excellent commander for those tribal decks that REALLY need the support. Commander Cookout did a fantastic episode on a listener submitted Crab Tribal deck, and if you do a deep dive on EDHREC themes for Chulane, you can find some Kithkin Tribal decks.

In a recent Twitter conversation, Thomaz Sardinha showed off his Chulane, Dungeon Master deck, which uses the commander to bounce and recast creatures that venture into the dungeon. He also works at the head of a sea monsters deck with all the extra mana he provides, and you can bill him as the crazy captain spinning tales of the monsters he's encountered. Taking a page from my first article, Chulane would even be great for a "Gumball" deck, as all those 25-cent cards will keep him from getting out of hand.

Are there any fun, low-powered deck ideas you have for Chulane? Maybe an unsupported tribe or some other idea? Maybe there's another commander you want to try color cropping. I'd love to hear about it in the comments.