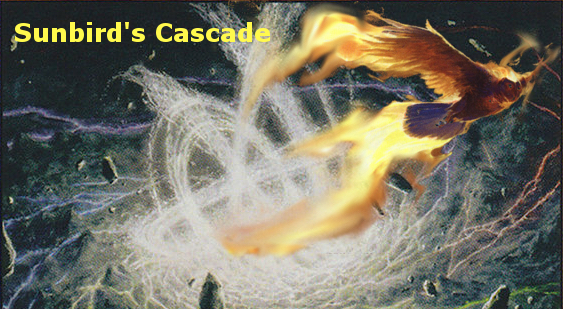 Guess who's back! Patrick Sippola is back and better than ever, and I'm here to crack some mad, homebrewed combos on you with a smile on my face and the stack as confusing as possible. At least that is going to happen this time around, where it isn't a particular card I'm going to build around, but a triggered ability.

The keyword we're looking into this time around just recently got a little more complicated with the printing of the card Sunbird's Invocation. It's a particularly strong card in any deck that has lots of mana and splashy spells. Which pretty much makes this a staple in EDH going forward. The problem is how it interacts with the triggered ability, Cascade.

Looking into the rules can sometimes be daunting, and confusing to actually figure out what is going on, even for a number of experienced players. Just to be clear, I'm not a level 3 judge, nor am I a judge at all. I am but an enthusiastic player who happens to know a few judges and does not mind asking the tough questions. Like “who is the dreamiest pro magic player currently active?” In other words, the questions judges love to answer.

Cascade: for Virtually Spotless Board States

The first thing we can do is just look at the specific rules text in the Comprehensive Rules for Magic: the Gathering and see if this will clear up any confusion.

702.84. Cascade
702.84a Cascade is a triggered ability that functions only while the spell with cascade is on the stack. “Cascade” means “When you cast this spell, exile cards from the top of your library until you exile a nonland card whose converted mana cost is less than this spell's converted mana cost. You may cast that card without paying its mana cost. Then put all cards exiled this way that weren't cast on the bottom of your library in a random order.”

Ignoring what Cascade actually does, we see that it is cast trigger, and not resolution or enter the battlefield trigger. Which means that the spell we cast from the trigger will resolve before the spell we cast. But what happens when we add Sunbird's Invocation to the mix?

To set up the board state to help explain what is going on, let's enter the battlefield of our mind, with Sunbird's Invocation on the board and it's our turn. Next, in our hand we have a spell with cascade already, let's choose an oft-reprinted creature in commander decks, Etherium-Horn Sorcerer. We go through the motions, pay the mana cost by tapping lands and signets and finally cast our artifact creature.

Things now seem much more complicated than they should be. Sunbird Invocation's trigger of “whenever you cast a spell from your hand” pops up, and so does the the Etherium-Horn Sorcerer's Cascade trigger. Let's look at the relevant rules text once again.

405.3. If an effect puts two or more objects on the stack at the same time, those controlled by the active player are put on lowest, followed by each other player's objects in APNAP (Author's note: This stand for Active Player, Non-Active Player.) order (see rule 101.4). If a player controls more than one of these objects, that player chooses their relative order on the stack.

Since we own both triggers that are going to be put on the stack, we can choose which order we want to put them on the stack. Once priority has been passed around the table, the triggers resolve in FILO (First In, Last Out) order. This means in our example we can choose to put the cascade trigger of the Etherium-Horn Sorcerer onto the stack first, and then Sunbird's Invocation trigger second, letting us resolve the Sunbird's Invocation trigger of looking at the top six cards and casting a six CMC or less spell from among those for free. Or vice versa for that matter. We're going to assume that we just cast a Sol Ring from those six, resolve that wonderful artifact ramp and we can move onto the cascade trigger.

Now that we have the basics down, we can move onto some of the more complicated things that can happen with cascade. For instance, cards can have more than one instance of cascade on them, outside of Maelstrom Wanderer that is. This means that each instance of Cascade will trigger separately. This is the line of thought that led to this deck.

The goal is pretty simple, see how many times we can Cascade or pseudo-Cascade from one spell. We could have accomplished it with a Yidris commander and go for an infinite attack step combo, but that would end the game before we get through out deck. Not quite as fun as manically putting together all the pieces here.

The first thing that we should talk about is Rebound and Cascade. These two keywords do not appear together natively on a card, but both are able to be applied to your spells through enchantments or creatures. If Cascade is applied with Maelstrom Nexus onto Recurring Insight, we will get both instances. When Recurring Insight is placed into exile, waiting to be cast for free on our upkeep, it does not have Cascade on it anymore. If we're lucky though, the Nexus will still be out and we haven't cast any other spells this turn, we will get a second Cascade trigger during our upkeep and feel like we are cheating by getting all this value. This also works the reverse way when using Cast Through Time.

The only problem with this whole plan is if we Cascade into a Rebound spell. We will not get to put that spell into exile to cast again. Sadly, Rebound checks to see if the spell was cast from our hand.

In the realm of more bad news, Sunbird's Invocation also checks to see if a spell was cast from your hand or not. This shouldn't bother us too much because at this point we're casting so many free things that I have a hard time containing my excitement.

First and foremost, the worst enemy of this deck is our own stack, and not getting confused as to exactly is going on. This is a deck you should goldfish a couple of times before you unleash it on your friends, but only if you still have friends at the end of the stack resolving. Your goal while practicing with the deck should be focused on remembering to put spells on the stack in the right order, and then resolving them one at a time. Shortcutting isn't going to be great here, but you want to be as speedy as you can be.

Since we mostly care about casting the spells and not the resolution of the spells, the usual suite of counterspells does not really matter all too much. The annoying spell to look out for is Summary Dismissal, that could eat a whole turn's worth of mana and plans.

I'm sure I've missed some pseudo-Cascade cards, and I would love to hear what they are. This is the kind of build where you get to jam in some of your favorite pet cards, which often end up being the best decks to play when you are just looking to have fun, and not just win. It's like a chaos deck, but only for your deck and then you cast your whole deck on accident.