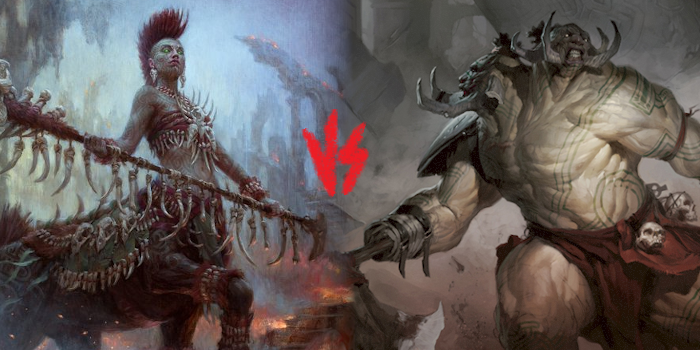 (Nikya of the Old Ways by Ryan Pancoast | Ruric Thar, the Unbowed by Tyler Jacobson)

The holidays are here, the halls are decked, and we're surrounded by decorations in festive colors of red and green. What else is there to do but embrace the spirit of the season and tap into our own inner red-green player? You've heard of the Yuletide, now get ready for the Gruultide!

Ruric Thar, the Unbowed and Nikya of the Old Ways are so red and green that it hurts. Literally. One of them actually hurts players whenever they cast noncreature spells. The other shuts down your ability to cast those types of spells altogether, but in exchange, will double your mana.

If you're looking to smash face with a gang of creatures, which of these Gruulmanders is right for you? Let's find out on this week's Commander Showdown!

I gotta be honest, Ruric Thar, the Unbowed feels like it was made specifically to hurt my feelings. I play black. I play Reanimates. I do enough damage to myself, I don't need Ruric up in here making it even worse.

This is what makes Ruric Thar so wonderful. Six damage is hefty. Anyone who casts a noncreature spell has to mean it. This is one of the reasons Ruric has become a haven for Werewolf players who were (justifiably) disappointed by Ulrich of the Krallenhorde. Commander games are usually full of spells every turn, but Ruric's punishment is so scary that it actively discourages enemies from playing nasty spells that would get in his way. He has to attack every turn, too, but since he has vigilance and reach and commands a respectable 6/6 body, this isn't a downside so much as a general reminder of how he's planning to crush you.

Ruric applies his spellcasting restriction to us, as well, but we're ready for it in ways our enemies will not be. Ruric doesn't just play a bunch of creatures instead of other spells, but also plays creatures that specifically care about other creatures. For instance, Beast Whisperer, Primordial Sage, and Soul of the Harvest all reward a creature-dense deck.

This also has an important impact on Ruric's ramp. We're slightly discouraged from playing the traditional Cultivate, instead opting for creature-based ramp options like Birds of Paradise and Farhaven Elf. Not only that, but cards like Somberwald Sage signal Ruric's focus on speed. Ruric wants to jump into play ASAP, to prevent opponents from deploying their Sphere of Safetys and Smothering Tithes without proper punishment.

Ruric also reminds us to look for creatures with abilities traditionally found on instant and sorcery spells.

For instance, Acidic Slime, Reclamation Sage, and Bane of Progress will be far more desirable than any Return to Nature or Vandalblast. We don't need an Overwhelming Stampede when we have Pathbreaker Ibex instead. Who needs a red damage spell when Balefire Dragon can deal all that delicious damage for us? Plus, a card like Xenagos, God of Revels can fly under Ruric's radar and serve time as an enchantment without hoisting us by our own petard.

All of this begs the question: what noncreature spells does Ruric play? Which spells, if any, are worth the risk of six damage? Let's take a look at a potential Ruric decklist.

I personally group the noncreature spells for Ruric into three camps. The first is the "Pre-Ruric" camp. Lightning Greaves or Elemental Bond, for instance, can be deployed before Ruric enters the battlefield.

Second is the "Post-Ruric" camp. These help him claw back into the game, and you may not play them unless Ruric is, himself, absent from the field. Blasphemous Act, for example.

Third is the "Worth It" camp. These cards are worth playing even if Ruric deals damage to you. I'll happily take six damage if it means Heroic Intervention saves my board of creatures from a Wrath effect!

Don't be fooled, there aren't a bunch of noncreature spells in the deck. The few that are there, however, seem to fall into these categories, and it's important to know the circumstances in which your spells are most optimal.

I have a few other suggestions to play in this "Worth It" category, but we'll have to save them for later. We have another Gruul beastie to discuss.

Nikya of the Old Ways takes Ruric's restriction to a whole new level.

With Ruric, we at least have the option to play noncreature spells, even if it hurts. Nikya, however, stops us from playing them altogether. In exchange, she doubles our mana. We're obviously still sticking to the Gruul beatdown plan, but how does this modify our approach?

Well, let me show you one of the funniest pie charts you'll ever see: Y'all. She plays 55 creatures. Her Average Deck contains like maybe six total noncreature spells? Only 25% of Nikya players even play Sol Ring, and I can't say I blame them.

Now, we have some really great synergies for Nikya's abilities. Heartwood Storyteller will basically never trigger on ourselves. Magus of the Candelabra untaps our lands, which Nikya has doubled, giving us a substantial mana boost. Powering out a Nullstone Gargoyle feels amazing, forcing a simulacrum of our own restriction onto our opponents.

The thing is, noncreature spells are really dang powerful. We can't survive on big creatures alone. We really do need to be able to access at least some of those abilities, even with this restriction. So what do we have?

Turns out, tons. Activated and triggered abilities are our best friends. Need to protect your board? Soul of New Phyrexia and Spearbreaker Behemoth can help. These cards are usually unwieldy in other decks, given their extraordinarily high mana costs, but Nikya looks at these mana costs and laughs, effectively cutting them in half. Hellkite Charger even allows us to Aggravated Assault our enemies on the cheap.

Noncreature spells in Gruul are typically there to help us maintain card advantage. Rishkar's Expertise and Harmonize, for instance. These give you something to spend all your mana on. Well, Nikya has a lot of mana, and mana sinks are the perfect thing to spend it on. Duskwatch Recruiter will keep her flush with cards, and I'm frankly terrified of a Nikya player who has a lot of mana to spend on a Rhonas, the Indomitable.

Finally, lands can do a lot of heavy lifting. Kessig Wolf Run is genuinely fearsome. Scavenger Grounds helps us keep graveyard players at bay. (Again, as a necromancy player, these Gruul commanders will be the death of me!)

This is a whole lot of talk, though, and I know Gruul doesn't exactly like it when we think too much. Let's get to an actual list.

I also frankly adore Cycling lands here, like Forgotten Cave and Slippery Karst. As a creature-based deck, we're afraid of Wraths that dramatically set us behind on card advantage, and drawing useless lands will hurt us. Nikya will happily flit away a late-game land to find something more suitable.

As they say, restrictions breed creativity, and Nikya has one of the most domineering self-restrictions in the game. For being Gruul, a guild that diametrically sets itself against thoughtfulness and reason in favor of power and impulse, Nikya sure has her wits about her. Her card choices aren't just 'big dumb creatures,' they're thoughtfully chosen. And frankly, nothing should scare you more than a Gruul commander who's also super smart.

You may notice that I split the massive number of creatures in the Nikya decklist into two categories: regular ol' creatures, and a 'big mana' section. These are the creatures that I really only felt comfortable playing because of Nikya's particular abilities. I think this is one of the most important facets of her deck, and the thing that sets her and Ruric apart.

Ruric Thar, the Unbowed is punishing, beating down upon his enemies in haste, and sometimes with haste. He puts enemies between a rock and a hard place; his abilities don't mean much if you're not forcing your enemies into tough situations where they want to play a sorcery to help them get out of the mess you've made, but they can't or else they'll get hurt. Nobly, Ruric may even be willing to take one for the team, risking life points to play a noncreature spell that will improve or even save the lives of his guild. Ruric is a capstone to the aggressive strategy, his abilities best supported when his creatures rush him into play and then rush into the red zone.

Nikya of the Old Ways, by contrast, is the enabler. She facilitates the deck, which means it may stumble somewhat without her, but at peak performance, she powers out some of the most fearsome monstrosities the game has ever seen, and all with apparent ease. However, hiding behind that fairly simple idea lies a truly clever soul, one who doesn't just power out creatures, but creatures who will properly capitalize on her doubled mana. She won't just play lands, but lands that mimic spells. She's practically a magician, concealing instant and sorcery effects under the guise of simplicity.

Underestimate these commanders at your own risk.

I'd like to wrap up by taking a close look at some cards that neither commander has given a lot of love, but that I think could really make or break the game if you give them a chance.

So, which of these legends would you like to lead your Gruul riot? Do you love Ruric's punishing leadership, or Nikya's creative restrictions?

Oh, and which merry pair would you like to see on the next Commander Showdown?

#gruul, #nikya of the old ways, #not gruul then die, #ruric thar the unbowed