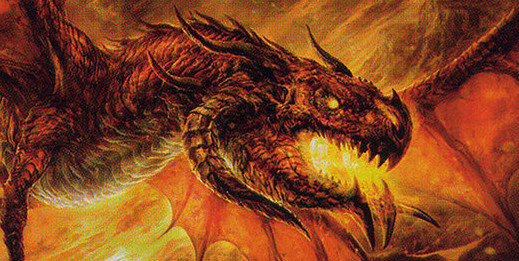 Hello, and welcome back to Conditions Allow, where I take a legendary creature with a drawback and build a deck to turn it into a strength. This week is a special occasion, because this is the last Conditions Allow that will be posted on EDHREC. The series isn’t over, though. Going forward, you can find it at commandersherald.com, a new companion site to EDHREC. To celebrate, I’m returning to my roots and revisiting a mechanic I tackled in my third ever article on EDHREC: Grandeur. Grandeur is an ability that appears on a cycle of five mono-colored legendary creatures. For my second attempt, I’m tackling Tarox Bladewing.

Tarox Bladewing is a decent candidate for a Dragon Tribal commander. At five mana, it’s relatively cheap and capable of pressuring life totals early. We’re going to be focusing on its activated ability, however. By discarding another card named Tarox Bladewing, we can give our commander +X/+X until end of turn, where X is its power. Much like Xenagos, God of Revels, this has the potential to make Tarox very big, very fast. Static power boosts, such as Crucible of Fire, get doubled as well, easily putting Tarox Bladewing in range of killing a player in one shot.

The only problem is getting our hands on a second copy of Tarox Bladewing to discard. Due to the singleton nature of Commander, we’ll need to be able to make a token copy of Tarox, then get the original back into our hand to launch our alpha strike. Luckily, Tarox Bladewing has six decks on EDHREC, so we won’t have to go in totally blind.

In those six decks, however, there is a huge amount of variety. Two decks are playing Ulamog, the Infinite Gyre, and one is playing Shivan Phoenix, but all six agree that Tarox has to be playing Molten Echoes.

Red is not a color known for making token copies of creatures, but we do have a few solid options. Molten Echoes is by far the easiest to use. Simply choose ‘Dragon’ when it enters the battlefield, and we’ll get a token copy of our commander whenever it enters the battlefield. Flameshadow Conjuring isn’t restricted by type, but it does require us to pay one red mana to get the token. That does mean, however, that we can use it to copy Dockside Extortionist before casting our commander. My favorite token-maker is Flamerush Rider, but it’s easily the hardest of these three to work with.

Of course, if we just make a token of Tarox Bladewing, we’ll be immediately forced to sacrifice one of our bladewings due to the legend rule. Luckily, we don’t actually want two copies of our commander in play. With the trigger from Molten Echoes or Flameshadow Conjuring, we can activate Sanctum of Eternity or Erratic Portal to return our commander to our hand. Then the ability of either enchantment can resolve, creating a token copy of Tarox Bladewing. Flamerush Rider works a little differently. If we bounce Tarox with the Rider’s ability on the stack, no token will be made. Instead, we’ll have to sacrifice the original to the legend rule, so we can put it in our hand with Command Beacon.

If you’d rather not contend with circumventing the legend rule, Helm of the Host is the card we should be looking for. Alternately, if we’ve already discarded Tarox Bladewing once, God-Pharaoh’s Gift can exile it to create a 4/4 Zombie version. This gives us a chance to put Tarox back in the command zone. Both of these artifacts are also more flexible than Molten Echoes or Flameshadow Conjuring. God-Pharaoh’s Gift, in particular, can be used to get extra copies of valuable utility creatures, like Combat Celebrant or Neheb, the Eternal.

Another important aspect of Helm of the Host and God-Pharaoh’s Gift is that the tokens that they produce won’t disappear at the end of the turn. The tokens from Molten Echoes and Flameshadow Conjuring are both exiled at the beginning of the next end step. The token from Flamerush Rider won’t even last past the end of the combat step. Of course, we could prevent the tokens from disappearing with Sundial of the Infinite, but it feels more appropriate to just try and win instead.

The most efficient way to do this is with one of the new damage-triplers. Gratuitous Violence and Dictate of the Twin Gods both show up on Tarox Bladewing‘s EDHREC page, but I don’t think they’re right for this deck. We don’t have much in the way of defense, so doubling the damage dealt to us just makes it easier for our opponents to take us out. Fiery Emancipation, on the other hand, only triples the damage permanents we control deal. It also lets Tarox Bladewing deal twenty-four commander damage with a single activation of Grandeur. Jeska, Thrice Reborn does the same, but we can’t cast her ahead of Tarox. If we did, she’d enter with zero loyalty and immediately hit the graveyard.

We can also double the Grandeur activation to massively increase Tarox’s power. Because Tarox buffs itself equal to its power, the first ability will resolve and put it at eight power, so the second pushes our Dragon to sixteen power. Keep in mind, however, that usually we’ll need to cast and bounce Tarox Bladewing on the same turn we’re trying to win. Activating either Lithoform Engine or Rings of Brighthearth on the same turn will require a fair amount of mana.

Our final ways to make Tarox hit as hard as possible are anthems and double strike. We only need to get Tarox Bladewing up to six power for it to deal lethal commander damage with double strike and Grandeur. If we’re really in a pinch, instants like Temur Battle Rage and Assault Strobe are a decent stand-in for Grandeur itself. If you can, save them in case your first attack is stopped so you can more easily go for a second attempt.

Attacking All of the Opponents

We also have to remember that Commander is a multiplayer format. Knocking one player out of the game doesn’t do us much good if our other two opponents will kill us right after. This is particularly a problem for this deck, since our primary attackers are the tokens created by Molten Echoes and Flameshadow Conjuring. They’ll only stick around for a single turn. We’re going to need a couple more combat steps.

Tarox Bladewing‘s EDHREC page features Relentless Assault and Aggravated Assault, but our list is going to need a couple more extra combat spells. Combat Celebrant and Scourge of the Throne are both perfect for us. They don’t have to deal damage to get the extra combat, and both can be played ahead of time to help us spread the cost of our combo over multiple turns. Port Razer, on the other hand, does have to deal damage, but has the potential to let us attack each opponent all on its own.

If we can’t deal enough damage to take each opponent out in a single hit, we could need more than three combat steps. The best way to do that is with Aggravated Assault and Neheb, the Eternal. As long as we’re dealing five or more damage during each combat, Neheb will generate enough mana to activate Aggravated Assault as many times as we need to end the game.

Putting it All Together

This deck can deal a lot of damage, but it needs to put the right cards together in order to do so. Luckily, red has been getting a lot of great draw effects recently.

I’m including the full suite of discard-based draw spells that red has access to. As an aggressive combo deck, we want to find the pieces that we need to win as fast as possible. Birgi, God of Storytelling is the perfect card for this deck. If we need to dig for a specific card, we can cast it as Harnfel, Horn of Bounty and chew through our deck. Pair the Horn with Bag of Holding to save important cards, and you can refill your hand to keep digging on the next turn, too. If we draw her later, though, Birgi, God of Storytelling lets us stretch our mana as far as possible.

Our goal is to win on the same turn we cast and copy Tarox Bladewing. This means that we need five mana to cast our commander, three mana to bounce the original with Sanctum of Eternity, and then still have mana left over to cast Jeska, Thrice Reborn, Temur Battle Rage, or Seize the Day. Birgi, God of Storytelling makes each of those spells cost one mana less. To supplement her, we’ll play Mana Geyser and Dockside Extortionist as additional sources of bursts of mana. Captain Lannery Storm can also build up a small stockpile of Treasure, along with as many mana rocks as will fit into the deck.

Revisiting Grandeur was a lot of fun. Even though they’re built around the same mechanic, Tarox Bladewing and Linessa, Zephyr Mage (who I wrote about previously) play very differently. The difference largely comes down to how each color makes token copies of creatures, rather than the effects themselves, too. Tokens from Molten Echoes only last a single turn, so the deck has to try to win on that turn.

Let me know what you think, though. I could have focused more on Helm of the Host to play a little less all-in. Would that be more effective? If you’ve played with Grandeur before, let me know what your favorite cards were in the comments below. And, as always, thank you for reading. This will be the last Conditions Allow posted on EDHREC, but the series will continue at commandersherald.com. I look forward to seeing you there.