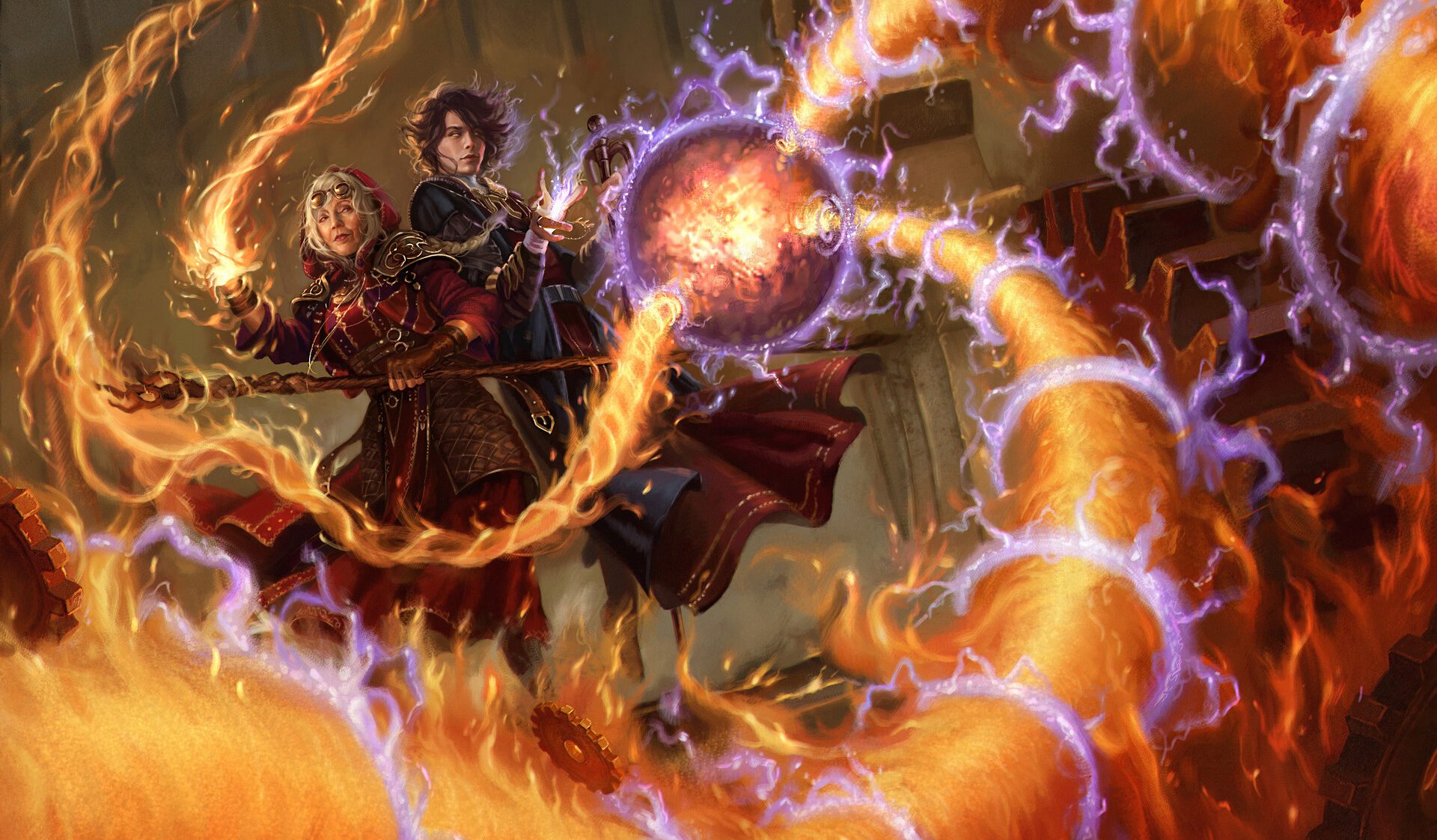 Fanning the Flames of War

Even if some sparks dwindle and fade, darkness can never overcome the light! The Phyrexians have invaded, and we've lost some beloved heroes, but we can't let that get the better of us. Let's take a look at the new red spells that we'll be able to use to fight and destroy the evil Phyrexians!

Jaya, Fiery Negotiator feels like a well-rounded planeswalker. The +1 ability gives you a blocker to protect her that can grow as we cast spells, -1 is card advantage, -2 is removal, and the -8 ability is great value, but something I wouldn't bet on with a loyalty of four.

Spellslinger decks that make tokens, like Kykar, Wind's Fury, or that care about having a lot of creatures will see mileage out of Jaya. However, spellslinger decks that don't have many creatures probably won't care about making 1/1s with prowess, and four mana for the -1 ability isn't great, especially since you have to play the exiled card this turn, unlike Tectonic Giant.

A mana sink Dragon that'll certainly kill at least one player at the table when it comes down isn't bad at all. Combine this with the likes of Warstorm Surge or a Fling spell and you have a scary Dragon on your hands. This slots in very nicely in the 99 of Miirym, Sentinel Wyrm decks, which will be able to make an additional copy of Shivan Devastator, making it twice as deadly. Dragon decks (and maybe the occasionally red Hydra deck) will enjoy having a new way to alpha strike an opponent.

Don't discount this card in +1/+1 counter decks, either! With a Branching Evolution effect or two, paying just six mana could easily create a hasty flying 20/20. Rosheen Meanderer or any commander that likes to play the card Unbound Flourishing should take note of this cool new mythic.

A Chaos Warp that targets one of each permanent type? This card is sweet! It's not a proper board wipe, but it'll help red players be able to answer anything at the table. Plus, it's a new way for red to deal with enchantments! Well, I should correct myself and say that it's more like the new Wild Magic Surge, so opponents will get a guaranteed permanent in return for whatever is removed.

It's entirely possible that by removing one threat, we create another. Chaos is in the name, after all, and that's exactly what will happen if we help an opponent flip into one of their wincons. But imagine using Chaotic Transformation on your own board. Maybe you've been manipulating the top of your deck and know what you'll be flipping into. That could be a real game-changer.Vaevictis Asmadi, the Dire players know that you can get a lot of bang for your buck when you carefully select your targets. Either way, I'll be looking for room in my mono-red deck for this card. If nothing else, it's absolutely worth trying out.

This might end up as the least popular of the Defiler cycle. I actually really like the design, I like how cheap it is to cast, and I like picking off chump blockers! However, some of the other Defilers have more noteworthy bonuses than single pings (such as drawing cards) as well as creature type lines that have homes in tribal or theme decks, whereas Defiler of Instinct doesn't have a dedicated Kavu commander deck to call home just yet. My main hesitation on this card is that, like all the Defiliers, it only affects permanents. Does your average red deck contain enough permanent spells to make this worth the inclusion, and can that deck afford to lose this much life? I think Greven, Predator Captain is a good place to try this out to start with. Don't discount this card, but I get why its impact will likely be minimal.

The Elder Dragon War is a good example of why I think the Read Ahead mechanic will lead to some very unique designs for future Sagas. Skipping ahead to different chapters allows us flexibility, depending on the board state we currently have. If we don't want the board wipe on chapter one, we can skip it and filter out any cards we don't need.

However, I don't think The Elder Dragon War will see much play. Dealing two damage to each creature for four mana is hardly worth it when we already have options like Chain Reaction, or even cheaper options like Blasphemous Act. The second chapter isn't putting us up on cards either. Unless your deck wants the discard or things in the graveyard, I just can't see The Elder Dragon War making an impact.

Wow! Okay, so let me get this straight: attack with Keldon and Enlist Kalamax, the Stormsire, find the best instant among the top X cards, and then play it for free and copy it? That's some serious value. Is this the strongest Enlist card from the set?

The part that I'm worried about here is that toughness. Sure, she'll be big, but if we want to attack with her every turn, we'll need a way to either protect her or give her evasion. She'll fit in great with commanders that either have naturally high power or in decks like Xenagos, God of Revels that can boost her power and toughness.

She's also a Shaman that'll trigger twice off of Harmonic Prodigy, which is noteworthy. Rionya, Fire Dancer decks will love to have both of these in the 99, especially since Rionya can copy Keldon for tons of value. Even if you don't Enlist with each copy made, you can just stack the triggers and repeatedly look at the top two, find a spell, play for free, rinse and repeat.

At two mana, this is a cheap Warrior that can slot into Najeela, the Blade-Blossom decks. However, I don't think Najeela players would even have room for one with such a weak effect. Dynaheir, Invoker Adept decks can may be able to double the activation cost, but if it's reduced to three mana from having three land types, then I guess it wouldn't work there either. Only being able to make one target creature unable to block isn't strong in Commander, and I don't think Radha's Firebrand will see much play except for a very specific Domain themed deck.

An excellent new Goblin lord that'll give us impulse draw when we sacrifice our Goblin friends for a better cause. You won't find much use for Rundvelt outside of Goblin tribal, since we can only cast Goblin creatures that we exile, but it's a dang solid inclusion in those tribal decks. I've heard some buzz that it might be good in other 60-card formats, but I'm not the right person to ask about that.

Speaking of Goblins, Squee has returned! Squee, Dubious Monarch continues the theme of Squee being able to come back from the dead by exiling four other cards and casting him from the graveyard (basically like the Escape mechanic from Theros Beyond Death). I doubt he'll drum up much interest as a mono-red commander, especially given the more obvious synergies of his other iterations, but in the 99, he'll fit in nicely as a helpful token-maker and recurrable creature for Goblin theme decks.

We've been getting a few iterations of red spells that deal five damage to each creature with the likes of Burn Down the House and Delayed Blast Fireball, and Temporal Firestorm is the newest addition to that suite. This version gives us the option to protect one or two creatures before we wipe the board. However, it's a steep cost to pay. Seven mana to protect one thing, and then nine just to save two. And on top of that, you have to be in Jeskai.

There are better board wipes in those colors, and it's already competing with the previously mentioned Delayed Blast Fireball, which doesn't even affect our creatures. If the average Commander player is running three to five board wipes in their deck, I don't think this will make the cut.

Balduvian Berserker allows us to Enlist one of our bigger creatures and potentially kill something if it dies in combat. On its own, I don't think it's that impressive, but if your commander can increase its power, like Xenagos, God of Revels, you can Enlist Xenagos (if he's a creature), then at the beginning of combat make Balduvian Berserker a 14/3. Now you either have a giant attacker or a way to remove the biggest thing on board.

Jaxis, the Troublemaker can make a copy of the Berserker, Enlist one of our creatures, and then die at the end of turn from the Blitz ability, drawing us a card and removing anything on board. It's simple and relies on us having a big enough creature to Enlist, but this is one example of how I think Balduvian Berserker can be effective in Commander if you have a way to reuse its ability again and again.

Temur Battle Rage + Dual Strike! I'm a big fan of versatile spells and I think Twinferno will find a home in many spellslinger decks. I love versatile spells like these because they're useful at any point in the game. If your commander can get big, like Kalamax, the Stormsire or Veyran, Voice of Duality, then Twinferno can either be a wincon or it can simply copy the most useful spell at your disposal. Either way, I expect Twinferno to be one of those underrated cards that'll always surprise opponents.

The last card I want to mention is yet another versatile spell that honestly looks a lot like Abrade. It still deals with artifacts, but with the twist that it can deal one damage to each creature our opponents control instead of dealing three damage to just one. Being able to deal with one creature with defender won't be relevant in most games of Commander, but who knows, Arcades, the Strategist is the most popular Bant commander, and he just got a suite of new Walls from this set.

So the question is, do we want the mini boardwipe over bolting one creature? It might come down to what your meta looks like. If you play against a lot of token decks, this could be a good inclusion. Otherwise, I wouldn't swap out your Abrade just yet.

I won't lie, I'm a bit relieved after looking through this set. Most of these new cards fit into specific deck types, like Domain, which favors five-color decks. There aren't many "must-includes" types of cards in this set. I know I'll personally be keeping an eye on the Defiler cycle and see how they play out. Will that life loss end up being too costly? Do you plan on putting them in decks with more than two colors? Let me know what red cards you're excited about in Dominaria United!