Let's Get White Into It!

Much like Dominaria before it, Dominaria United is shaping up to be a fantastic set for our format. Tons of powerful cards, plenty of legends, and best of all, Phyrexians!

Let's not waste any time and see what goodies this set has in store for us!

Only one card in, and we already have a banger! Serra Paragon is the exact kind of white mythic I love to see: a big flying Angel with card advantage stapled to it.

Sure, it doesn't draw you cards in the traditional sense, but being able to bring back any of your small permanents for another go is definitely a solid way to accrue advantage over time. Nabbing back an Esper Sentinel, Ranger-Captain of Eos, or Aura of Silence seems fantastic in any mono-white deck, and it only gets better once you branch out into other colors! Being able to recur some sweet cards like Mystic Remora, Dauthi Voidwalker, Ashiok, Dream Render, or even Underworld Breach just seems awesome! This isn't even taking into consideration that Serra Paragon also does a light Crucible of Worlds impression, being able to buy back lands like Ghost Quarter a single time from your graveyard too, which is just delightful.

I don't know how much use this card will see outside of mono-white, but I wouldn't be shocked if it popped up in a whole lot of decks. Having some play in the graveyard is something nearly every deck will want access to, and having another option, especially on such an efficient creature, is welcome!

Anointed Peacekeeper isn't really for EDH, so I won't spend a whole lot of time on it.

This card is aimed at 60-card formats as a way for white aggressive decks to be able to have a bit more interaction and resiliency. For all intents and purposes, in the context of Commander, it's a worse version of Elite Spellbinder or Vendilion Clique, two cards that appear in under 1,600 and 3,700 decks respectively, which isn't all that impressive.

Anointed Peacekeeper is a neat new style of card for competitive formats, but for the average EDH deck, it's a pass.

Danitha is back and she's sporting all the same keywords, plus an ability that cares about Auras and Equipment again!

The former Danitha Capashen, Paragon is only helming 160-ish decks to her name, but she's currently showing up in the 99 for a whopping 28,500 Aura and Equipment lists! That's an incredible amount!

However, even though Danitha, Benalia's Hope dabbles in a similar space, I'm unsure if she will end up having the same adoption rates as her previous card. Where Danitha Capashen, Paragon will benefit playing lots of cheap Auras and Equipment, Danitha, Benalia's Hope is best when you cheat out expensive and costly modifications, such as Eldrazi Conscription or Kaldra Compleat. While I don't think this is inherently bad, I do think that her application ends up being a bit more narrow. She costs more mana than her original, and only "cheats mana" on a single card, as opposed to any Equipment and Aura, which is quite a large distinction between the two.

So she might be a bit more narrow than her first card in terms of saving you mana, but what if we looked at her slightly differently? Another way to utilize this new Danitha is as a way to Refurbish old Auras and Equipment from the graveyard! Instead of utilizing her as a way to cheat out large modifications, I think she can fulfill one of your deck's slots for recursion. Being able to recur a Mantle of the Ancients or Embercleave after they get blown up is big game, and Danitha here has an excellently statted body to make use of them!

Like her previous card, Danitha, Benalia's Hope is a solid card that will help bolster very specific strategies from inside the 99 as opposed to being the commander herself. I think white has better options for Auras and Equipment commanders with Light-Paws, Emperor's Voice and Sram, Senior Edificer respectively, but she will be a welcome addition to any of these decks!

I just want to preface this by saying that all of the Defilers are good. No matter which one you think is the worst, it is still a great card, full stop.

While I wished the 1/1s that Defiler of Faith created were Phyrexian Soldiers, I don't want to split too many hairs. We've wanted white ramp for a long time, so a card that can trade one of white's most abundant resources, life, to cheat on the cost of white permanents is really awesome. This is great in mono-white decks or base-white decks that want to generate a bunch of bodies. If you play a deck that abuses Whitemane Lion self-bouncers, you could get a lot of mileage from the Defiler cutting down on those mana costs.

I'll be trying it out in my Obzedat, Ghost Council deck, since I run quite a number of Soul Warden effects in there and can easily offset the life loss. I would suggest taking any of the Defilers out for a spin if you have mono-color or heavy-color-leaning decks. Phyrexian mana is one hell of a mechanic, and if you haven't played with it before, you should do yourself a favor and remedy that immediately.

Guardian of New Benalia is another card, like Anointed Peacekeeper, that isn't really for us EDH folks.

It's a solid creature with a handful of abilities, none of which really make an impact on our format. It can fill in the curve of Soldier decks, or could be some really cute tech for an Eligeth, Crossroads Augur decks, but otherwise, its applications are incredibly niche.

Sorry, Guardian of New Benalia, you look really good... just not in our format. 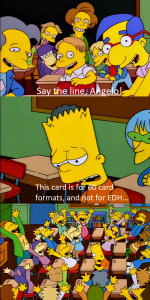 Yet again, we've got another card that won't be doing a whole lot for EDH.

A big Portable Hole is s great card, but not for casual EDH. If you want a solid board wipe that's stapled to an enchantment, look at Out of Time. It only hits creatures, but importantly, it hits commanders too, giving you a semi-permanent way of dealing with them. Temporary Lockdown, on the other hand, is going to scoop up a couple of mana rocks if you're lucky, and that's it. If you wanna mess with people's mana bases, be more direct and use Armageddon or something.

Temporary Lockdown is not Culling Ritual. It's temporary, narrow removal, and in most instances, not worth the slot.

Superfriends decks, rejoice! We've got a Saga just for you!

Sagas have always been a great way to accrue value, and Read Ahead simply brings that to another level. Instead of just being a self-contained value engine, Read Ahead Sagas are now also charms, giving you three options to choose from whatever you cast them. This means that the power of Sagas have gone up across the board in Dominaria United, and Urza Assembles the Titans is no exception.

Need to sculpt your next few draws? Scrying for four cards has you covered, and you can even draw a 'walker to boot! Have a six-mana planeswalker you want to get out a turn early? Well, chapter two can let you just plop them onto the battlefield! Oh, hey, are you one turn away from ult-ing your Elspeth, Sun's Champion or Tamiyo, Field Researcher? Well, chapter three will net you an extra activation out of nowhere and ruin all of your opponents' days!

Don't get me wrong, Urza Assembles the Titans is only good for a small subset of decks, but in those decks, I think it can do a ton of work. If you have a planeswalker deck, I would look to try and slot in a copy of this and see how it feels. I know I'll be testing it out in my Djeru list!

Ah. Finally. A white card that is the worst of its cycle. Nature is healing!

Valiant Veteran is a fine card, but it doesn't do a whole lot, even for Solider Decks. Sure, it's an anthem on board, and can even hand out counters to your rebuilt team after your board gets wiped... but that's kinda... just meh, right?

If it had a way to protect your board from the graveyard, or gave you something to do with your tokens, I'd be a lot higher on this. As of right now, this is a card for Soldier tribal, and not much else.

And there we have it! All of the relevant white cards for Commander!

Because of the heavy gold nature of the set, there weren't a lot of cards to go over in this review, at least when compared to a set like Kamigawa: Neon Dynasty. Due to that, there were more misses than usual, since a lot of these cards weren't aimed at us. Overall, though, I think white got a solid showing this time around! Quality over quantity, right?

I'm particularly impressed with Serra Paragon and Defiler of Faith, and I can't wait to find homes for them in my lists! How about you, though? Do you have any favorite white cards from this list, or any that you think I forgot? Make sure to let me know down below, and don't forget to check out more set reviews here on EDHREC and over at Commander's Herald as well!

You can reach me on Twitter (@thejesguy), where you can always hit me up for Magic- or Jeskai-related shenanigans 24/7. Do you have any comments, questions, or concerns? Please don’t hesitate to leave them below or get in touch! Stay safe, wear your mask, and keep fighting the good fight. I support you. No justice, no peace.